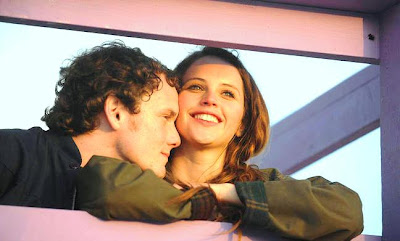 By Edward Copeland
Many good and great films have come to the attention of cinephiles after garnering attention at the Sundance Film Festival. Unfortunately, just as often it seems to turn out that little indies that charge from the fest with buzz or prizes turn out to be ho-hum enterprises as is the case with Like Crazy, which won 2011's Grand Jury Prize for Dramatic Film. It also received a Special Jury Prize for Dramatic Acting for its lead actress Felicity Jones and at least that honor wasn't a case of overstatement since by far Jones turns out to be the movie's best attribute.

Directed by Drake Doremus, who co-wrote Like Crazy with Ben York Jones, the film tells the story of young love between an English girl named Anna (Jones) and an American boy named Jacob (Anton Yelchin) who meet while both attend a Los Angeles university. Their romance proves so intoxicating that Anna forgets the little matter of overstaying her student visa by a couple of months. She returns to the U.K. to touch base with her very indulgent parents (Oliver Muirhead, Alex Kingston), though she's slightly miffed that Jacob nixes any idea to join her in Britain for the two month stay.

A crisis erupts when Anna attempts to come back to the U.S. when immigration flags her visa violation and deports her back to Britain — something that seems to take everyone by surprise (Apparently, neither the young adults nor her parents heard anything about 9/11). Can Anna and Jacob maintain a long-distance romance? What about Jacob's burgeoning furniture-making enterprise in L.A. and Anna's job doing whatever it is she does for Finola Hughes in London?

Jones gives a performance so much better than the film deserves. Like Crazy plays as if it began life as a short film but somehow got out of hand. Doremus, whose previous film I haven't seen but was charmingly called Douchebag, directs the movie as if he had a book open on his lap called "French New Wave Tricks" and he employs most of them — and poorly.

Like Crazy overflows with abrupt cuts, sped-up motion and all the other moves that can be effective when used for a purpose by a director who knows what he's doing but which come off here as if he's throwing the techniques against the figurative wall to see if anything sticks. Unfortunately, none do so they end up resembling mere gimmicks.

Of the 15 films that Like Crazy competed against at Sundance, I've seen or started to watch seven so far (I gave up on Circumstance and Higher Ground) but based on the other five (Another Earth, Another Happy Day, Take Shelter and especially Pariah and Terri) plus reviews and word of mouth on the rest, I feel safe in presuming that most were substantially better than the mishmash of Like Crazy. (For those interested, those I've yet to see are in alphabetical order: All She Can, The Art of Getting By, Gun Hill Road, Here, The Ledge, Little Birds, Martha Marcy May Marlene and On the Ice.)

Despite the scattershot filmmaking style, Jones somehow delivers a good performance as Anna, though the title misleads. It implies that someone will be a little emotionally unbalanced, but that's not really the case. Yelchin does OK, but Jones overpowers him in the acting department. Jennifer Lawrence gets a few nice moments as a girl Jacob starts seeing during his separation from Anna, but she doesn't get a lot to do. In fact, Lawrence was given more to do as the young Mystique in X-Men: First Class than her Like Crazy role offers.

Jones provides the only possible incentive to see Like Crazy but, as good as she is, I don't know if her performance justifies sitting through it.