"Life's a mess, dude — but we're all just doing the best we can" 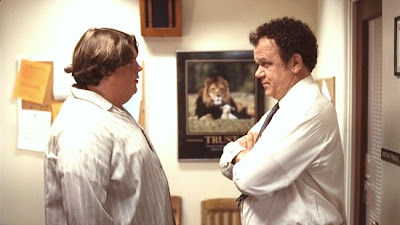 By Edward Copeland
When perusing year-end award nominations for films that escaped my notice, often the result can prove disappointing (as in the case of Sundance Grand Prize winner Like Crazy). Other times, they turn out to be gems such as Terri, which lost that Sundance prize to Like Crazy, but whose script by Patrick de Witt from a story by Azazel Jacobs and de Witt has been nominated for best first screenplay by the Independent Spirit Awards — and deservedly so.

In a way, Terri resembles a superior, off-kilter version of the largely forgotten (and flawed) 1995 film Angus about an overweight teen's struggles in life and school. While Angus tended to be more conventional in its approach as the title character dreamed of the class beauty, had a gawky friend and lived with his single mom (Kathy Bates) and colorful grandfather (George C. Scott), Terri's approach couldn't be more different. Terri Thompson (Jacob Wysocki) is 15 and lives with his Uncle James (Creed Bratton of The Office) since his parents abandoned him and attends school wearing pajamas.

Life at home isn't easy. Uncle James' health tends to rise and fall, so Terri cares for him as often as the other way around. At school, his attire targets him for even more razzing than usual but it also catches the attention of the high school's unusual principal, Mr. Fitzgerald (another great John C. Reilly turn), who schedules Terri to have regular Monday meetings with him. Soon, Terri realizes that Fitzgerald sets these conferences with many of the school's outcasts, yelling at them sometimes — though he admits to Terri he just does that for the benefit of his secretary, Mrs. Harnish (Mary Anne McGarry).

The odd relationship that develops between Terri and Mr. Fitzgerald drives Terri, thanks to de Witt's great screenplay and Wysocki's performance. He and Reilly create a great rhythm between them, one that takes on a third measure when another of the school's outcasts, Chad Markson (Bridger Zadina), latches on to Terri.

Also giving a fine performance and becoming part of this unusual circle is Olivia Croicchia (Denis Leary's daughter Katy on Rescue Me) as Heather Miles, a precocious girl caught in a sex act during home ec and then ridiculed throughout school.

Describing Terri in details that come off too vivid would be doing a disservice to work as delicately wonderful as this. It isn't a matter of ruining twists by revealing spoilers — simply, I wish people to experience Terri for themselves, knowing as little as possible, the way I did.

Jacobs shows himself to be quite deft as a director by never hitting the wrong tone in this dramedy or trying to force laughs or pathos onto a scene. His cast helps him accomplish most of this, particularly Wysocki in his breakout role and the always reliable Reilly.

Terri belongs to that group of films that's likely to disappear eventually. It shouldn't — movies this special shouldn't vanish once the glare of awards season has passed, especially when only the smaller prize-givers noticed it in the first place.