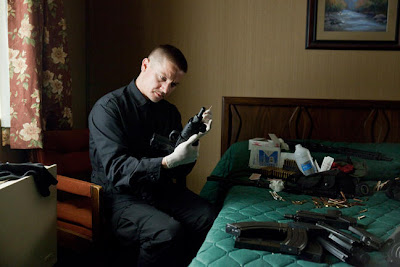 By Edward Copeland
As an actor, Ben Affleck has proved very inconsistent throughout his career, but as a director, he's proving to be much more reliable as he shows in his second feature, The Town. While Affleck also casts himself as the lead and does have some weak moments in the emoting department, fortunately he's surrounded himself with an excellent ensemble to make up for his deficiencies.

The Town doesn't come off as well as Affleck's directorial debut Gone Baby Gone, starring his more talented (in terms of acting) brother Casey did, but it's still a highly involving crime drama, even if parts of it seem as if they were boosted in a heist from other movies.

Ben Affleck also took part in the writing, sharing screenwriting duties with Aaron Stockard and Peter Craig in adapting the novel Prince of Thieves by Chuck Hogan. (Affleck does have an Oscar for writing, if you recall, with Matt Damon the script for Good Will Hunting, though Damon acts better than he writes. I digress.)

The title refers to the Charlestown section of Boston, which has gained a reputation as the bank robbery capital of America, thanks to breeding generation after generation of gun-wielding thieves. Affleck plays Doug MacRay, the leader of a small but effective crew that has thwarted authorities for quite some time, getting under the skin of one particular FBI special agent, Adam Frawley, (Jon Hamm, who looks so out of place in a modern story).

As the film opens, Doug and his crew, including his borderline psychotic friend James Coughlin (Jeremy Renner, who gives a performance even better than his fine work in The Hurt Locker) are pulling off a bank job and because of the circumstances, end up having to take the bank manager (Rebecca Hall) hostage.

They later release the woman unharmed but some time later, Doug encounters her by chance in a laundromat. The crooks were all wearing masks and after some vague but probing questions, he realizes there's no way that she could recognize him. Unfortunately, Doug also find himself attracted to the woman, whose name he learns is Claire Keesey and she lives within blocks of him and the other robbers.

Needless to say, this presents problems for just about everyone involved, but in a film such as The Town, it really isn't fair to go into much plot detail for those who haven't seen it. Don't worry: It has plenty of other aspects worth discussing.

Affleck's direction keeps things taut when they need to be and moving when that's required. His staging of the climactic action scene plays like it's a smaller-scale version of the crooks versus cops gun battle in Michael Mann's Heat, but he does manage some nice touches elsewhere. It's hard to say who contributed what to the screenplay, but it's mostly good, though the dialogue does have some clunkers.

In his role as Doug, Affleck places himself as the center of the movie and while he doesn't give a bad performance he has surrounded himself with so many performers who deliver great ones, that he stands out, especially since he has the majority of the screen time. It's not as if he's incapable of delivering the goods, as he's shown in films such as State of Play and Hollywoodland, but I can't help but wonder if he spread himself too thin here and if he'd just wrote and directed The Town and someone else played Doug, it would be even better.

The more I see of Rebecca Hall, the more I like her. I thought that after Penélope Cruz, she was the best thing in Woody Allen's Vicky Cristina Barcelona, but she's really good here, though she gave her best 2010 performance in the too-little-seen Please Give.

As I mentioned earlier, the film's standout is Jeremy Renner's James. It's easy to overdo a psycho, especially when you are trying to throw a Boston accent on top of it, but he manages to avoid both traps and score on both counts. When he's on screen, you can't take your eyes off him and he gets most of the film's best speeches.

Jon Hamm does fine, though at times it does seem as if you are watching Don Draper, FBI Agent. It is good to see him paired with Titus Welliver though.

Chris Cooper turns in a great single scene as Doug's father who is languishing behind bars for crimes he has committed.

The other truly standout performance comes with a tinge of sadness. The late Pete Postlethwaite really brings it on as Fergie, the crime boss who the crew works for but hides behind his work at his flower shop at a cover. He's truly menacing and though Postlethwaite still has another film that will be his final screen appearance, this would have been a great swan song, especially after Inception which creepily seems now as if we were watching him on his real-life deathbed and he barely said anything audible.

The Town could have been tightened, but the great acting and solid action makes it enjoyable enough.