Not just a Bigelow 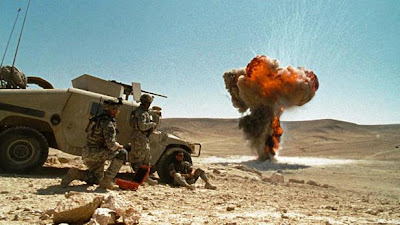 By Edward Copeland
Kathryn Bigelow has had many fans as a director for a long time, something that always has been inexplicable to me since most of her previous film work has been sadly lacking. I didn't care for the vampire tale Near Dark. Blue Steel was laugh-out-loud bad, thanks mainly to a beyond-over-the-top performance by Ron Silver. Point Break's creativity ended with bank robbers wearing masks of former presidents as Keanu Reeves, Patrick Swayze and Lori Petty raced to see who could drive an audience member to suicide first. Strange Days certainly had its moments, but in the end was mostly a sci-fi muddle. Then again, it was written by her ex-husband James Cameron, and as we all know, writing has never been his strong suit.

Poor Bigelow even got the chance to direct some episodes of Homicide: Life on the Street, though they were unfortunately later season episodes after NBC meddling and Tom Fontana acquiescence had made the once-great show a shadow of what it once was.

That's why it is so great to report that all the acclaim that Kathryn Bigelow has received for The Hurt Locker is not just fanbase hype: She deserves the kudos because it's by far the best movie she's ever made without any qualifications.

Actually, I do have at least one qualification about The Hurt Locker. The movie opens with a quote that just too neatly underlines the film's point in BIG BOLD LETTERS. It's unnecessary and, in a way, undermines what could be a more powerful ending. That aside though, The Hurt Locker is very good, thanks mainly to the lead performance of Jeremy Renner and the nonstop, visceral direction by Bigelow.

Renner plays Staff Sgt. William James, who leads an explosive detonation unit in Iraq. If you've ever seen a film with a suspenseful sequence that involves disarming an explosive, imagine a two-hour-plus film made up almost entirely of those scenes. Renner's James is an adrenaline junkie, who finds each new device a challenge to disarm, no matter if it puts his life or others at risk.

Bigelow employs a myriad of techniques to keep the movie moving at a kinetic pace through sudden zooms, fascinating closeups and interesting vantage points of explosions. Truly, Bigelow's direction proves to be the star of the film, aided immensely by her editors Bob Innis and Bob Murawski and cinematographer Barry Ackroyd. The screenplay by Mark Boal may be the weak link. It's fine, but it's really just a template for Bigelow to work her magic and Renner really is the only character aside from Anthony Mackie that stands out. This isn't a writer's movie: It's a director's film.

For as long as The Hurt Locker has been circulating (it was nominated at last year's Independent Spirit Awards), I was surprised to see some well-known actors pop up in small roles who I didn't even know were in the film.

Iraq war movies have not done well at the box office or critically, but The Hurt Locker succeeds because this could be any war and the politics aren't even brushed upon. The film just focuses on men doing a very dangerous job and Kathryn Bigelow brings it vibrantly alive and Jeremy Renner creates a character to remember.