From the Vault: Heat 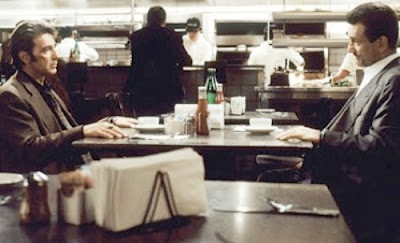 Sometimes more is less, as in Heat, where more judicious cutting could have turned a good film into a great one.

Even though its length weighs down Heat, most of what's there rivets the viewer enough to make the point moot.

Pacino plays Vincent Hanna, a workaholic L.A. detective on his third marriage who becomes consumed with tracking down a band of exceptional thieves. The crooks follow Neil McCauley (De Niro), a cool, professional loner who advises his partners never to make attachments they can't drop at a moment's notice if the police get too close.

As one might expect, Pacino and De Niro bring out the best in each other, especially in their main scene together where the adversaries share coffee and conversation in a diner. The verbal volleys make for mesmerizing acting tennis.

The rest of the cast excels as well, including Val Kilmer and Jon Voight as De Niro associates, Ashley Judd as Kilmer's wife and Ted Levine, Wes Studi and Mykelti Williamson as members of Pacino's team.

The story Heat tells proves so complex that it isn't easy to absorb it all in one viewing. It may sound unseemly to criticize the movie for ambition, but many scenes could have excised without losing any of the scope. For example, a plot strand involving a bad apple on De Niro's team widens to include the fact that the robber also serially kills prostitutes, a completely unnecessary development.

Many of the romantic elements, including Pacino's troubled marriage and his distraught stepdaughter, also add little to the movie. The focus should remain on the two professionals on the opposite sides of the law and their symbiotic relationship. Without each other, they have no purpose.

As in Mann's Last of the Mohicans, the technical credits are impeccable, with great sound and cinematography that contribute greatly to the film's success as in a conversation on a balcony overlooking the lights of Los Angeles.

Heat also finds itself blessed with one of the year's most subtle and best musical scores by Elliot Goldenthal, a pulsating piece that underscores the action without drowning out the movie itself. For fans of action melodrama, Heat is one of the best recent efforts in the genre, despite its flaws.

When did you write this review? It takes a while for the greatness of a classic to sink in.

Heat is, indeed, a classic now. One of the best films of the 90s hands down and featuring Michael Mann's best work as a writer and director.

Mann makes films that can feel underwhelming at first. Only upon repeated viewings does the true energy and art emerge.

I recently saw it again on the big screen. Don't have the space here to explain why, but it is a brilliant piece of film-making. It goes from channeling 40 noir to 70s TV neo-noir where Mann cut his teeth as a writer to transcending the themes of the genre in a way that matches the likes of Vertigo - which resonates in Heat with the duality of the two main characters and the musical score too.

And L.A. is alive in Heat. I've lived in Los Angeles and just the opening shot of Heat, Mann makes me feel L.A. in a way I've never before seen on film. He did it too with Collateral.

That shows his talent. If David Lynch has a pipeline from his dreams and subconscious to the screen, then Michael Mann has a similar ability to take the feel of a city street and pump it directly into his photography.

I wrote it upon its original release. I've seen it since. I think it is good, but I still think it is overlong and could have trimmed some of the fat very easily.