A modern tale set in a time gone by 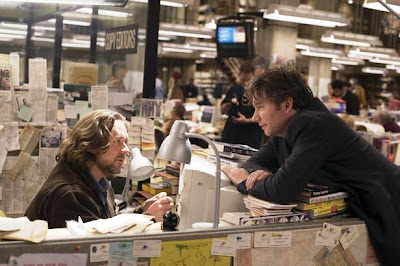 By Edward Copeland
Being a former journalist, even if I was never a reporter, sticking more with copy editing with a side order of criticism, it's always nice to see a film that focuses on a veteran reporter (Russell Crowe) as its hero, even as it acknowledges the financial problems of the industry, the constant corporate changeovers and the ignoring of the bread and butter of the operation, the newspaper itself, as it fumbles around in the Internet age.

However, those are just asides in State of Play, which really is a thriller about solving a mystery and the risks, especially in a place like Washington, of being too friendly with people you might have to cover.

The film is based on a British miniseries and directed by Kevin Macdonald (The Last King of Scotland) from a screenplay by Matthew Michael Carnahan, Tony Gilroy and Billy Ray (who wrote and directed an excellent film about journalism, Shattered Glass).

Crowe stars as Cal McAffrey, a shaggy journalist who drives bosses nuts but comes up with the goods when the chips are down. He immediately causes friction with a rookie reporter Della Frye whose blog is rising on the paper's attempt to cause some Web ripples (Rachel McAdams).

The paper's editor (Helen Mirren) tries to steer them both in the right direction as she copes with yet another new corporate owner. At the film's outset, McAffrey is investigating what appears to be a routine street drug shooting while Della's more gossipy column is working the apparent suicide by subway train of a congressional staffer of a Pennsylvania representative (Ben Affleck).

Not only was the late aide having an affair with the married Affleck, he is the good friend and former college roommate of McAffrey. Of course, nothing is quite what it seems. Rep. Stephen Collins (Affleck) had been vocally trying to expose a Blackwater-type private mercenary force and evidence points toward the affair story being leaked in an effort to silence him.

There are several twists along the way, so to divulge much more of the plot wouldn't be fair. Macdonald moves State of Play along at a very good pace, but I wish it had slowed down at times to ruminate over the many issues it passes fleetingly on the way. The film doesn't stop long to seriously look at the ethical conflict between Collins and McAffrey's friendship and McAffrey's duty to the story nor to the paper's duty itself to tell the truth and not protect corporate friends of the owners and cast ethical clouds on the entire paper.

Perhaps the saddest part of State of Play is knowing that it lives in somewhat of a fantasyland of the past where veteran reporters like McAffrey can actually tutor rookies like Della so they can learn the ropes. In the environment of today's newspaper industry, most of the experienced journalists with institutional memory are pushed into early buyouts and young reporters never gain from their insights, left to their own devices and overseen by editors too preoccupied to offer much professional guidance, further diminishing the product as a whole.