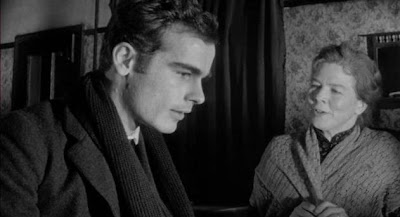 By Edward Copeland
Before I begin discussing the 1960 best picture nominee Sons and Lovers, based on the famed D.H. Lawrence novel and which earned acclaimed Oscar-winning cinematographer Jack Cardiff his only nomination as a director, I'd like to use this occasion to point out yet another reason any true film lover should dump their streaming only Netflix option in favor of DVDs only. Sons and Lovers is one of the few Oscar nominees for best picture that I've never been able to see, but Netflix only carries it on streaming so I've been trying to watch any titles they have only on streaming before I switch to DVDs only. Cardiff filmed Sons and Lovers in luscious black-and-white CinemaScope (actually his d.p., the equally famous and lauded Freddie Francis was the cinematographer on the film). While you will see the opening and closing credits in the intended aspect ratio, the film in between will be cropped and squeezed for no good reason. Other streaming titles are shown in CinmaScope from beginning to end. Another strike against Netflix streaming. You won't get that on the DVD unless it's a DVD that only offers fullscreen.

As you might expect, a film being directed by Jack Cardiff, the brilliant d.p. behind the look of the Michael Powell and Emeric Pressburger classics A Matter of Life and Death aka Stairway to Heaven, Black Narcissus (for which he won the Oscar for cinematography) and The Red Shoes. He also shot Under Capricorn for Hitchcock, The African Queen for Huston, War and Peace for King Vidor (earning another Oscar nomination) and garnered his final cinematography nomination for Joshua Logan's Fanny in 1961. Believe it or not, he even served as d.p. on Rambo: First Blood Part II. The Academy saw fit to give him an honorary Oscar for his long career of exceptional work at the ceremony held in 2001.

Freddie Francis, his d.p. for Sons and Lovers, took home the Oscar for his work on the film. Despite a long list of impressive work, Francis was only nominated for the Oscar one other time — for Glory — and he won. Some of Francis' other films included Scorsese's version of Cape Fear and, his final film, David Lynch's The Straight Story. Also on Cardiff's crew as an assistant director was Peter Yates, who would go on to direct films as diverse as Bullitt and Breaking Away. 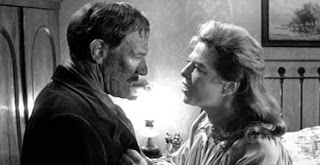 I wish I could say that I've read the D.H. Lawrence novel upon which the film is based, but the title itself makes it obvious that the adaptation by Gavin Lambert (who co-wrote Nicholas Ray's films Bigger Than Life and Bitter Victory) and T.E.B. Clarke (Oscar-winning writer of The Lavender Hill Mob) has taken some big liberties from the book. I mean the title indicates multiple sons, but aside from one brief scene that kills off Arthur (Sean Barrett), son of Walter and Gertrude Morel (the great Trevor Howard and Wendy Hiller, by far the film's greatest asset beyond its look and design), a couple of scenes with their son William (William Lucas), who lives in London, the film revolves around their son Paul (Dean Stockwell).

According to summaries of the novel online, Lawrence's book begins with a focus on the turbulent marriage of Walter, a working class miner in Nottingham, England, with a penchant for liquor and Gertrude, who develops unhealthy attachments to her sons. William still moves to London in the book, but is the eldest son and Gertrude's favorite, though he takes ill and dies. Arthur is an afterthought in the book and they also have a sister named Annie who doesn't exist in the film at all. None of the children follow dad into the mines. A near-death experience for Paul (in the novel, not the film) makes Gertrude transfer her obsession to him. Aspiring to be an artist, he gets a chance to move to London when a patron (Ernest Thesiger, who played Dr. Pretorious in 1935's Bride of Frankenstein) sees promise in Paul's work, but Paul abandons his chance to leave when he witness an incident of his drunken father mistreating his mother and stays, fearful of what his lout of a dad could do to his mom.

His mother also subtly and not so subtly interferes with Paul's romances, first with the overly pious Miriam (Heather Sears), who teases the poor lad unmercifully. and later with the married but separated suffragette Clara (Mary Ure) he meets when he takes a job at a sewing factory. (His boss is played by Donald Pleasence). While Miriam runs frigid, Clara burns hot and Paul eats her up, much to the disdain of Clara's cheating husband and his possessive mother.

Howard was nominated as best actor, though he's really supporting and deserved a nomination there. Ure was nominated as supporting actress. Hiller didn't get remembered at all, which is a shame. Given the five films up for best picture in 1960, they all were going to finish a distant second to Billy Wilder's The Apartment. John Wayne's starring in and directing The Alamo automatically lands in fifth. The middle three are tightly bunched, but I believe I'd rank Elmer Gantry second, then The Sundowners, and place Sons and Lovers fourth.

What finally brings Sons and Lovers down that low, despite its gorgeous look and design and mostly superb acting, is Dean Stockwell, who sticks out like a dandelion in a bouquet of roses. Amidst all this British authenticity, including filming on many locations that D.H. Lawrence actually traversed, Stockwell just doesn't belong. His accent isn't horrible, but he's so recognizable as an American (he was born in Hollywood and began acting as a child in the 1940s after all), you know that he wasn't spawned by Trevor Howard and Wendy Hiller. Supposedly, one of the producers, American Jerry Wald, insisted on casting an American in hopes of better U.S. box office. Stockwell can be a great actor but when you think of all the marvelous actors in the right age range circulating in the U.K at that time, what a boneheaded move. Imagine if this film had starred an O'Toole or a Finney or a Caine or a Richard Harris or an Oliver Reed or an Alan Bates or a Laurence Harvey. It could have saved the movie.