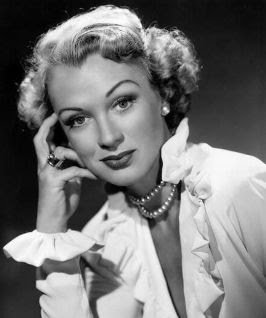 By Edward Copeland
Nearly every time you see Eve Arden on screen in black-and-white, she seemed to have a cigarette firmly ensconced in her hand. Somehow it was appropriate that embers would be slowly dripping off her smoke since inevitably sparks would be flying from the dialogue emanating from her lips. In fact, her photo should appear next to the definition of wisecrack in the dictionary. Born Eunice Quedens on April 30, 1908, Arden almost always was the girl Friday or best pal to other stars, but she many times she ended up being the best thing in bad films, raised good films to a higher level and was just plain fun more times than not. Her lengthy time in film led to a longer time in radio and television. Along the way, she managed one Oscar nomination and several Emmy nominations, including one win. She even appeared in the infamous Broadway flop Moose Murders, though she was replaced during previews before the show got its one night run. In only her second film appearance as Eve Arden, she played one of the many smart-mouthed broads trading barbs in the Footlights Club boarding house for aspiring actresses in 1937's Stage Door. With Katharine Hepburn, Ginger Rogers, Lucille Ball and Ann Miller among the many cracking wise, Arden might have been lost, but she's easy to spot since in nearly every one of her scenes she uses a white cat as a prop, usually draped around her neck like a scarf.

In 1939, she got to hold court with one of the kings of fast-talking comedy, Groucho Marx, in At the Circus. The first role that really allowed her to shine was as model scout Cornelia "Stonewall" Jackson in the 1944 musical Cover Girl. She got to be the voice of reason and a funny voice at that. When her older boss sees a vision of a lost love of his past in Rita Hayworth, he asks Cornelia 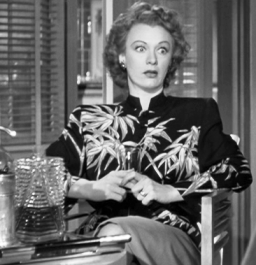 what she would do if she saw her youth walk through the door. "I'd put braces on its teeth," she replies. The next year, she got one of her very best roles and earned an Oscar nomination as Joan Crawford's friend and business associate Ida Corwin in Mildred Pierce. Ida saw through Mildred's good-for-nothing daughter Veda (Ann Blyth), even if Mildred couldn't see it. "Personally, Veda's convinced me that alligators have the right idea," Ida tells Mildred. "They eat their young." In 1946, she again got to play the best friend, this time to Barbara Stanwyck in a dreadfully dull melodrama My Reputation that Arden tries single-handedly to drag kicking-and-screaming into the realm of romantic comedy. Alas, she fails in the effort. That same year, she showed her ability to surprise: Taking the role of a French chanteuse in the whitewashed Cole Porter biopic Night and Day with Cary Grant. Perhaps tired of 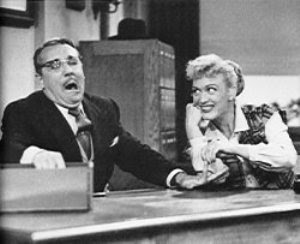 always being second (or third) fiddle in film, Arden moved to radio where she created the role of high school teacher Connie Brooks, which she transferred to TV in 1952, sparring with harried principal Gale Gordon in his pre-Lucy days and teaching Richard Crenna with his wonderfully fake cracking adolescent voice. The role brought her an Emmy and several nominations and she tended to stick to television for the rest of her career, though she did venture back on the big screen now and then. In 1951, she was the best thing in Three Husbands, a better idea than a movie that attempted to spoof A Letter to Three Wives. In 1959, she was girl Friday again, this time to lawyer James Stewart in Otto Preminger's Anatomy of a Murder. Of course, for the younger out there, perhaps Arden always will be best remembered as Principal McGee of Rydell High in Grease and Grease 2. Remember, if you can't be Eve Arden, be an Eve Arden supporter. 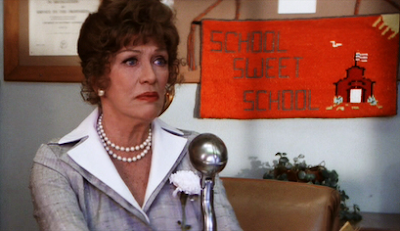 Comments:
Great job, Ed - a fine tribute to one of the cinema's most indispensable character actresses.

When I saw Grease, I recognized Eve from The Mothers-In-Law. Though it only ran for two seasons, the glory that is syndication brought Eve (and Kaye Ballard, of course) into many homes in the 1970s.

I wish the show would come out on DVD, just so I could see if it holds up over 30 years later.

The Mother's IN law is out on DVD all the episodes 7 disc total. I remembered my mother would watch this show faithfully. I have it and got it from AMAZON. Wonderful Extra's...Iris Mercado - Delaware