You can't get blood from a stone 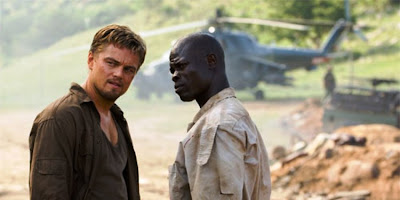 By Edward Copeland
You also can't generate interest from a bore and nothing surprised me more than how uninterested I was watching Blood Diamond, almost to the point that I considered not writing anything at all because I find so little to say. Sure, the performances are good — Leonardo DiCaprio keeps getting better with age — but the story itself left me cold, something that's not helpful for a film that runs about 2 1/2 hours long.

It's puzzling — because the film raises so many interesting issues involving the exploitation of Africans, especially children, to finance the world's diamond trade yet it ends up playing as if it's just an action film, and not a particularly interesting one.

DiCaprio is good. Djimon Hounsou is fine — I've never quite understood all the adoration he's received since Amistad. Every performance of his seems to be the same to me whether he's playing a 19th-century slave, a New York resident suffering from AIDS or the African who finds a valuable gem here and fears for his family's future.

To me, the biggest surprise in Blood Diamond turns out to be Jennifer Connelly. She seems to be working in reverse from the so-called Oscar curse on supporting actress winners. I thought she won for a nothing role in A Beautiful Mind, but since then she's really impressed me, first in House of Sand and Fog, to a lesser extent in this year's Little Children and now in Blood Diamond.