More than any of us can bear

BLOGGER'S NOTE: This review originally ran on this blog on Aug. 9, 2006. I'm re-posting it for The Oliver Stone Blogathon occurring through Oct. 6 at Seetimaar — Diary of a Movie Lover 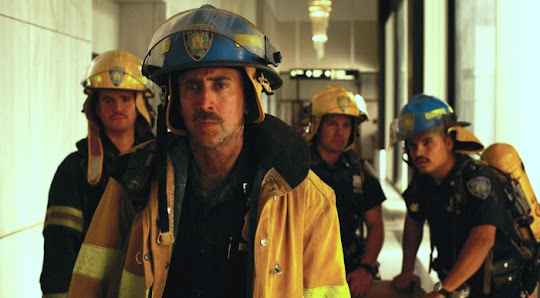 By Edward Copeland
I finally caught up with Oliver Stone's World Trade Center and, as indicated by many reviews, it certainly qualifies as the least Oliver Stone-like film Stone has made (though Oliver can't resist tossing in a couple of ghostly images of Jesus in a light but hey, at least it wasn't a mystical Indian). World Trade Center does end up being Stone's best work in quite some time.

Like most Stone movies, it contains fat that could be lost easily and in the battle of 9/11 movies, I still prefer United 93, even though Stone's film contains good performances. Cage gives his best straight performance in ages. Yes, I loved him in Adaptation, but I can't remember the last time he played a dramatic role in a movie that wasn't a time-waster.

He's also ably supported by Michael Pena as the fellow Port Authority officer trapped with him beneath the rubble, and Maria Bello as Cage's wife and Maggie Gyllenhaal as Pena's wife, awaiting word on their husbands' fates. If I prefer United 93 to World Trade Center, it's for one main reason: the emotional wounds of 9/11 remain so fresh, that it seems almost unnecessary to tell personal, albeit true, stories to wring emotion from a viewer. The relative anonymity of the passengers depicted in United 93 touched me more deeply than the fleshed-out stories in World Trade Center did, especially when they tack on a lapsed paramedic (Frank Whaley) and a former Marine (Michael Shannon) who abandons his office job, throws on his old uniform and marches into Ground Zero to help.

World Trade Center depicts well the confusion and communications breakdowns on 9/11, where the first responders themselves don't realize that a second plane has hit the second tower until well after they've arrived on the scene of the first tower.

As you expect from a Stone production, his production team delivers top-notch technical aspects. While World Trade Center as a film comes off as Stone's finest in ages, it's difficult to compete with the real images we saw that day. Paul Greengrass found a way to accomplish that in United 93. While Stone's film offers good performances, somehow the personal touch ends up being less emotionally satisfying.