The heroism and tragedy of United 93 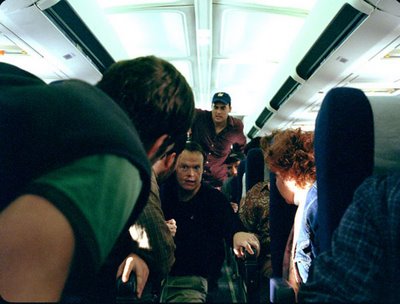 By Edward Copeland
As luck, DVD release dates, Green Cine queues and the U.S. Postal Service would have it, I caught up with United 93 just in time to review it on really the only appropriate day to review — the fifth anniversary of the 9/11 attacks. For a story, that at least in the abstract, so many of us know so well, Paul Greengrass has written and directed quite a compelling motion picture.

What's even more impressive is the approach Greengrass takes, filming it as if there had been hidden cameras in multiple locations five years ago today. At first, the lack of characterization bothered me but as it went on, I came to realize that was the most appropriate course to take — toss in background on the heroic passengers and crews and you could have wound up with a downbeat edition of the Airport franchise.

In fact, the one person who stood out to me as giving the best performance turned out to be the real head of the national air traffic control center in Herndon, Va., Ben Sliney playing himself. Greengrass filled the cast with many of the real people involved that day — air traffic controllers, military, etc. — and when he couldn't fill the parts with their real counterparts, he often looked to their profession. A real United Airlines pilot and a real United Airlines stewardess assume those roles for the film.

The professional actors who do play passengers are, for the most part, faces who look familiar but who aren't stars that would distract from the reality Greengrass presents. Included are Peter Herrmann (at left) perhaps best known as Mariska Hargitay's husband at awards ceremonies, David Rasche (who always will be TV's Sledge Hammer to me) and a don't-blink-or-you'll-miss-her appearance by Rebecca Schull (Fay on TV's Wings).

The IMDb credits also says that Chip Zien, memorable as the original baker in Stephen Sondheim's Into the Woods on Broadway, and Denny Dillon, a cast member briefly on the worst season ever of Saturday Night Live, also were in the United 93 cabin.

Actually, the plotting of the passengers to take back the plane, while suspenseful, turned out to be the least fascinating part of the movie for me, and not just because I knew how it was going to end. What really sets this apart are the scenes showing the confusion and efforts to deal with the horrifying situation on 9/11 at various air traffic control centers and NORAD. The film stays fairly apolitical, with the exception of a rather clueless military liaison that can't give Sliney any answers.

Going into United 93 I considered the question of is a movie like this "too soon," but that evolved more into a question of "is it necessary?" Everyone who knows the stories has their own ideas in their heads about what transpired on the fateful flight, so fleshing it out seems almost redundant. However, in the masterful hands of Greengrass, I ended up answering "No" to that question as well.

United 93 re-visits a horrifying day and presents it with respect and serves as a celluloid monument to that plane's heroic passengers and crew.

Comments:
I have not seen this, nor will I since I steer clear of Hollowood lies about 9/11 (and most everything else).

Rumsfeld is on record as saying that Flight 93 was SHOT DOWN.

You can see for yourself:

YouTube - Rumsfeld says Flight 93 was "shot down."24 May 2006 ... In a candid moment in front of U.S. troops, Donald Rumsfeld strays from the official story of heroic passengers flying fight 93 into the ...