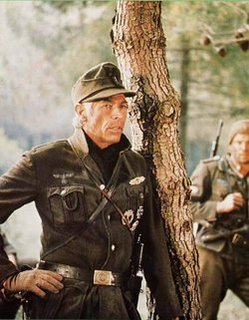 By Edward Copeland
With the strides — if that's the correct word — that Sam Peckinpah made in the depiction of cinematic violence, you would think that he would have found his way to World War II long before 1977's Cross of Iron. (Of course, he had filmed a war movie before in 1965's Major Dundee, but not one set in WWII). While too long and again overusing slow motion, the film is an interesting piece despite its flaws, namely for telling the story from the point of view of German officers. Of course, Cross of Iron does cop out a bit in this regard.

Unlike Clint Eastwood's Letters From Iwo Jima this year which gives a genuinely sympathetic view of Japanese soldiers without going to the extent of showing the soldiers as opposed to their country's efforts, Cross of Iron goes to great pains to separate its German characters from the Nazis and their goals.

The maverick sergeant (James Coburn) who plays the lead role, frequently expresses his disdain for the war, tries to save an adolescent Russian soldier and prevents the rape of some women.

Even the ostensible villain of the piece, an ambitious Prussian aristocrat (Maximilian Schell), makes a point of emphasizing that he does not belong to the Nazi Party. After awhile, all the qualifying remarks started to remind me of the "I hate this case" aside that Mary Steenburgen's defense attorney makes in Philadelphia as she's representing the law firm that fired Tom Hanks.

Despite those moments, much of the movie does prove compelling with Peckinpah providing the horrifying images of war you'd expect him to come up with, such as scenes of tanks rolling over corpses and particularly brutal deaths.

The most puzzling part of Cross of Iron is its lack of forward direction and a particularly odd series of comical freeze frames to wrap up the movie.

It's not one of Peckinpah's best works, but it certainly was a step up from The Killer Elite.

Comments:
I agree - I thought that Peckinpah copped out on the Nazi thing - There's only 1 out-and-out Nazi, and predictalbly, he's a total dirtbag.

Coburn's stay at the hospital is sloppily done, as well. It is just dropped when the time comes to get back to the fighting, and it's as if it never happened.

I beg you not to watch Convoy. It makes The Killer Elite look like a masterpiece.