From the Vault: Philadelphia 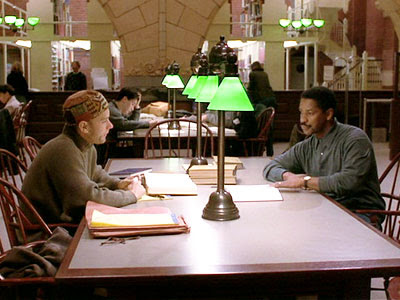 Just because a film covers an important subject, that doesn't make it a success by default and that's the case with Jonathan Demme's Philadelphia, a film whose earnestness gets in the way of its drama.

Philadelphia tells the story of Andrew Beckett (Tom Hanks), a smart lawyer at a prestigious law firm. In addition to being an excellent lawyer, Andrew happens to be gay and infected with AIDS, two facts he's hidden from his conservative colleagues.

When the firm (headed by Jason Robards) begins to get an inkling of the truth, they frame him for incompetence and fire him. Angered by the injustice done to him, Beckett seeks an attorney to argue a wrongful termination suit against the firm. After several lawyers turn him down, he settles for Joe Miller (Denzel Washington), an ambulance chaser who's just as homophobic as Beckett's ex-colleagues.

While Philadelphia boasts excellent performances (Hanks and Washington are equally good), the script seems determined to avoid even the slightest venture into gray areas. The movie spells out everything neatly and clearly.

Beckett's family stands solidly with him in his fight and the firm's defense gets as much serious consideration as the lone gunman theory got in JFK. They even feel compelled to toss in a shot of the firm's defense attorney (Mary Steenburgen) muttering how much she hates this case.

Anyone with a brain, a heart or both knows what the verdict should and probably will be. As a result, instead of creating a vivid drama concerning AIDS discrimination, Demme and screenwriter Ron Nyswaner fashion a film that won't change any minds. Some will cheer justice, others will cry propaganda and few in between will be swayed.

What Philadelphia does have going for it are the performances of Hanks and Washington. Hanks soars as the AIDS-stricken lawyer and Washington plays his role intelligently enough that his gradual change of heart doesn't seem sudden or artificial. In fact, you can't be positive he even has one.

Philadelphia isn't a horrendous film, just a tremendously disappointing one. Instead of being a thought-provoking landmark it ends up playing more like a two-hour episode of L.A. Law.