Nobody gives it to you, you have to take it 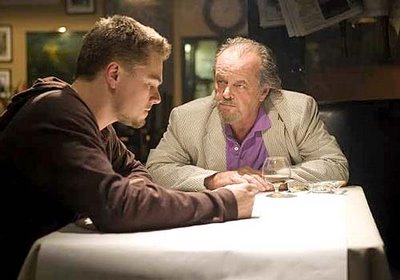 By Edward Copeland
In the case of The Departed, Martin Scorsese not only takes it, he runs with it all the way down the field and past the goal line. Admittedly, I've liked far more Scorsese pictures than I've disliked, including his recent somewhat maligned efforts such as The Aviator and Gangs of New York, but neither compares to The Departed which marks Scorsese's best film since 1993's The Age of Innocence. 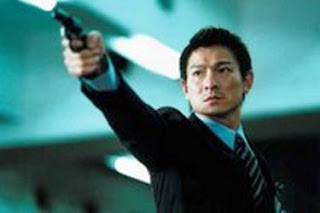 It would seem as if Scorsese has retreated to somewhat familiar turf by telling this story of Boston gangsters and the cops out to take them down, but Scorsese infuses the film with such kinetic energy and vitality, that the movie never feels as if it's a retread (unlike 1995's Casino). William Monahan adapted the screenplay from the great 2002 Hong Kong film Infernal Affairs about two undercover agents, one infiltrating the police for the gangster, the other infiltrating the gangster for the police. In the Americanized version, the mobsters are Irish with the police mole played by Leonardo DiCaprio, turning in his strongest performance for Scorsese yet, and the gangster plant played by Matt Damon, who uses his all-American good looks and blue eyes to hide the crook lying beneath. Of course, the greatest difference between Infernal Affairs and The Departed is the beefing up of the role of gangster kingpin, this time called Frank Costello and played with unmitigated glee by Jack Nicholson as a character loosely based on the real-life Irish mobster Whitey Bulger.

Announcing that Nicholson soars in a role such as Costello seems redundant. Yes, there is much scenery devoured, but Nicholson has earned that right long ago and it seems perfectly suited for Costello, with the necessary edge that arises from the long-overdue teaming of Nicholson with Scorsese. This may be the best ensemble Scorsese has ever assembled. In addition to DiCaprio, Damon and Nicholson, there are solid turns by Martin Sheen, Alec Baldwin, Anthony Anderson, Kevin Corrigan and Vera Farmiga as the police shrink who somehow gets herself involved with both moles, even though DiCaprio warns her that there is no one more full of shit than cops other than cops on TV, and Damon, who knows the answer to her question about what Freud said about the Irish: that they are the only group impervious to psychoanalysis. 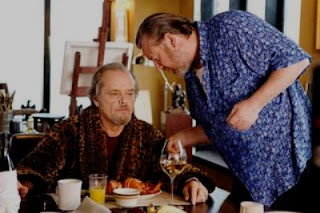 The British actor Ray Winstone delivers another great turn as Mr. French, Costello's right-hand man, who may well be the most quietly menacing character in a film exploding with quietly menacing characters. His interplay with Nicholson and DiCaprio grounds both actors to a certain extent. What's most amazing about the film is that even if you've seen Infernal Affairs, whose outline it follows fairly closely, some of the twists you should know are coming still pack a punch thanks to Scorsese's taut direction. The Departed at 2½ hours is much longer than the film it's remaking, but you never really feel the padding. It's not news that Scorsese is a great director, but it's been so long since you've seen him produce something where he obviously feels so confident, that a fan leaves the theater practically giddy with excitement for both him and the medium again.

Of all aspects of The Departed that seemed most revelatory to me, it has to be Mark Wahlberg's role as Dignam, one of DiCaprio's police supervisors. Wahlberg truly has grown over the years into a fine actor, starting in films that were better than he was (such as Boogie Nights and Three Kings) until he gave performances better than the films he was in (as in I ♥ Huckabees). With The Departed, Wahlberg finally plays a role at the same quality level as the film he's in. Wahlberg has never been better as the decidedly profane and fast-talking cop here.

Over the past few years, a new Scorsese picture always has produced as much nervousness as anticipation as each film seemed more like a platform to discuss his long-overdue Oscar than a great film itself. I still had that feeling going into The Departed, but it was soon swept away as Scorsese grabs the viewer by the lapel and never lets go, whether it's in a noisy gunbattle with echoes of Peckinpah, a tense scene of silence between parties on opposite ends of a phone call or a foot chase through Boston. Marty, it's great to have you back in the fine form for which we feared may have been lost but which The Departed confirms was merely in remission.

Comments:
Oh boy, I have to see this, and quick.

I completely agree with you, Edward. I might even vote that this is Scorsese's best film since "Goodfellas," but the chief point is that this is terrific, taut filmmaking that, unlike much of Scorsese's cinematic wizardry, conceals its craft.

And the acting is tremendous. You are right that Wahlberg is a revelation, but I will say, too, that it's the best I've seen DiCaprio (and that's coming from someone who loved "The Aviator").