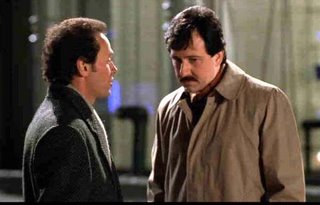 Some celebrity deaths take you by surprise and that is certainly the case with Bruno Kirby, who died Monday from leukemia. It seems as if Kirby has been around forever, popping up in various movies and TV shows (sometimes credited as Bruce Kirby Jr. or B. Kirby in his early days).

One of his first credits at the Internet Movie Database is the pilot episode of TV's M*A*S*H but he was also a semi-regular on Room 222 and appeared on other 1970s series such as Columbo, Kojak and Emergency! However, it's his film work that most people, including myself will recall.

From his appearance as one of the students in the supremely goofy and dated The Harrad Experiment in 1973 to his role as the young Clemenza opposite Robert De Niro's young Vito Corleone in The Godfather Part II. Still, Kirby didn't really hit his film stride until the 1980s, appearing in Albert Brooks' Modern Romance, This Is Spinal Tap and Birdy among others. He also worked three times in films with director Barry Levinson in Sleepers, Tin Men and Good Morning Vietnam. He teamed twice with Billy Crystal in When Harry Met Sally and City Slickers, the films that cemented his sardonic screen persona.

He wasn't just about comedy though — he also played the closeted coach in The Basketball Diaries and appeared in Donnie Brasco as well. For me, my favorite film role of Kirby's is as Marlon Brando's nephew in the great comedy The Freshman, so in a way you can say Kirby played opposite both Vito Corleones.

Still the strongest memories for me of Kirby may very well be his work in two television series. First, in the "Gas Man" episode of Homicide: Life on the Street, also directed by Levinson, where he played a man newly released from prison for causing an accidental poisoning death and determined to get revenge on Detective Frank Pembleton (Andre Braugher), the cop who put him behind bars, with the reluctant help of his friend (Richard Edson).

His first television work with Garry Shandling came in the last two seasons of "It's Garry Shandling's Show." where he played Garry's manager Brad Brillnick, but the more lasting and hysterical collaboration with Shandling came with Kirby frequently playing himself on The Larry Sanders Show as a guest who constantly gets bumped when the show goes long.

Comments:
I was a bit bummed this news. I can't claim to ever have been a huge fan (the Crystal flix did nothing for me), but I'll always remember him for MODERN ROMANCE if nothing else.

Mostly I was taken aback because I'd just watched DONNIE BRASCO two nights ago, so as an actor he was fresh in my mind.

And I had watched Tin Men last week laughing at the truthful dialogue in the diner as DeVito, Jackie Gayle and company tried to remember when Mouse had for breakfast the day before.

Great post ... He was one of my all-time favorites (and we share on the two best-as young Clemenza and on Homicide Life of the Streets) ... He was a throwback to the old Hollywood - the great character actor ...He will be missed