I'm almost halfway finished/How do you like it so far? 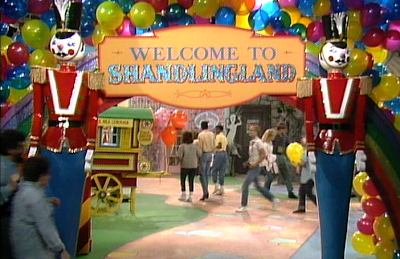 By Edward Copeland
The 17 episodes of the second season of "It's Garry Shandling's Show." began on Oct. 25, 1987 and ran through March 18, 1988 on Showtime. As it turns out, 1988 proved to be a big year for the show. In March, Fox began airing reruns of the show from the beginning, eventually catching up with Showtime's schedule. More importantly, not just for this show but for all of cable, the TV Academy finally decided to allow cable programs to compete for Emmys and "It's Garry Shandling's Show." earned four of the first nominations ever given to a cable series. I'll mention them as the episodes involved come along. It would be the only nominations the show ever received. They didn't get any for the third season, which I'll also cover here, or the disastrous fourth, which is part of the final post. If you missed reading about season one, click here.

The second season premieres with "Who's Poppa?" and finds Jackie Schumaker with child — but Pete,

computing her menstrual cycle and the days they had sex, suspects he might not be the father. The conception coincides with the time Jackie went to her high school reunion and Pete suspects an old flame. Garry tells Nancy about Pete's fears and she also remembers that the reunion coincided with Jackie's fertile period, making Garry ask if he's the only person unaware of Jackie's cycle. He decides to fly to Chicago to confront Jackie's high school friend and we learn that Garry has his own plane — complete with stewardess. The show also launches the Name the Schumaker Baby Contest. 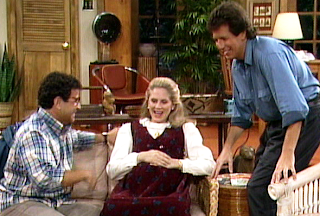 The second episode belongs in the pantheon of the top two or three episodes ever of "It's Garry Shandling's Show." This episode received two of those four Emmy nominations: outstanding writing in a comedy series for Shandling and Alan Zweibel and outstanding direction in a comedy series for Alan Rafkin. As with the opening monologues of many episodes, Garry tells the audience what the night's show is going to be about, though it seldom turns out that way. In "No Baby, No Show," this has created quite a dilemma for Garry as he has invited Pete and Jackie Schumaker over so she can have the baby during the broadcast but so far there have been no signs of labor and the three just sit around waiting. Eventually, Leonard drops by and joins the waiting party. Garry begins to express his frustration with the Schumakers for not delivering on time and ruining his show when 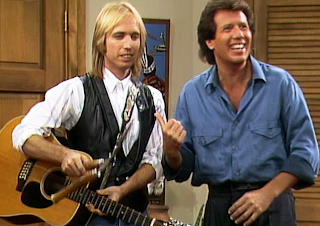 there is a knock on the door. We meet another resident of Happy Pilgrim Estates we weren't aware lived there — rock star Tom Petty (who for some reason happens to be carrying his guitar). Petty wanted to return Garry's hedge clippers to him. Anxious for anything to fill air time, Garry talks Petty into performing a song for them, which he does, selecting what really would be the only appropriate choice: "The Waiting." Now, don't stop to question why there's a standup microphone at the ready near Garry's bumper pool table or why they were prepared with special lighting for Petty — just go with the flow. When Petty finishes, he takes his place on the couch, with everyone sliding one spot to the right, and Garry places a table in front of his chair and brings out a copy of Petty's latest album to promote. Yes, the living room has been transformed into a talk show. On the commentary track for this episode, Shandling said he got this idea after hosting The Tonight Show for a week. This episode particularly 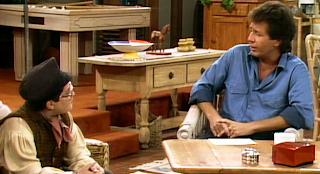 cracks me up because in my high school years, some of my friends and I would occasionally sit on various porches that had chairs and pretend that we were doing talk shows — and that was before this episode and long before Kramer re-created The Merv Griffin Show set in his apartment on Seinfeld. On a brief sidenote, on the DVD, Shandling also mentions that after the show got to be so overwhelming, he decided he had to give up his gig as one of the permanent guest hosts on The Tonight Show. When he called Johnny Carson and told him that he had to quit for the other show, at first Carson feared Shandling was pulling a Joan Rivers and starting his own talk show against him until he explained that it was the sitcom and it wouldn't air opposite The Tonight Show. Back to the "No Baby, No Show" episode: Nancy comes rushing in because she mistook some of Tom Petty's singing as Jackie going into labor. She takes the first seat 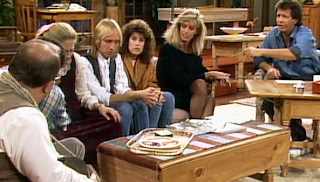 on the couch and everyone slides down again, which keeps getting funnier since they have to keep lifting the very pregnant Jackie to accomplish this. After briefly asking Nancy what's she's been up to, a strangely clothed Grant wanders in. It seems he's debuting that night as Tevye in his school's production of Fiddler on the Roof. Grant takes the guest No. 1 spot and discusses the musical with Garry, who tries to name Tevye's daughters only to be corrected by Tom Petty who names the five. "Tzeitel, Hotel, Chava, Shprintze and Bielke," the rocker lists. Grant then performs a brief excerpt of "If I Were a Rich Man" before leaving to head to the school. Periodically, Garry glances over his left shoulder and makes references to "Doc," as if Carson's bandleader Doc Severinsen is off camera somewhere. So far, though the living room and episode have been transformed into a talk show, all the guests have logical reasons to be there, even Petty, since they 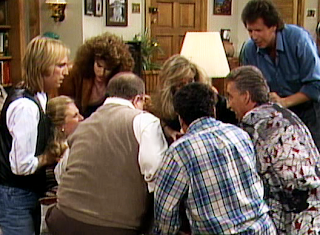 say he lives in Happy Pilgrim Estates, but all pretense disappears with the next guest who walks in the door to take her place on the couch — Susan Anton. Anton doesn't get to say much because Jackie finally goes into labor. As Jackie is moved to the 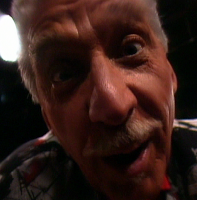 floor, surrounded by everyone in the living room to help her, Garry calls for Doc to help as well and, sure enough, Severinsen crosses the living room carrying his trumpet. After some pushing on Jackie's part, the camera assumes the baby's point-of-view and the first face Baby Boy Schumaker sees (remember, there's a contest to give the baby a name, so he won't have one for most of the season) is Doc Severinsen. It's one of the very best episodes, and it shows, as Shandling attests to on the DVD, how funny Tom Petty can be, as he will make more appearances before the series' end, and on The Larry Sanders Show as well.

The final episode of the second season is well known as it marked Gilda Radner's return to television for the first time in several years following her diagnosis with cancer. What isn't remembered as well is that the show's title was "Mr. Smith Goes to Nam" and concerned Leonard's flashbacks to his war experiences, when he meets 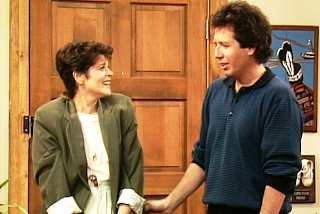 Gilda's nurse Blake (comic Blake Clark again), who was a member of his unit in Vietnam that got captured, and who spent nine months in a POW camp while Leonard escaped. The plot really was extraneous, though — Radner's return was the highlight. Alan Zweibel was her writing partner when both worked on Saturday Night Live, and while she was going through treatments, he and Shandling sent her tapes of the show. She said they helped her get through the treatments. When she went into remission, she decided she wanted to return to television and thought of "It's Garry Shandling's Show." As she told Zweibel, referring to the cancer, "My comedy is my only weapon against this fucker." The audience's applause at her appearance — which was a surprise since her visit wasn't announced ahead of time — really inspired her to go back to work. She developed with Zweibel and Shandling and was in talks with HBO for a series where she would be the star of a variety show, but would also show her home life. Unfortunately, the cancer returned before the show could get off the ground and she died in May 1989. Her appearance in this episode did earn her an Emmy nomination as guest actress in a comedy, the series' fourth Emmy nomination. 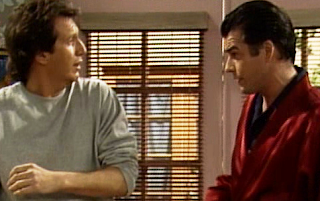 The third season of the show had many funny things in it but even the episode that I recalled most fondly doesn't play as well now, making it understandable why Zweibel and Shandling believed the show had fallen into a rut. However, their solution — suddenly adding a major new character in the fourth season, Garry's girlfriend-eventually-wife — actually made the situation worse. The best thing to come in the third season was the addition of Ian Buchanan as Nancy's odd Scottish boyfriend Ian, a role he was playing during the same time that he was a daytime heartthrob as Duke Lavery on the soap opera General Hospital. Buchanan would later appear on several soaps, a hysterical first season episode of Larry Sanders as a friend of Larry's filling in for Artie (Rip Torn) and trying to steal his job as producer, and play Dick Tremayne in the second season of Twin Peaks.

TO READ ABOUT SEASON FOUR AND WHO WORKED ON THE SHOW, CLICK HERE