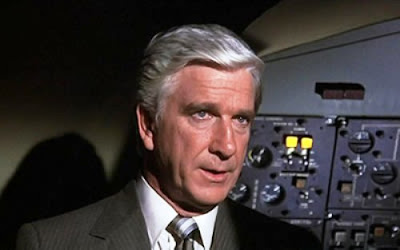 It will be hard to believe for many who read this appreciation of the career of Leslie Nielsen that for the better part of it, the actor was known as someone who tended to play the most dead serious of parts. "Surely, you can't be serious," they will inevitably say to me, but I am serious, that was the case of Nielsen's career until 1980 and a certain film called Airplane! turned him almost exclusively into a comic actor. And don't call me Shirley. Nielsen died of pneumonia Sunday afternoon at the age of 84.

Nielsen's early work consisted mostly of television and the many live theatrical programs. He only appeared on Broadway once in a play called Seagulls Over Sorrento that ran for a total of 12 performances in 1952. He also did guest shots on various series.

He made his film debut in 1956's Ransom as a newspaper reporter who convinces the father of a kidnapped son (Glenn Ford) not to pay the ransom but to try to rescue the boy instead. That same year saw him on the big screen three more times, the most famous being Shakespeare's The Tempest transferred to outer space in Forbidden Planet. He also appeared in Michael Curtiz's musical romance The Vagabond King and the musical comedy The Opposite Sex which featured June Allyson, Joan Collins and Ann Miller, among others.

The following year, Nielsen stayed in the musical romance genre as the title love interest opposite Debbie Reynolds in Tammy and the Bachelor. In 1958, he worked with Ford again (and Shirley MacLaine) in his first Western, The Sheepman, also known as Stranger With a Gun. Following that came a lot more television work, including two appearances on Alfred Hitchcock Presents and as the star of his own series, The New Breed from 1961-62.

In 1965, he was featured in the big screen biopic of Jean Harlow called Harlow starring Carroll Baker. The same year, he had a regular role on TV's Peyton Place. The next year, he got to play Custer in the feature film The Plainsman, the same year he appeared with Guy Stockwell as Beau Geste.

While he wasn't the main clown on deck, he did co-star with Don Knotts in 1967's The Reluctant Astronaut. The same year, he appeared with Charlton Heston in Counterpoint, about a famous orchestra conductor kidnapped during World War II and forced to put on concerts for Nazi generals.

He got his feet wet in comedy again in 1969's How to Commit Marriage, though stars Bob Hope and Jackie Gleason were the ones getting the main laughs. In 1971, he starred in the thriller The Resurrection of Zachary Wheeler about a reporter investigating how a senator is brought back to life after a fatal car wreck.

In 1972, before he ever starred in the greatest spoof of disaster films ever, he played the captain in one of the best, The Poseidon Adventure. The next year, he played straight man on one of TV's M*A*S*H's funniest episodes about a colonel eager to get back to the fighting but who ends up being delayed thanks to Hawkeye and Trapper's shenanigans.

In 1977, he starred in a horror film that I actually saw in the theater called Day of the Animals where he played a bad guy, so bad that you didn't mind when he got mauled by a bear. The same year, he had an uncredited part that put him together with David and Jerry Zucker and Jim Abrahams for the first time in Kentucky Fried Movie.

In 1980, he did appear in another film, the slasher film Prom Night, but it was Airplane! that changed his career trajectory.

First, by giving him the short-lived TV series Police Squad! where he created Lt. Frank Drebin and earned an Emmy nomination, a part he'd later repeat in the three Naked Gun movies.

From then on out, he pretty much was spoof master du jour, though none of the other films had the same magic touch that the ZAZ efforts did. The most notable probably was Mel Brooks' attempt to recapture his old magic with Dracula: Dead and Loving It.

Still, for the last 30 years, Nielsen mainly lived to make us all laugh, on screen and off. I never did hear when he started carrying that fabled whoopee cushion around with him at all times.

Until we meet again, Leslie. I don't know where we'll be then, but it won't smell too good, that's for sure.

Comments:
Nielsen's double-takes were priceless on that "MASH" episode.

"The milk you made such a fuss about."

Definitely in my 10 best for the series.

RIP Leslie. His comedic genius will certainly be missed, the guy always get me laughing hard! Everyone remembers him in the Naked Gun movies, which were great. I also remember him for his small role in Surf Ninjas, one of my favorite childhood movies.

He probably got to Heaven, saw God, and said "I just want you to know, good luck, we're all counting on you"