Thank you for being my friends 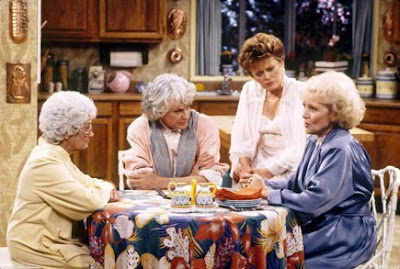 By Edward Copeland
The Golden Girls is a classic sitcom (seven seasons, 180 episodes) that everyone seems to enjoy, yet few want to admit it. Created by Susan Harris, who also created one of my all-time favorite sitcoms, Soap, it's one of the rare series where each member of the cast was rewarded with an Emmy during the show's run, which began 25 years ago today.

We've lost a member of the original of the original foursome each year for the past three years: Estelle Getty in 2008, Beatrice Arthur in 2009 and Rue McClanahan earlier this year. (Just Saturday, we also lost Harold Gould, who had a recurring role as Rose's boyfriend Miles.) Meanwhile, the sole survivor, Betty White, has become an unexplained phenomenon and busier than ever at the age of 88.

As a comedy, the show was fairly predictable: You could almost guess the laugh lines, but it did have a couple of moments that always stuck with me. One time, when Rose was hiding a dog that always brought back hidden objects she said he could find anything to which Sophia responded, "Quick! Find us a viable Democratic presidential candidate."

The other one means more to me all the time. When Dorothy faced a mysterious illness and got no help from doctors who either blew her off, told her she was getting old or should see a psychiatrist, she finally found a doctor who diagnosed her with chronic fatigue syndrome. Later, she ran into one of the other doctors who was particularly dismissive of her in a restaurant and gave him a dressing down that made me applaud. Of course, I was in a hospital at the time.

It was my extended time in hospitals when The Golden Girls really came to mean a lot to me. One hospital had lousy TV choices (its only cable news channel was Fox, which to me would threaten its religiously-affiliated nonprofit status. Have no fear. I reported them. :-) ) so the frequent reruns of The Golden Girls were a lifeline to me. I'd see the same episodes multiple times, but it didn't matter. The girls gave me some comfort through a particularly hard time. In fact, I miss their reruns now since Lifetime doesn't air the show anymore.