Alcohol is banned and business has never been better 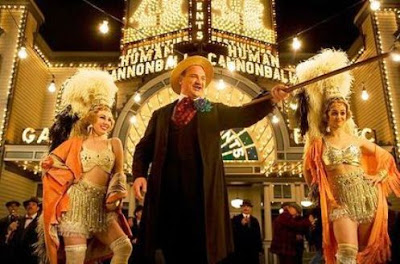 By Edward Copeland
It's been quite some time since a new HBO series has attracted such pre-air buzz as Boardwalk Empire (Sure, many of us, myself included, salivated for David Simon's Treme, but it wasn't exciting the masses like this). Then again, most new series on any channel don't come with Boardwalk Empire's pedigree: created and executive produced by Terence Winter, an Emmy-winning writer and producer of The Sopranos, executive producers Tim Van Patten, a frequent writer and director on The Sopranos, and Mark Wahlberg and another executive producer you might have heard of before. He's also directing the first episode: Martin Scorsese.

One thing can be declared with certainty about Boardwalk Empire: Once it airs (Sunday night at 9 p.m. Eastern/Pacific, 8 p.m. Central), Mad Men will lose the title as the best-looking show on television. The pilot 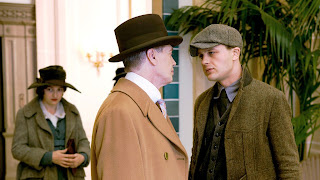 alone is said to have cost somewhere between $20 million and $50 million and you can practically see every dollar in the costumes and sets on the screen: It's truly a gorgeous depiction of Atlantic City, circa 1920. The period costuming and sets truly are remarkable for a weekly series, so much so that you may want to watch scenes and episodes multiple times because you'll get lost in the imagery and miss important pieces of dialogue and plot. For the pilot, the production design credit belongs to Bob Shaw (who worked on both Mad Men and The Sopranos) with Doug Huszti (Solitary Man) on art direction and Debra Schutt (Oscar nominee for Revolutionary Road) on set decoration. The pilot's gorgeous costume design comes courtesy of John A. Dunn (Casino, The Notorious Bettie Page). Making all their work look so marvelous in the premiere is the magnificent work of cinematograher Stuart Dryburgh (John Sayles' Lone Star, Bridget Jones's Diary, Oscar nominee for The Piano.

Boardwalk Empire also has a great use of period music, very few of which are familiar songs today. I've seen the first six episodes so far and it also happens to be a damn good start for a series, though part of me worries about how long a series this expensive can last since the plug has been pulled prematurely on other great period-set series such as Deadwood and Rome. 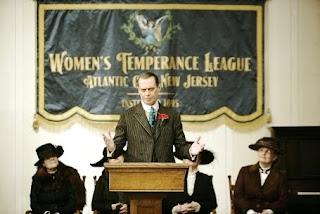 In a way, what's so unusual (and great) about Boardwalk Empire is choosing Steve Buscemi to play its lead character Enoch "Nucky" Thompson, the Atlantic County treasurer based in Atlantic City (he lives and works out of one of his hotels) with his finger in everyone's pie and one of the most important figures in the area's Republican Party politics (and this certainly isn't Sarah Palin's GOP, though it was the first year that would allow Mama Grizzlies and normal, rational women to vote). Buscemi has played leads before, but really he's never been given the chance to play a figure of this much authority and he's superb. The series begins as Prohibition starts in January 1920 and as Thompson (based on a real-life figure of the time) meets with other elected officials, they can't wait for the windfall they will reap. The country may be legally dry, but Thompson doesn't expect this to inhibit the free-flowing booze of Atlantic City one bit: It will just allow them to charge more. They also have little worry from the local authorities since the sheriff is his brother Eli (Shea Whigham). Of course, the well-connected official that Nucky is, he also protects his own image, speaking to a meeting of the women's temperance league about that old demon rum and alluding to the strange bedfellows that allowed Prohibition historically in the first place, such as that women's suffrage movement, which didn't officially grant them voting rights until August. Nucky's a slick and charming individual, with a taste for the lurid side of life, but he's still drawn back to the strict Catholic upbringing of his strong Irish roots, of which he contains a love-hate relationship. He's also prone to speak in cliches, though given that we're in 1920, were they all cliches yet?

One interesting side note: creator-writer-executive producer Winter and executive producer Van Patten, who directs several of the first six episodes of Boardwalk Empire, co-wrote the classic Sopranos episode "Pine Barrens," which happened to have been directed by Buscemi. 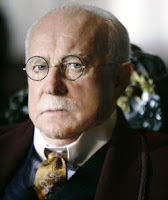 Michael Pitt plays Jimmy Darmody, Nucky's driver and protege, who has just returned from his service in the Great War to his common-law wife and young son, but he's not the young man who left as warfare has changed him. He's part of a large and talented ensemble that supports Buscemi including the talented Scottish actress Kelly Macdonald (No Country for Old Men, Gosford Park, Trainspotting) as a pregnant and abused Irish wife whose suffering gains Nucky's notice, an unrecognizable Dabney Coleman as Nucky's aging political mentor, Anthony Laciura as Nucky's hysterical manservant Eddie, Gretchen Mol as Jimmy's showgirl mom, Michael Stuhlbarg (so superb last year in the Coens' A Serious Man) as Arnold Rothstein and Michael K. Williams, the memorable Omar from HBO's The Wire, as Chalky White, the leader of the city black community who becomes involved in Nucky's bootlegging business when his previous employee Mickey Doyle (Paul Sparks) gains the feds' notice. 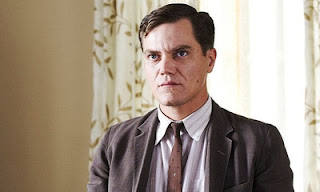 Of course, while Nucky may control the local authorities, he doesn't control the feds and he faces a formidable adversary in Agent Nelson Van Alden of Internal Revenue. The always interesting Michael Shannon plays the ultra-pious Catholic Van Alden, who isn't above getting rough when needed when it comes to cracking cases and stopping the spread of illegal alcohol. The Thompson/Van Alden dichotomy should prove interesting as the series develops and with the flip sides of the Catholic coin, it does have Scorsese written all over it, even though Winter actually gets credit as the creator and Scorsese's involvement is as an executive producer and director of the first episode. Shannon, who has given crackling big screen performances in Revolutionary Road, The Missing Person and The Runaways, adds even more acting firepower to a cast that's already well armed.

While Boardwalk Empire might seem as if it's developing into a period gangster show and that element is certainly there, it's much more well-rounded than that and Scorsese gets the series off to a great launch and has said he would like to direct additional episodes. I've only seen the first six episodes, but it's off to an impressive start. If you record the premiere, remember to set long. Most episodes run an hour, but the premiere was about 70 minutes long and I was watching a copy that didn't have credits, so what airs will be longer. Boardwalk Empire premieres the first episode of its 12-episode first season at 9 p.m. Eastern/Pacific, 8 p.m. Central Sunday night. Beginning Monday, I will run morning-after recaps of each episode.

Comments:
I will be here first thing Monday to read the recap. I can't wait, either, for this show! However, I'm so far behind on TV right now (I still have a DVR's worth of Season 4 Mad Men and Treme to watch!) that I hope I don't just let this sit on the DVR forever.

Glad to hear Michael Shannon is involved. He's one of my very favorite actors working today.

Just curious: I noticed that Eastbound and Down Season 2 is premiering next weekend...are you a fan of that show?

Actually, I haven't seen any of Eastbound and Down. It's tricky for me to see much HBO stuff now because we only have it in the living room with the DVR and don't have it in my bedroom and under the latest doctor's orders, I'm limited in the amount of time I can spend sitting up and it's impossible for me to be hoisted out of bed in the evening anyway.

I've watched every episode of Empire and I want to like it, I really do. It's a beautiful period piece with great actors and great care taken to make it as real as possible.

But after the first half dozen episodes or so I find something missing. There's no tension, no character interaction that keeps me thinking about it during the week. With Rome or the Sopranos I was actively engaged, trying to guess what they would do next. Here, not so much.

The shooting of Nucky's brother was the first time I really wanted to see how someone would react. Hopefully it's the start of something better...