Sometimes the movie isn't what you want to talk about 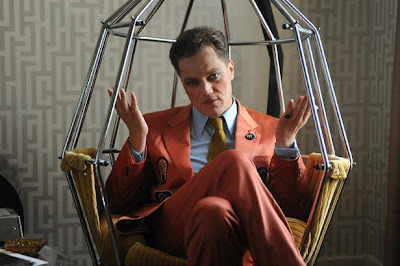 By Edward Copeland
The biggest plus to deciding what movies you want to write about, as opposed to the days when I worked at a newspaper and had no choice in what I saw and wrote about, is I also have great latitude in how I choose to write about them. This comes in handy with a movie such as The Runaways, which I might bypass altogether after seeing it if it weren't for Michael Shannon's performance. His sudden appearance as a welcome name to see in credits in just the span of a couple of years justifies me "reviewing" The Runaways, when it's really just my excuse to wax rhapsodic about Shannon's rapid rise as one of my favorite actors.

The Runaways, based on the memoir by Cherie Currie (played here by Dakota Fanning) tells the story of the brief run in the mid-1970s of an all-girl rock band whose impetus was a teen Joan Jett (Kristen Stewart). Given the period and the subject, you'd think the movie would have real possibilities, but it never seems to get its engine going, with one exception.

That exception is Shannon, playing the oddball rock figure Kim Fowley who tries to shape the girls less into a band than into a publicity stunt. It's as if he wants to create a jailbait version of The Monkees, only without the TV show and disregarding the fact that Jett and the other members except for Currie have real musical talent.

Until this film, Fowley was unfamiliar to me, but looking up his bio (and his own Web site), it seems as if a much more compelling film could have been made about Fowley, who produced or co-wrote songs for acts such as KISS, Blue Oyster Cult, Helen Reddy and many others, including some notable one-hit wonders. He also had a childhood bout of polio that makes him dependent on a cane to this date. More importantly, if that film had been made and the biopic were built around Shannon's wild and entertaining performance, that film might have been something worthwhile as opposed to this rather tepid outing by writer-director Floria Sigismondi.

Every scene in which Shannon appears as Fowley in The Runaways brings the movie to vivid, vibrant life. When he's off-screen, it's as if the film has experienced a serious drop in blood pressure. Shannon's work here carries that much importance to the energy of The Runaways, but in films of all range of quality and roles of all sizes, he's fast providing a welcome boost of adrenaline.

The 35-year-old actor first began appearing in things, according to IMDb, around 1992 with his distinctive face that for years made him one of those performers who always looked familiar, but whom you couldn't name. His early work included episodic television appearances as well as notable movies such as Groundhog Day and Jesus' Son, though I don't recall him in either. He also had the misfortune of appearing in clunkers suck as Pearl Harbor, Vanilla Sky and Bad Boys II.

Then came 2007 and Shannon seemed to explode, first in a small but attention-grabbing role in Sidney Lumet's Before the Devil Knows You're Dead. The following year, two magnetic scenes in the film adaptation of Richard Yates' Revolutionary Road earned him an Oscar nomination for supporting actor.

In 2009, he soared as the lead in the quirk and underseen detective story The Missing Person and this year has brought The Runaways and, still to come, a major role in the Martin Scorsese-produced series for HBO Boardwalk Empire starring Steve Buscemi. (I'm being nice and omitting his presence in Werner Herzog's awful The Bad Lieutenant: Port of Call — New Orleans and I haven't seen Jonah Hex.)

Did I mention Michael Shannon will turn a mere 36 in August? He has a long career ahead of him and while he's been at it a while, when he can make an otherwise dull film such as The Runaways watchable — hell, just about anything watchable — Shannon must have found his lucky star. Then again, maybe it's us, the viewer, who are the ones who found that lucky star.

I agree that Fowley tends to steal his scenes in The Runaways (and he certainly dominated Revolutionary Road), but there's something irksome about your analysis here. Shannon is practically the only guy in the whole movie. Isn't it bad to say he's the only thing to bring the film to "vivid, vibrant life"? I was also intrigued by the brief presence of Tatum O'Neal as Cherie's mother and Robert Romanus (the guitar teacher) who I last saw in Fast Times at Ridgemont High. Overall, I blame the weak writing for the underwhelming effect of the film. The story arc (if that is the word) is too predictable and underbaked to have much of an impact, regardless of all the gestures toward rock rebellion.

I think you are basically saying the same thing I am just in more detail. My whole point basically is that with Shannon's presence, I probably wouldn't have bothered to write about the film at all since the rest of it was so mediocre or worse. Truth be told, so were his scenes, his energy just overcame their weaknesses. I also have to admit that I didn't even notice that was Tatum O'Neal, though a lot of that I think has to do with the film being so underwhelming that when Shannon wasn't there to enliven it, my mind would start to wander. Again, as I said in my lede, this would have been one of those films I would have felt no compulsion to write about at all except that I did what to write about Shannon's performance. I don't think he saves the film but he's the only reason I'm glad I saw it. It's like a piece I wrote a long time ago about when bad movies happen to good performances. Should I toss the baby out with the bathwater, so to speak?

I thought Shannon had the best character in The Runaways, but not necessarily the best performance. Not a knock on him. I just think he was given the great lines and the great moments. I might get this line wrong, because I saw this in the theater several months ago, but one of my favorite moments in film this year is when they're being chased by the cops and Shannon's character yells: "Scatter!" Or something like that. (Side point: I really like Stewart in that film, even if her character is a rock cliche for the most part. Now back to Shannon ...)

On the flip side of The Runaways is his turn in Revolutionary Road, which is a great performance but an awful part. I mean, a great Oscar-type part. But it's tonally inconsistent with the rest of the film and leads to its most awkward moments. I love that film, but there are several moments with Shannon -- pretty much the whole second meeting -- I'd love to remove, even if many audiences enjoyed his colorfulness.

Back to The Runaways: If you have the DVD, watch him again, add some face paint and lip-licks... it's Heath Ledger's Joker. Seriously.

I thought Stewart did fairly well, she just had the misfortune of having so many scenes opposite Fanning who was trying her damnedest to prove that she's not a little girl any more. As for Shannon's part in Revolutionary Road, it makes more sense if you've read the novel. His character only has one more scene that isn't in the movie, but it's much clearer how it fits in to the art of the entire story.