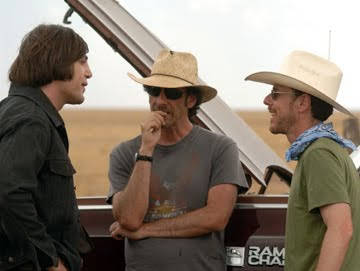 By Edward Copeland
For more than a decade now, I've lived in a critical wilderness when it comes to the Coen brothers. I was a huge fan of the siblings from the moment I saw Blood Simple back in 1985, through the great fun of Raising Arizona and the exquisite Miller's Crossing. I liked Barton Fink a lot, though something of their style was starting to strike me as repetitive.

When Fargo came and seemingly the entire critical world ravished it with hosannas, I felt as if I stood alone thinking the movie was overrated and the Coens were stuck in a rut, a feeling that only grew over the course of their next films, so much so that I skipped offerings such as the ill-advised remake of The Ladykillers and Intolerable Cruelty. When No Country for Old Men started garnering raves, I was skeptical as I had been post-Hudsucker Proxy, partly as self-defense so as not to be disappointed. Now I've seen No Country for Old Men and no one is more delighted than I am to say that Joel, Ethan and I have met up again on the same path.

This isn't to say that some of the praise for No Country for Old Men isn't overselling the film's worth, but I think it's understandable since it plays like such a radical departure from the usual Coen outing. As Tommy Lee Jones' sheriff says at one point, "it's hard to take measure of something when you don't understand." Still, this film adaptation of Cormac McCarthy's novel isn't really hard to grasp, it's just removed from most of the brothers' recent output in its coldness, straight-forward nature and relative lack of snark.

In a way, the Coen brothers film that No Country most closely resembles is their very first effort, Blood Simple, with its Western noir feel and Texas setting. Unlike Simple's great showiness, No Country resists all impulses to call attention to itself. It's as if the Coens, tired of two decades as the high school class clowns of American filmmaking, have finally matured to middle age.

The other Coen film that No Country parallels, albeit slightly, is Fargo since it really has no lead but instead three characters whose paths intersect at times. In addition to Jones' sheriff, who seems like a more reticent version of the character he played in his underrated directing debut, The Three Burials of Melquiades Estrada, there is Josh Brolin's trailer park denizen who stumbles upon the scene of a drug deal gone bad and makes off with a briefcase full of cash.

The third, and most vivid, member of this trio is Anton Chigurh (Javier Bardem), a stoic killing machine with pasty skin and a Prince Valiant haircut, out to retrieve the money as well as slaughter anyone whose death meets his peculiar fancy.

What's most remarkable about the film to me is its pacing, which seems very deliberate yet delivers much momentum without ever feeling rushed. I also liked how it's a period piece, but one so subtle that unless you pay close attention, you might not realize it is set in 1980.

In fact, what No Country bubbles over with more than anything else is subtlety, not something I've come to expect from the Coens. The themes of what a tough country America can be and the futility of chasing things that have fallen far from your reach are there, but delivered with a velvet touch instead of a sledgehammer. The other thing that impressed me most is that really none of the characters are particularly dumb.

Sure, they make mistakes, sometime fatal ones, but the movie never mocks them and some of their ingenuity seems out of a script from MacGyver. Also, while this is a violent film, much of the bloodshed is only seen either in the aftermath or not at all.

The performances are great across the board, from Jones and Brolin to Kelly Macdonald as Brolin's wife and Garret Dillahunt (late of HBO's Deadwood and John from Cincinnati) as Jones' deputy as well as brief appearances from Woody Harrelson and Barry Corbin.

Still, No Country for Old Men belongs to Bardem, who has created a monster for the ages.

One criticism I heard from people leaving the theater when I left was frustration with the somewhat vague ending that denies the audience clear-cut payoffs. That didn't bother me, because it's all there if you pay attention and the Coens aren't rubbing anything in the audience's face as they've done in the past.

In a way, it somewhat resembles the reaction to the finale of The Sopranos, emphasizing what many of that HBO series' fans hit upon: the recurrence of the idea that some things you never see coming. I have to admit I didn't see this good a film coming from the Coens again, but I'm most grateful that it did.

Comments:
On your subtle theme, I loved the little linguistic touches with the characters. Chigurh has a strange Mexican accent that seems to fade in and out, and he had a few lines I wish I could have had subtitles on. I swear when he asks for a screwdriver in the desert, he calls it a "screwjee."

good review, you convinced me to go see the movie. i would have anyway, but now i'm really excited going. nice blog by the way.. would you like to make a link exchange? i also write about movies. my blog is movieguerilla.com

One of my favourite films, Coen's or otherwise, and I pretty much admire all of their work.

For the record, but of no particular interest to anyone but me, here are a few of my humble thoughts on a fragment of "No Country for Old Men" wherein the Moss character returns with a jug of water for the dying Mexican.

There now! See? I called him the "dying Mexican" just like everyone else does. And that's because it's made amply clear he won't be around for long.

Contrary to popular opinion, however, I think Moss's reason for returning has nothing to do with quenching the Mexican's thirst. No, I rather suspect he returns to abscond with the neat stash of drugs, all wrapped up and ready to go.

It's the natural course of action all things considered: He took the money. He took the guns. Lying in bed, he realizes he should/could have taken the drugs too and it jolts him upright. So off he goes.

Moss is a Vietnam Vet. I'd wager he can ascertain how long a large, blood-gushing gut wound like that takes to kill a man. The water jug serves merely as balm for his conscience, it's a guilt dampener, a good excuse and, perhaps, an alibi, should one be needed at some point.

I prefer to view Moss in this light for it puts a different complexion on what follows.

Hence, Moss is not a good Samaritan. He is unmoved by human suffering. Had he truly intended to give the man water he'd have taken the jug to the truck with him, whilst checking around, and not have left it 20 ft. away.

In addition, Moss is a thorough and a careful man, one who endeavours to always finish what he starts. Thus, much like his nemesis, Moss is not a good man.

I love your reviews.

Thanks so much,
babette