“There’s no reason to shoot at me! I’m a dentist!” 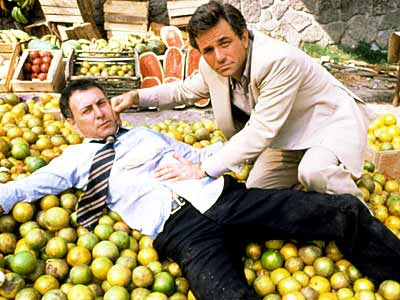 By Ivan G. Shreve, Jr.
“Comedy is subjective,” goes the old saw — and what this basically says in a nutshell that something humorous enough to make soda pop come out of my nose might very well leave you stone-faced in the bargain. Take me and my sister Kat … I consider myself a connoisseur of film comedy, enjoying the antics of Chaplin, Keaton, Lloyd, Laurel & Hardy, the Marx Brothers, Fields and practically everyone else from the golden age of mirthmaking. Kat will have none of that, preferring the modern-day antics of comic actors like Will Ferrell or Steve Carell — both of whom leave me completely pokerfaced.

On this date 30 years ago, a feature film was released by Warner Bros. that provides the exception to my and my sibling’s “rules of comedy” — in fact, to this day I’ve yet to come across any individual who has something bad to say about it. That movie is The In-Laws (1979), an early example of the “buddy” film starring Alan Arkin as a mild-mannered Manhattan dentist who, upon meeting prospective in-law Peter Falk (who claims to work for the CIA), finds his world completely turned topsy-turvy when he’s helplessly enmeshed in Falk’s outlandish scheme to rob the U.S. Treasury while in the service of a Latin American dictator (Richard Libertini) with a Senor Wences fetish.

Dr. Sheldon Kornpett (Arkin) invites the parents (Falk, Arlene Golonka) of his soon-to-be son-in-law (Michael Lembeck) over for an introductory party days before the wedding, and when “businessman” Vince Ricardo regales his audience with peculiar tales of his days in Guatemala (“They have tsetse flies down there the size of eagles,” he claims), Sheldon is suspicious that Vince may be a few sandwiches shy of a picnic (he tells his wife played by Nancy Dussault that he would have read about the giant flies in National Geographic). When Vince stops by Sheldon’s practice and asks him for a favor (removing the contents from a safe in a nearby office) the dentist good-naturedly agrees to help him out…and finds himself on the receiving end of assassin’s bullets and a series of incredible adventures that lead to a hysterical climax in which he and Vince face a dictator’s firing squad (“We have no blindfolds, Senor — we are a poor country!”).

The first element in The In-Laws that is ultimately responsible for its incredible comedy payoff is the falling-down funny script by writer Andrew Bergman (one of several scribes who worked on the classic screenplay of Blazing Saddles), who was asked by the Warners studio to create a film in the same vein as an earlier Alan Arkin film (one in which he co-starred with James Caan as a pair of unconventional cops), Freebie and the Bean (1974). It soon became obvious that Bergman’s concept for the new film didn’t completely jibe with Warners’ original Freebie follow-up idea but Bergman delivered such a masterpiece of understated comedy that it really made no difference. The In-Laws’ script is that rare piece of material that triumphs over the other flaws in the film (the lackluster direction by Arthur Hiller, for starters), frequently coming across as improvised and off-the-cuff.

Part of that off-the-cuff improvisation can be attributed to the participation of Alan Arkin (one of the original members of Chicago’s Second City troupe), one of the cinema’s finest character actors and an individual with an amazing performing range that includes comedic roles (The Russians are Coming, the Russians are Coming, Little Murders) and dramatic turns (Wait Until Dark, The Heart is a Lonely Hunter) as well. But his co-star Falk is no slouch in the funny bone department, either; though known to audiences primarily as the eccentric TV detective Columbo, Peter also demonstrated a fine pair of comedic chops in films such as Murder by Death and The Cheap Detective. Watching both these actors play off one another is a thing of beauty, with Arkin’s sardonic Sheldon the perfect foil to the slightly egomaniacal Vince (“I’m such a great driver…it’s incomprehensible that they took my license away”).

Everyone who’s watched The In-Laws at least one time has a favorite bit or scene: some of the highlights include Falk’s instructions to Arkin on how to avoid being shot at (“Serpentine, Shel, serpentine!”) — which is made all the funnier when Arkin’s character runs back to his original starting point and then takes Falk’s advice as if he were going for a second take; Arkin’s hysteria at discovering someone has done irreversible customizing on his vehicle (“I have flames on my car!”); and the bit in the chartered airplane where flight attendant James Hong gives Arkin the customary pre-flight instructions…entirely in Chinese. As for myself, I still get a hearty chuckle when Arkin announces he was down in the hotel lobby looking for Mexican porn (“El Hustlero”) and sister Kat and I have been known to make ourselves sick with laughter when we reconstruct the scene where Falk, at the wheel of the car, is describing a delicious Mexican dish (“They serve it with a large orange juice…grande”) and then interrupts himself with “Oh, Jesus…PIGS!” as he’s forced to stomp the brakes to avoid a procession of swine crossing the road.

Writer Andrew Bergman tried to collect lightning in a bottle a second time when he wrote the screenplay (as Warren Bogle) for Big Trouble (1985), a comedy that re-teamed Arkin and Falk in what would turn out to be a disappointing reunion (even the fact that the movie had a better director in Falk’s old compadre John Cassavetes couldn’t save it). He would, however, bring his quirky writing style to two successful comedies that followed in the wake of In-Laws’ success: The Freshman (1990) and Honeymoon in Vegas (1992). Bergman also received screen credit in the 2003 remake of In-Laws, a loose adaptation from the bigger-is-funnier school of comedy (have we learned nothing from 1941?) that recast Albert Brooks and Michael Douglas in the Arkin and Falk roles and served as little less than a reminder how much better the first film was and that, 30 years since it was introduced to the big screen, it still manages to find appreciative audiences…particularly those who are watching it for the very first time.

Comments:
Love this film...After my first viewing just a few years ago, I went out and bought it.

I swear much of that scene of Falk driving and discussing food (chicken sandwiches as well as Mexican I believe) was improvised. "Peter, talk about food while you drive - Action!"

It's silly, sharp and very much character-based as well. You don't see many comedies pulling all those attributes in.

"Flamenco dancers of death." Those images of those giant flies carrying off those babies...I remember seeing this film in the theater as a 10-year-old and it's always been one of those gems I've always been very protective of because I love it so much. Of course, Falk had some comic roots pre-Columbo, in Capra's awful remake of Lady for a Day, Pocketful of Miracles and as one of the two cab drivers in It's a Mad, Mad, Mad, Mad World.

Just seen Peter Falk in the film
In-laws, i agree with the comments on here, classic comedy etc Really Peter Falk was a brilliant actor ,a legend in what ever role he took,what ever part he played,such a warmth gentle person ,i seen his in interviews too...such great humour,
multi talented man.who well loved and missed by all.