It's tough being a deaf-mute saint 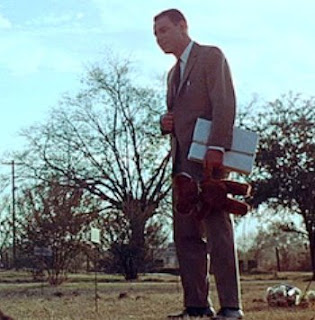 By Edward Copeland
Alan Arkin received his second Oscar nomination for playing John Singer, a deaf-mute man who exudes so much goodness and light that his very presence seems to change everyone he comes in contact with in 1968's The Heart Is a Lonely Hunter.

He tries to be a guardian for a mentally challenged man (Chuck McCann). He helps an African-American doctor (Percy Rodrigues) to see that not all white people are bad. He gets a brawling drunk (Stacy Keach) back on his feet. He helps a teen (Sondra Locke) whose family owns the boarding house in which she stays to find her own voice. The scene where Singer turns water into wine or brings the dead back to life must have been cut for time considerations.

Locke also received an Oscar nomination and she's almost as bad as she is in all the films she made while boinking Clint Eastwood, though she isn't quite as annoying, even with her awful fake Southern accent.

I know Arkin isn't really deaf, but if this had been based on a true story, Singer would have been fortunate not to hear all the bad accents around him.

Arkin is a good actor, but Singer is a blank slate. There are few times that you see any display of emotion, let alone hints of his background.

At first, it seems as if McCann is his brother, but it's only later you realize that Singer has taken responsibility for him.

Robert Ellis Miller's direction keeps the movie crawling along in its state of reverence. The saintly treatment of the Singer character makes the film's conclusion even more puzzling, since there are no clues leading up to it.

Comments:
I'm on a crappy business trip right now that I can't stand. This post gave me a good laugh. Thanks. Seriously, thanks. It cheered me up.

Thanks Ed. This is one of those 60s/70s films I haven't seen but have been meaning to. Another is Puzzle of a Downfall Child and The Effect of Gamma Rays on Man-in-the-Moon Marigolds. Both unavailable on Netflix.

Hopefully it can get the bad taste The Incredible Hulk reboot has left in my mouth.

Haven't seen it. Sounds too much like "Forrest Gump" for me. I didn't see that one either and won't - ever.

On the other hand, I'm very glad I read your review. It's so funny!