You never forget the truth; it just gets easier to lie 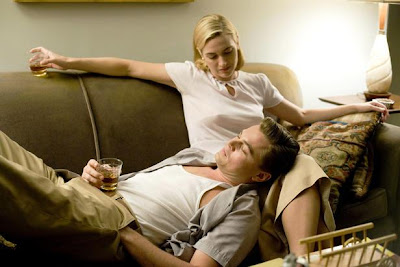 By Edward Copeland
No matter how well manicured the lawn, how well dressed and behaved the couple, you can never be certain what's going on once the front door is closed, especially in the 1950s suburbia of Sam Mendes' Revolutionary Road, a film some are finding depressing beyond words but which I found riveting and remarkable.

Kate Winslet has compiled an impressive body of work in nearly a decade and a half and she's only 33 and in my opinion Revolutionary Road may be the topper. As April Wheeler, the young '50s housewife whose life hasn't gone in any direction that she'd hoped for or enjoyed, Winslet is magnificent. When I mentioned on Facebook that Winslet has the Oscar in the bag, no matter what degree you like or dislike Revolutionary Road, someone wrote to the effect "unless the viewer had slit their throat first."

While it's certainly true that the film is not a laugh riot, I had nowhere near that reaction and I still think even the film's biggest detractors have to recognize Winslet's brilliance here (plus if she's a double nominee this year bringing her career total to seven, will they want to make her the losingest actress of all time?).

As much as I love Winslet, I don't want to leave the impression that she's the whole show because Leonardo DiCaprio gives one of his best performances as well as her husband Frank, similarly given to uncertainty about where he's going and where he wants to be. He's not a faithful husband, but the film doesn't make him guilty for the marital fissure. Alice is equally responsible, yet neither is to blame.

In addition to the great work by the leads, there is solid support from Dylan Baker, Kathy Bates, David Barbour and Kathryn Hahn, among others. The prize among the supporting players though goes to Michael Shannon as Bates' unstable son. If Viola Davis deserves Oscar consideration for her single lengthy scene in Doubt, then Shannon is equally worthy for his two electric appearances in Revolutionary Road.

Sam Mendes beautifully tells the tale through Justin Haythe's adaptation of Richard Yates' novel in his best film since his Oscar-winning debut with American Beauty. While Mendes is again dealing with suburbia, albeit period suburbia, it's not a satiric take and the time period almost is irrelevant because the sadness and truths are universal and heartbreaking.

While I can see why the film would be a depressing time for some, for me Revolutionary Road is one of 2008's best films.

Comments:
I haven't seen this yet, but the reviews have been all over the map. As you mention, some critics are calling it too depressing for words - and yet, there are others who accuse it of soft-pedaling the bleaker aspects of the Yates novel. Again, I can't judge what I haven't seen, but it certain feels as if this is the kind of extremely divisive film that may not appeal to enough Academy voters to get it a whole bunch of nominations.

Like you, I think Winslet is due - I think they're sort of under the gun to give it to her at this point. However, do wonder if it was a bad decision to make her compete against herself for votes. If half of the people who want to see Kate win an Oscar vote for her for this, and half vote for her for The Reader, she'll be shy on both counts.

And a lot of people prefer her in The Reader.

Winslet is quite fine in both films, although I found her Revolutionary Road performance was all edges (totally in control, totally out of control) and no center. I'm glad, Edward, that you talk about the film's univesality, which I, too found. Most people are talking about it in term of suburan sterility, which may have been novelist Richard Yates' point but it is not Sam Mendes point. This is scenes from a marriage between a gypsy and a domestcated American man.

I haven't seen The Reader yet to compare it with.

RR's primary problem is the script, particularly the dialog, which is quite mesmerizing in spots, but which I found just god awful most of the time. It's a fine example of direction and acting elevating a otherwise tin-eared screenplay into a potent slice of drama. Mendes' tittering at the 1950s milieu is distracting, but otherwise I think it's a strong film. The leads are both excellent, particularly Winslet; the thing looks gorgeous, and is even visually poetic at times (thank you, Mr. Deakins); and Mendes exhibits a significant leap in thematic ambition compared to American Beauty.

In fact, I would go so far as to say that the choice of director (that guy who made American Beauty) and leads (that couple from Titanic) is almost subversive. I got a strong sense that RR is playing with our expectations to deliver a scathing portrait of interpersonal dynamics and particularly of misogyny. That's why I don't understand attempts to draw attention to the similarities between RR and AB, as if a director's use of a comfortable milieu were somehow indicative of artistic vacuousness. Regardless, it's a facile comparison. The spiritual void of suburbia and middle class America in general are thematic elements in AB, but there are *plot* elements in RR, or motifs at best. RR is quite plainly a film about a relationship's disintegration, and how insidious personal flaws (insidious because the characters' reputed self-awareness) and rank sexism contribute to that disintegration.

I treated myself to a Winslet double features today. Thank God for poorly monitored multiplexes where you can pay for one film and see as many as you like.

I'm a little more skeptical now than I was before about Winslet's chances of pulling off the Oscar double. She's good in both films, but I think her performance in The Reader is in every way superior, and will get more votes. The lead actress category is where she also has more serious competetion. Hathaway is fine, if nothing special, and Streep's performance in Doubt is a qualified success - I'd probably rank both of those performances above Winslet's, however marginally. Career-best.. really, Ed?

I didn't hate Revolutionary Road, but I didn't like it very much, either. This has very little to do with how depressing the content is - in some ways, The Reader is actually the more depressing of the two, but it's a better (albeit still a rather cold) film with more believable characters and situations. I understand why RR's bleakness would be a turn-off for some - but then again, Scenes from a Marriage was no walk in the park (there are similarities), and that was a genuinely engrossing portrait of a marriage in crisis which kept me rivetted throughout. In addition to what Andrew has observed about the script - the dialogue is problematic, especially when it's trying approximate period slang - I found both principal characters singularly unlikeable. Perhaps that was the point of the film - still, it's hard to feel a whole lot of sympathy for such obtuse, selfish and self-absorbed people, especially when they seem so intent on making each other as miserable as possible. Just get a divorce and stop torturing each other, already - and as for you, April, find a hobby...take an art class...hell, read a book. Just leave the poor jerk alone.

Also, I think at some point 21st century Hollywood has to figure out a way to do the 1950s in a way that doesn't feel glib and artificial (it's the only decade of the 20th century that filmmakers and screenwriters perpetually seem to miss the boat on). "Mad Men" is technically the early 1960s - but it's the same problem.