It's not a chick flick, but it is a damn good movie 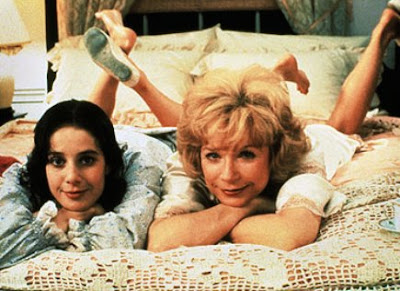 By Edward Copeland
Before I begin expounding in earnest about why I love Terms of Endearment (which turns 25 today) so much, I'd like to talk about an old bugaboo of mine that I haven't spoken of at length on these virtual pages: There is no such thing as a chick flick. There are merely good movies, bad movies and those in between and Terms of Endearment is a very good movie and if you disagree as astronaut Garrett Breedlove so memorably says, "You need a lot of drinks." Not to break the ice, but to kill the bug you have up your ass.

Let's get this chick flick nonsense out of the way quickly so we can get on to the movie. I've enumerated my points against the phrase.

1. It assumes only women will like the movie
It's insulting to say something that has subject matter about women (which nine times out of 10 are written by men) will not be understood or appreciated by men if the movie is a good one. The corollary also is true as there is no such thing as a "guy movie." I've known plenty of women who have loved Die Hard as much as men.

2. The label is too often used to excuse bad movies
If a male critic reviews a movie (let's say Beaches) and says it's bad, some will try to dismiss the criticism because "it's a chick flick" as if that makes it some sort of special needs child that needs its own grading scale. No. Terms of Endearment succeeds as a great movie. Beaches just sucks in a supremely mediocre way (and I'm being kind in only calling it that).

3. It is insulting to women.
In much the same way, it assumes a "chick flick" won't appeal to any man, it assumes that all women have the same tastes. All movie opinions are subjective. I'm sure there are women who don't like Terms or Beaches or countless others saddled with that label. There's nothing wrong with them but there is something wrong with people who want to pigeonhole every member of an entire gender into one way of thinking on a subject. 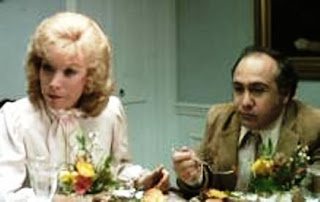 Meanwhile, on to more important matters, namely the film writing and directing debut of James L. Brooks. His mark on television itself was fairly impressive: producing and writing on The Mary Tyler Moore Show and Taxi among others and later going on to executive produce The Simpsons. Very few people win three Oscars for the same movie, so Brooks' achievement with his adaptation of Larry McMurtry's novel Terms of Endearment proves quite an impressive film directing debut. His second writing-directing effort, Broadcast News, would turn out even better though Oscar failed to smile on it. Brooks' big-screen efforts since have ranged from middling (As Good As It Gets) to downright awful (Spanglish). Though 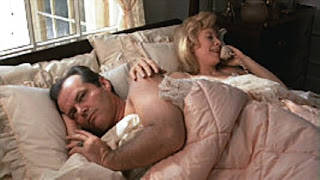 Terms has a reputation as one of the great tearjerkers — and don't get me wrong, unless you are made of stone, tears will be shed — its essence is more that of a comedy. Brooks builds to the tonal shift quite stealthily, adding the elements of dysfunction in the marriage of Emma and Flap Horton (the too-seldom-seen Debra Winger and the underappreciated Jeff Daniels) but using the comic courtship of Aurora (Shirley MacLaine) and Garrett Breedlove (Jack Nicholson) as a counterbalance to keep it light. Brooks admits in the DVD commentary that in many ways he felt he had to do it that way so he could use the word cancer to cause a spit take late in the film. He does and it works. Perhaps Brooks' greatest feat was his invention of Breedlove, who didn't exist in McMurtry's novel, where Aurora was pursued by a vast array of suitors, a little bit of which remains in the film, but Nicholson's Oscar-winning astronaut is one of the many ingredients that lifts the movie into the stratosphere. (It's interesting that two of the best films of 1983 involved astronauts, the fictional one here and the real ones in The Right Stuff.) 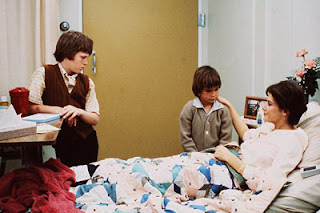 In fact, Brooks' achievement would have been impossible without the cast he assembled. Some find MacLaine's Oscar-winning turn too shrill and over-the-top, but Aurora Greenway is shrill and over-the-top and, to me at least, it was the performance of MacLaine's career. Her only serious competition that year was in the very same movie and in an ideal world, she and Debra Winger would have tied because every time I watch Terms of Endearment, Winger's performance impresses me more than the last time. Watching her again, parts of Emma reminded me of a friend I loved dearly and still miss and whose birthday would have been tomorrow. Whether it's expressing pure joy or pure anger, she never strikes a false note. Bob Newhart has a reputation for doing the greatest comic telephone call routines ever. I'd make the case that Winger is the greatest telephone scene actress ever, making every one of the numerous calls between Aurora and Emma seem real and punctuating them with wit and pathos. While those three principals snagged Oscar nominations (and two won), John Lithgow also grabbed a nomination for his small but sweet role as an Iowa banker who has an affair with Emma. Jeff Daniels as Emma's disappointing husband Flap didn't earn as much attention as he should have, something that seems to have plagued Daniels to this day. Will he ever earn an Oscar nomination for anything?

The smaller roles largely were cast with local Houston-area actors and wise selections were made such as Lisa Hart Carroll as Patsy and Betty R. King as Rosie. They didn't reprise their roles in the sequel, The Evening Star, which holds the distinction of being the worst sequel ever made to an Oscar-winning best picture. Actually, I've never seen The Sting II, where Jackie Gleason and Mac Davis took over the Newman and Redford roles, but I'll give it the benefit of the doubt that it can't be worse than The Evening Star. I'd rather stick needles in my eyes than sit through The Evening Star again. Terms of Endearment, however, always will hold a place in my heart.