Let them write the history, let the pilot fly the plane 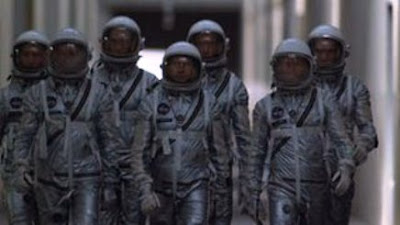 By Edward Copeland
After some fellow fliers mocked Gus Grissom (Fred Ward) following his landing mishap, test pilot extraordinaire Chuck Yeager (Sam Shepard) silences them by saying, "It takes a special kind of man to volunteer for a suicide mission, especially when it's on TV." It takes a special kind of filmmaker to make a film as great as The Right Stuff, even if Philip Kaufman never has come close to equaling it again 25 years later.

It seems as if too many films these days are too long which makes it all the more amazing to re-watch The Right Stuff and feel how fleetly its 3-hour-plus running time flies by. It's a remarkable feat that its pacing holds up so well for someone pushing 40 and watching it on DVD from a bed as it did when he was 14 and saw it in a theater. 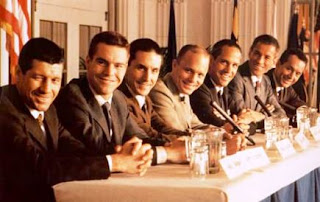 Part of this can be attributed to Kaufman's approach to the material. In an extra on the DVD, Kaufman says he attempted to adapt Tom Wolfe's stylized nonfiction book with a similarly stylized film (going so far as to hire an acrobatic comedy troupe as the slapsticky press corps). It's easy to forget what a cast the movie has, especially if it's been awhile since you've seen it. Fans of Robert Altman's Tanner '88 will enjoy seeing Pamela Reed and Veronica Cartwright interact as astronauts' wives years before their work in the great HBO series. Harry Shearer and Jeff Goldblum provisws fun comic relief as NASA recruiters. It's difficult to forget Donald Moffat's LBJ, shaking his limo in anger because John Glenn's wife won't cave to his PR desires. "Isn't there anyone that can deal with a housewife?" LBJ shouts in frustration. Of course, there are the movie's version of the Mercury astronauts and pilots themselves. I'd forgotten Lance Henriksen played Wally Schirra, though he has few lines. Ed Harris works wonders as John Glenn, seemingly imbued with a light and decency seldom seen in Harris' subsequent roles. Dennis Quaid oozes charm as Gordo Cooper and Scott Glenn lends a solid presence as Alan Shepard.

Watching The Right Stuff now, you can't help but compare it to Apollo 13. Ron Howard's fine film thatlacks so much depth when compared to Kaufman's movie. The astronauts of The Right Stuff ccertainly come off as heroic, but they're also multidimensional — human and flawed, prone to hard drinking and hard living. You also get a sense of the manipulation and politics surrounding the Mercury program that's completely absent from Howard's film. One thing both films do have in common is the amazing ability to create suspense out of real-life events whose resolution the viewer already knows. Both films also amaze when you think that we were ever able to get into space with the technology available at the time.

However, of all the great aspects of The Right Stuff, to me the real star remains cinematographer Caleb Deschanel. Deschanel belongs on the short list of great directors of photography, yet amazingly he doesn't have an Oscar despite five nominations (in addition to The Right Stuff, he earned nods for The Natural, Fly Away Home, The Patriot and The Passion of the Christ. Other credits include Being There, The Black Stallion and the forthcoming Abraham Lincoln Vampire Killer as well as directing the films The Escape Artist, Crusoe and several episodes of Twin Peaks). Deschanel should have won here, though it's hard to argue with Sven Nykvist's win for Ingmar Bergman's Fanny and Alexander.

Comments:
A fine piece on a fine film. I remember seeing this for the first time in 70mm, and it blew me absolutely away. And I was a fan of Tom Wolfe's book, too. The movie didn't disappoint.

Over at Jonathan Lapper's blog, we were discussing another Kaufmann film, the remake of "Invasion of the Body Snatchers," which preceded this one ... most of us agreed that the remake was at least the equal if not the superior of the original.

This is a great film that I have seen countless times. It has kinda been forgotten over the years which is a shame. As you point out, it has a killer cast and really pushed the envelope in the biopic genre at the time... it manages to be both reverential and satirical. No easy feat but Kaufman pulls it off, I think.

Have you checked the BFI book on the film by Tom Charity (I believe)? It is very good and he interviewed Kaufman for it where he talks about some of the avant garde techniques he utilized to pull off some of the outer space and sound barrier effects.