A well of tradition to draw from 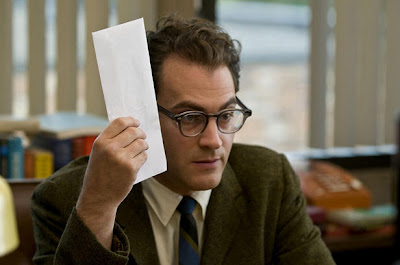 By Edward Copeland
Something happens to the best filmmakers. Even when they are good, once they delve into their own ethnic or societal upbringing, they achieve a deeper greatness, whether the film in question is explicitly autobiographical or not.

Steven Spielberg finally seemed to grow up once he made Schindler's List, even though he'd made great films before that. Martin Scorsese and Ingmar Bergman hit high watermarks early because they didn't delay those explorations. Other filmmakers such as Brian De Palma remain hollow ciphers with little interest in self-examination (or beyond making a couple of interesting film sequences per film).

Though No Country for Old Men showed a new step forward for the Coen brothers, A Serious Man is their first film that openly addresses growing up Jewish in late '60s Minnesota and it is unlike anything they've made before, displaying a maturity unseen in their work while still being great and entertaining.

After opening with a short Jewish fable set in the European past, A Serious Man settles into its Job-like tale of Lawrence Gopnik, a college physics professor in 1967 Minnesota who tries to lives a good life until realities he was completely oblivious to start striking him one after another as his son's bar mitzvah approaches and he's due to learn whether he will get tenure at his university.

Michael Stuhlbarg plays Gopnik with a sense of wide-eyed disbelief at the array of misfortune the befalls him. For some reason early in the film, he momentarily struck me like Bryan Cranston's Walter White on television's great Breaking Bad, but Gopnik isn't that complicated nor terminally ill and he certainly isn't going to become an aspiring drug kingpin. Early in the film, the phrase "Receive with simplicity everything that happens to you" appears on the screen and that appears to be Gopnik's approach except for a slight breakdown here or there. 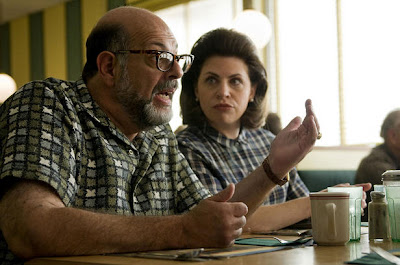 When his wife Judith (Sari Lennick) suddenly announces that she wants a divorce so she can have a ritual Jewish marriage with their friend and widower Sy (Fred Melamed). Sy is an unusual man, wanting to be unusually compassionate and cooperative to Larry while he busts up his marriage. The Gopniks' two children seem disinterested in what's going on with the teen daughter trying to gather cash for a nose job and the son more worried about lousy TV reception for F Troop and money he owes his pot dealer.

Larry doesn't have it much better at his job. As he awaits the tenure decision, he's told that someone is sending anonymous notes questioning his moral turpitude and he's being harassed by a South Korean student and his family who feel that he's been harassed because he's flunking physics and Gopnik won't change his grade or accept his bribe which he may or may not have given the professor. 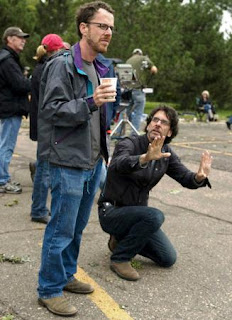 All of this sends Gopnik on a spiritual journey, embracing his Judaism in a way he never has before, trying to find answers to the all these questions. The Coens keep their own points-of-view close to their chest. You can't be sure if they find all this religiosity silly, if they are viewing Larry's travails from the viewpoint of God or if they take his search seriously.

Whatever the Coens' real-life take, A Serious Man works. In Broadcast News after Albert Brooks' character's disastrous try at anchoring the weekend news, he starts laughing when he describes it to Holly Hunter, explaining that, "At some point, it got so off-the-chart bad, it just got funny." Larry Gopnik never feels that way, but the audience of A Serious Man certainly will as its tone is humor of the darkest shade.

The Coens always have been strong filmmakers, but at times their tendency toward showiness got in the way, especially when the films in question were some of their lesser efforts. There is very little of that here as they do yeoman work on what may be the best screenplay they've written. They're aided ably by frequent collaborators such as composer Carter Burwell, cinematographer Roger Deakins and that phantom film editor Roderick Jaynes.

The entire cast, composed mostly of familiar faces and unknowns, all do good work. Of the supporting cast, I'd single out Melamed and George Wyner as one of the rabbis Larry sees. However, the film revolves around Larry, and the relatively unknown Stuhlbarg pulls it off. His performance is a wonder with so much contained in his face which reminded me of Harold Lloyd. The Coens were smart to place their faith in him to anchor A Serious Man because I can't visualize the film working with another actor as Larry Gopnik.

Excellent review of a great movie. I agree that casting Stuhlbarg and other unknowns (the most familiar face being probably Richard Kind) was a masterstroke. It lets us focus on the characters rather than Clooney or Pitt or another celebrity acting silly. I've enjoyed the silliness in some of their movies, but clearly the Coens wanted a deeper level of intimacy this time around. I'd say they got it.