What acting is all about — unemployment

BLOGGER'S NOTE: This post originally appeared Dec. 17, 2007. I'm re-posting it as part of The Sydney Pollack Blogathon occurring through July 22 at Seetimaar — Diary of a Movie Lover 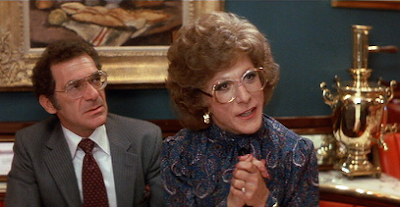 By Edward Copeland
Film directing isn't often compared to completing a jigsaw puzzle, but that analogy seems most apt in describing exactly what Sydney Pollack accomplished with Tootsie, which opened 25 years ago today. What began with a story by Don McGuire and Larry Gelbart and a screenplay by Gelbart became the center of a fight between the film's star, Dustin Hoffman, and Pollack, and ended up with countless other notable scribes (among them Barry Levinson and Elaine May) taking shots at the script. In the end, the final screen credit went to McGuire and Gelbart for story and Gelbart and Murray Schisgal for screenplay, but Pollack's ability to weave the best parts of all those drafts and spin them into cinematic and comic gold deserved a credit all its own. If that feat of wizardry weren't enough, Pollack also turns in a fine supporting role as well, playing Hoffman's character's agent. 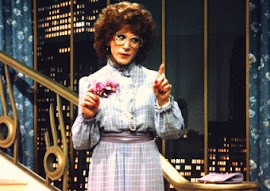 When originally released, while I loved Tootsie, being 13, my 1982 heart still belonged to E.T.: the Extra-Terrestrial, released months earlier. However, as the years went by, Tootsie grew in my estimation while E.T. became almost too schmaltzy to watch, so much so that I haven't returned to it in nearly 20 years. Perhaps my view would change again now. What makes Tootsie soar, like many other films, comes from the fact that its greatness proves impermeable to even a picky, critical mind such as mine. I mean, how exactly does "Dorothy Michaels" (Hoffman's drag alter ego) get paid when she doesn't exist and wouldn't have a Social Security number? Of course, the finale, involving an accident that forces the soap to redo a show live at the last minute seemed ridiculous to me even upon first viewing, but why question the logic of a scene that uproariously funny and with a payoff so huge? The brilliant ensemble cast, in addition to Pollack's patch job, holds Tootsie together.

Hoffman, deservedly, gets a lot of credit for his drag creation, but I don't think he gets the kudos for Michael Dorsey that are due him. It might seem as if Hoffman's reputation for being difficult, makes Michael a cakewalk, but he not only plumbs 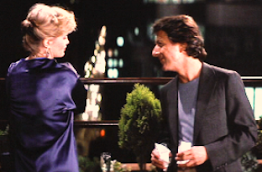 Dorsey's depths for comedy and pathos, but convincingly depicts his transformation from a horny prima donna to a more sensitive man (At one point, Michael acknowledges that he thinks Dorothy is smarter than he is). The opening sequences, depicting his problems as an actor who hasn't had a job in two years, come stocked full of laughs, such as the scene where his agent George Fields (Pollack) explains the reasons he his client can't get work while Michael insists in his own defense "that nobody does vegetables like me" to justify his firing from a commercial where he played a tomato. Hoffman and Pollack don't carry the film alone. Ironically, the weakest link in the cast, Jessica Lange, was the only person to win an Oscar, a consolation prize for losing lead actress in Frances that year to Meryl Streep in Sophie's Choice. Frankly though, Lange wasn't even the best supporting actress in Tootsie, though her character provides the key to the film's serious undercurrent of exploring the way men sometimes treat women in all ranges from employment discrimination to out-and-out misogyny, but the message never interferes with the laughs. 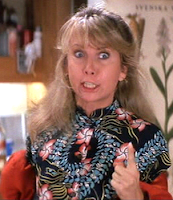 Teri Garr's great turn as Michael's acting colleague and friend Sandy did earn an Oscar nomination, but she lost to Lange, as did my personal choice for 1982, Glenn Close in The World According to Garp. Garr, however, clearly led the field of women in Tootsie (hell, I could make a case for Doris Belack as the soap's producer over Lange). Always clandestinely stuffing food into her purse at parties, having Michael "enrage" her for an audition and her go-for-broke rage explosion when she learns Michael has been deceiving her provide some of the film's most priceless moments. The ensemble contains so many great supporting turns by the men in the film, I'm almost afraid to single anyone out. In addition to Pollack, viewers receive the gifts of George Gaynes as the soap's aging star, wholly dependent on cue cards and 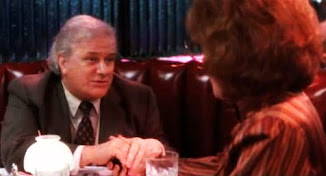 prompters, who hits on every new cast member; Dabney Coleman doing the chauvinistic asshole character he practically patented in the early 1980s as the soap's director; the great Charles Durning, who earned an Oscar nomination that year, albeit for The Best Little Whorehouse in Texas with his single but memorable scene singing and dancing a little "Sidestep," as Lange's widowed father who falls for Hoffman's Dorothy and longs for the days when men and women "were what they were." His proposal scene proves both funny and touching (though the comic gem resulting from this sequence comes later when Michael tells his agent about the offer and Pollack asks him what he said, with genuine happiness that makes him forget about the truth of the situation for a moment. Along with Belack, another fine supporting female in the cast happens to be a young Geena Davis who plays another actress on the soap and shares a dressing room with Dorothy. 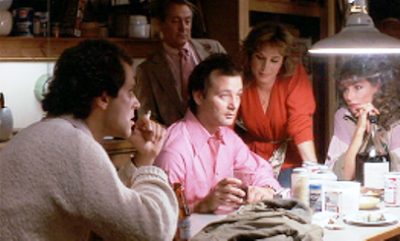 The prize for the best of the supporting men though goes to the great Bill Murray, in a role that legend says he improvised completely and I believe it. He plays Jeff, Michael's playwright roommate, and if he truly did come up with all his own dialogue, what a treasure trove he unleashed. (My personal favorite: When he says he wishes he had a theater that was only open when it rained.) Even though Tootsie lags a bit when it takes a detour to Durning's farm, it's forgivable since those scenes give the film part of its heft and allows for even more comic grace notes. How Tootsie lost to the noble but limp Gandhi (including for original screenplay, patch job or no patch job) still baffles me.

Comments:
Tootsie is one of my all time favorite movies, and it topped my ten best list for 1982. I would have given the Oscar to Teri Garr, but I don't think Lange is bad here. I know Lange has been terrible in plenty of movies, but I have to defend her on occasion from the haters at ECOF! She's good here, and has chemistry with Dustin Hoffman and Charles Durning.

Speaking of Durning, he's charming both here and in The Best Little Ho House in Tex-Ass. I still sing his little "Side Step" number and dream that someday they'll do a D.C. version of the musical and Durning's character will be played by Bill Clinton.

Sydney Pollack once said that he cast himself because he needed an actor who looked like he could intimidate Hoffman. Pollack is a far better actor than director, so I'm always happy to see him show up onscreen, even in dreck like Eyes Wide Shut and Husbands and Wives. (Ut oh, here come the Kubrick and Woody Allen folks with pitchforks! Gotta catch me first!)

Bill Murray is spectacular here, and my favorite Murray scene is his perfectly timed "You slut."

Hoffman is not very convincing looks-wise as a woman, but he still gives one helluva performance. I panned Gandhi, so I'd give Best Pic to Tootsie. But Best Actor belonged to Paul Newman in 1982.

Oh, and how can I forget that Stephen Bishop song? Bishop is not a tolerable singer (that "Down in Jamaica" song makes me want to kill people) but his Tootsie number is the only time I didn't want Bluto from Animal House smashing his guitar.

I thought Lange offered the indispensible function of keeping the movie grounded amid all these wacky characters. She gave Michael an impetus to change and brought some reality to the proceedings without dragging them down.

Tootsie is my favorite movie of 1982. It just seems to me like it's..... dare I say perfect? Yes. It's perfect for me. It has outrageous laughs and touching moments. So, for this great film to lose over the zzzz....... film Gandhi is just...... terrible.

I even prefer An Officer and A Gentleman than Gandhi, though I believe that Ben Kingsley is great. However, the Oscar REALLY GOES TO DUSTIN HOFFMAN FOR TOOTSIE, TERI GARR FOR TOOTSIE AND SYDNEY POLLACK FOR TOOTSIE.

I want to second all the warm and enthusiastic praise of Tootsie, still a terrific movie after all these years - but I also want to speak up for Gandhi, particularly its Best Original Screenplay Oscar win (which some people forget is not the same thing as MOST Original.) What I see as the difference between John Briley's Gandhi script and those of Tootsie and E.T. is that it would read just as interestingly on the page as it does brought to life and coming off the screen. I truly believe that this could not be said for Tootsie or E.T. (as brilliant as they were, the acting and directing brought them respectively to life, rather than the screenplays.) Gandhi may be a history-lesson-on-film, but it's a damn-well-written and interesting one, full of literate dialogue as well as ideas thoughtfully expressed and powerfully dramatised; sure, there are perhaps a few too many quiet moments and a bit too much padding in the film as a whole, and I would rather Spielberg had won something on Oscar night for his greatest achievement instead of 2 for Attenborough (though it's hard to say how I'd prefer to split them myself) - but at any rate: GO TOOTSIE! GO GANDHI!! GO E.T.!!! :-)

In reality, the Tootsie award for screenplay should go to Sydney Pollack because it's miraculous that it turned out so wonderfully considering how many different writers worked on drafts and the three writers nominated were just those that WGA arbitration decided deserved the screen credit, but Pollack basically just cut and pasted the best parts of multiple drafts and turned it into what appears on the screen. Not to mention having Bill Murray improvise his entire part. Truly a wonder that they all pulled it off.