From the Vault: JFK

BLOGGER'S NOTE: I'm re-posting this review, originally written when JFK opened in 1991, as part of The Oliver Stone Blogathon occurring through Oct. 6 at Seetimaar — Diary of a Movie Lover 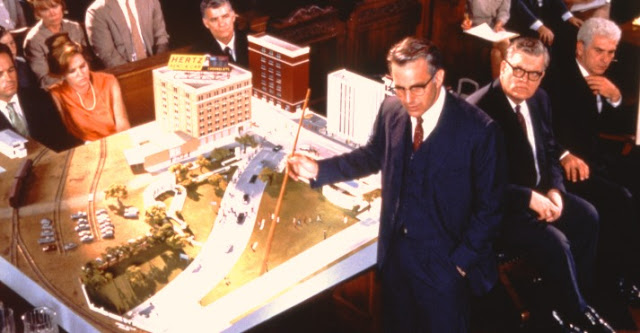 Seldom has reviewing a film proved as problematic as Oliver Stone's JFK. So much has been written about what is — and isn't — accurate in this film that I went in desperately trying to view solely on a cinematic basis, ignoring the fact that it concerns that fateful November day in Dallas in 1963. That sort of objectivity ends up being impossible because JFK demands evaluation and analysis and obliterates any chance of passive viewing with its strange hybrid of thriller, murder mystery and documentary.

Kevin Costner plays the lead in Stone's story as New Orleans District Attorney Jim Garrison, who launched a full-fledged investigation into the conspiracy he believed left both John F. Kennedy and the country mortally wounded. "Fundamentally, people are suckers for the truth," Donald Sutherland's Deep Throat-type character tells Garrison at one point in the film. While it remains to be seen whether Stone's version contains more truth than the preposterous idea that Lee Harvey Oswald (played well by Gary Oldman, part of the film's gargantuan, excellent ensemble) acted alone, fascination with the assassination keeps this three-hour film compulsively watchable.

Problems plague the film other than the ones that spark so much debate. Despite allegations that the film comes off as homophobic (I see why that charge has been leveled) or exists as nothing more than propaganda (could be), it fares fairly well. Stone keeps the pace speeding along most of the time except for a middle section that lags. His editing and jump-cuts that mix real footage, re-creations and original material triumph, especially in the film's very good opening segments. The movie stumbles the most when it presents scenes of Garrison's domestic life with his wife Liz (a thankless task given to the usually reliable Sissy Spacek, saddled with dialogue along the lines of "I think you care more about John Kennedy than your own family!") It also doesn't help that Garrison's son (played by Stone's own 7-year-old son Sean) never ages though the film covers more than half a decade.

Other demerits include John Williams' score, which nearly overpowers important scenes such as Sutherland's magnetic spinning of key elements of the "conspiracy" so that it makes sense as he's sharing it, and, it should really go without saying, Costner himself. While he manages to be fairly consistent with his Southern accent, he still can't emote effectively. He's a star, not an actor. Much of the popular opinion about the real Garrison refers to him either as someone seeking publicity or a crackpot. Regardless, Costner can't convey his obsession or possibly unstable nature. In his overrated Dances With Wolves, his lack of acting skills presented a similar problem. Both JFK and Dances would have been better served if they'd cast a performer capable of portraying people losing control. Lt. Dunbar tries to commit suicide and then asks to be placed on the frontier, but Costner couldn't pull off that conflict any more convincingly than he pulls off Garrison's drive for the truth.

Thankfully, able supporting performers abound to pick up the slack, even if they appear for a single scene. Actors deserving particular praise include Ed Asner, Kevin Bacon, John Candy, Jack Lemmon, Walter Matthau, Joe Pesci, Sutherland and Tommy Lee Jones, who gives a good performance despite the possible perception of his character as an offensive stereotype. Structurally, the film weakens in its final act by climaxing with Garrison's prosecution of Clay Shaw (Jones). While this conclusion comes naturally to a film focused on Garrison, it seems anticlimactic to the film's real subject — dealing with the demons of the past. Stone's obsession with the Vietnam era equals Garrison's with Kennedy's murder. Methods separate Garrison's obsession from Stone's. Stone uses cinema as his rosary to drag the audience kicking and screaming into his personal confessional. With JFK, that's not altogether inappropriate. Even people born since the assassination grew up with the myths and the facts of Nov. 22, 1963, as part of their lives, though for most of the younger of us, Jim Garrison and his actual prosecution of Clay Shaw was something few of us knew about until Stone's movie.

Growing up though with the history of the Kennedy and Martin Luther King assassinations ingrained in our brains shortened our attention span of shock when John Lennon, Reagan and Pope John Paul II encountered bullets in a period of just a few months. The explosion of the space shuttle Challenger seemed to affect us for only an hour or two instead of the lifelong effect JFK's assassination had on an earlier generation.

Personally, I don't know if I buy the revamped Garrison theory that Stone offers. I don't see how anyone can believe Oswald acted alone or all the shots came from behind — watching the Zapruder film enlarged on the big screen makes the "back and to the left" motion of Kennedy's head unmistakable. However, Stone can't quite pull off the idea that the reason Kennedy was killed was so the Vietnam War could happen.

In that respect, JFK plays like a murder trial where only the prosecution presents its case. I'm certainly no apologist for Oliver Stone and I think most of his films grow weaker on subsequent viewings. Indeed, his tendency to pass off fabrication as fact can be troubling when most viewers can't tell the difference. Reservations aside, JFK holds one's attention firmly and deserves a look.

Comments:
We do be prone to emotional out-gassing, don't we?

It's a good thing Oliver Stone doesn't have that trait. You do realize that on the whole, it's a positive review, right?