Harry Potter and the Deadly Huhs?, Part I 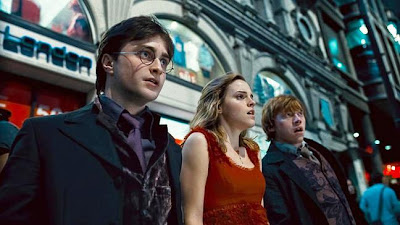 By Edward Copeland
When this blog first began (actually before it began, when I would just jot short movie musings on my long defunct political blog the Copeland Institute for Lower Learning), one of the first films I wrote about was Harry Potter and the Goblet of Fire under the title "Harry Potter and the Defiance of Sequel Expectations." It could hardly be called a review, as short as it was, but one thing I wrote was "How is it that a film series can keep getting better as it goes on instead of worse?" I fear I jinxed it with those words about the fourth in the series, because the fifth slipped just a bit, while the sixth installment flummoxed this viewer who'd never read a word of any of J.K. Rowlings' books. Now, I've caught up with Harry Potter and the Deathly Hallows, Part I and it seemed to me as if I'd walked into a four-hour movie after missing the first two hours. It's a tiring befuddlement missing any sense of fun, suspense of consequence or, most importantly considering its realm, magic.

One thing that's interesting in Deathly Hallows — but just briefly — is seeing Harry, Hermione and Ron (Daniel Radcliffe, Emma Watson and Rupert Grint) running around London for a change instead of their usual Hogwarts haunts. It did again raise the question I've always had throughout the series: If these kids head off to this wizardry school to matriculate their magical skills, but they aren't supposed to practice their powers back among the muggles, what exactly is the point once they graduate? Do they automatically get stuck in careers as teachers of future young wizards? I take it none of them head back to the regular world and embark on normal careers and retire their wands. (As an aside, Hogwarts always has professors for subjects such as Defense Against the Dark Arts, but does anyone there bother to teach the students math, English or science?)

Anyway, Hogwarts isn't part of the equation in Deathly Hallows anyway. It seems to concern "the ministry" which I'm guessing is the Harry Potter equivalent of Buffy Summers' Watchers' Council and that evil Lord Voldemort, the blank-faced bad guy with some sort of shared memories with Harry (who is supposed to be Ralph Fiennes, hidden somewhere beneath that pasty, featureless makeup) has destroyed it much as The Council got itself blown up. At least I think that's what Bill Nighy's character, dressed as if he accidentally got teleported to the set from a production of Arthur Miller's The Crucible, tells us.

Most of the adult characters are absent or make just cursory appearances here. There's very little of Alan Rickman's Professor Snape and a nice but all-too-brief appearance by Brendan Gleeson's Mad-Eye Moody. I do admit I did get excited when Imelda Staunton reappeared as Dolores Umbridge, since I believe her performance in Order of the Phoenix remains the best given by any actor in the entire series and an argument could have been seriously made for nominating her for supporting actress. Unfortunately, we get a bit of Dolores' little giggle and then she's gone again.

Of course, the sequence she appears in lacks the coherence that most of this overlong and tedious film does. Near the beginning, the good guys, worried about keeping Harry's location secret from Voldemort, take time out to attend a wedding but for the life of me, I can't tell you who the hell was getting married or why it should have mattered.

I don't know why the producers of the series have remained glued to director David Yates. Once Chris Columbus thankfully exited after the first two bland installments, that's when the series started getting better, first with Alfonso Cuaron and then with Mike Newell. They turned to Yates starting with Order of the Phoenix, which Staunton basically saved, but that film overall and two since have taken the series into a downhill spiral instead of up toward a rousing conclusion.

Many years ago, a bunch of my friends and I went out to see David Lynch's film of Frank Herbert's Dune the weekend it opened. As with the Harry Potter books, I'd never read any of the Dune books either. I knew I was in trouble when at the theater they handed each ticketholder a sheet with a long list of definitions for terms that would be used in the movie. What was I supposed to have done — bring along a flashlight so I could look things up as the movie played in case I got confused or lost?

I saw Harry Potter and the Deathly Hallows, Part I at home on DVD. I sort of wish it had come with one of those lists to help me understand what the hell was going on. Then again, a good movie doesn't require supplements to explain itself. If it's any good, the film stands on its own and speaks for itself.

Comments:
I must admit, I always thought that whole thing about 'giving out cheat sheets' for movies such as Dune was a bit of an urban legend. Whenever it was mentioned, it always seemed to be along the lines of "I heard this movie was considered so incomprehensible that they had to....". But apparently it actually happened! Can you recall the deal with these information pages? Were they prepared by the cinema? The studio? Did they get given out at every session? Inquiring minds want to know!!!

OOOOO a Snape poster would be amazing as would a Bellatrix Last range one. They are both awesome villains. I am SO looking forward to this movie, but like everyone else has said I’m also sad at the same time since it is the end. My sister is currently rereading all of the books in anticipation of the last movie. She is almost done with the first one. She also said she will watch all the movies in order after she reads them. It’s not fair that in one month the franchise will be finished for good :(

The Dune sheets were real. I didn't realize they were thought of as urban legend now. Wish I had saved mine. I assume the studios sent them out. They were fairly professionally done and given the theater I saw it at, I can't imagine its staff doing it on its own initiative. It would also go along with the studio re-editing it for TV and Lynch taking his name off that version.