Harry Potter and the half-baked script 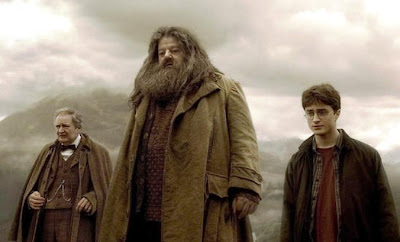 By Edward Copeland
With the arrival of each new Harry Potter film, I've made it clear that I've never read any of the books yet I've been amazed how each installment grew in depth and quality once they got rid of director Chris Columbus from the first two installments. The previous entry, Order of the Phoenix, slipped a little and was the first of the films that felt to me as if it had been condensed to the point that a lot had been left out from the book. However, Imelda Staunton's delightful performance, the best in the entire series, more than made up for that film's flaws. This time, with director David Yates returning to helm Harry Potter and the Half-Blood Prince was the first time, even including the Columbus efforts, where I watched most of the time bored and dumbfounded.

As with all the other adaptations, the Half-Blood Prince was written by Steve Kloves, the man whose great work as writer-director on The Fabulous Baker Boys inspired J.K. Rowling to select him to adapt her books to the screen in the first place. However, the Half-Blood Prince plays like a muddle. By the time it reveals who the Half-Blood Prince is, I still had no (and still don't have any) idea what that really meant and what its significance was.

As in Goblet of Fire, Harry's friends Ron and Hermione (Rupert Grint, Emma Watson) stay pretty much segregated to the sidelines except for one sequence where Grint proves quite charming and funny when Ron becomes enchanted by a love potion. Daniel Radcliffe still does fine as Harry, but this time out the heavy lifting seems to be handled even more than usual by the veteran British pros such as Michael Gambon, Maggie Smith and Alan Rickman.

The actor who shines the most in this outing is the series' newcomer, Jim Broadbent, playing a former potions professor that Dumbledore (Gambon) lures back to Hogwarts because of the connection he had to Lord Voldemort back when he was just a student named Tom Riddle and hadn't turned to evil. Every note Broadbent strikes — fear, guilt, excitement — seems just right. He's really the only aspect of the Half-Blood Prince that saves it from being a complete bore.

Director Yates' pacing is way off here. The atmospherics are solid as usual, but I don't know why this chapter came off as seeming so messy. The final book in the series is being broken up into two movies, so perhaps that will eliminate some of the problems of leaving things out, but it concerns me that Yates has been entrusted with the reins once again since his two efforts have been the weakest non-Columbus outings in the film series.

Second: I did notice your Kreative recognition and I'll follow up on that this weekend, I suspect. But, for now, thank you.

Fourth: Interestingly, the part you like best about Half-Baked Script, I mean, Half-Blood Prince is the part I struggled with Broadbent ... who in recent years has gone from an actor I looked forward to seeing to one I now dread. Too much character in his character acting for me, even in a kid-targeted movie such as this.

That said, with a performance like this one, I often think there can be a big difference between seeing it in the theater (as I did) and seeing it on a smaller screen at home (as I must presume you did). Maybe if the screen is smaller, Broadbent's performance doesn't seem so oversized.