Or without Larry "Bud" either

By Edward Copeland
In fact, you could say literally that Late Night With David Letterman wouldn't have started without Larry "Bud" Melman (aka Calvert DeForest) since he literally opened the first episode as seen above. His appearances provided some of the most memorable and funniest moments on Late Night and deserve a separate remembrance — even if you had to wonder if Larry realized his role in the joke. 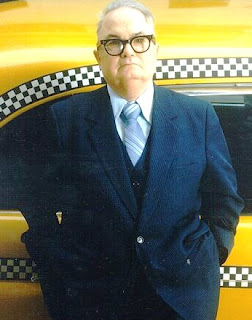 Even now. very little is known about how David Letterman came upon 60-year-old Calvert DeForest and turned him into Larry "Bud" Melman," let alone decided to take the gigantic risk of letting this odd little man with the giant glasses be the first thing audiences saw when they tuned in to Late Night with David Letterman for the first time on Feb, 1, 1982. Supposedly, for most of his life, DeForest worked for the pharmaceutical company Parke Davis, which Pfizer eventually took over. As awkward as he was in front of the camera DeForest actually worked some as an actor prior to Late Night, supposedly having appeared in five films prior to the talk show, not that any of those were memorable. The first credit was 1972's While the Cat's Away…, a soft-core sex comedy written and directed by an auteur in the genre, Chuck Vincent, who would go on to make late-night Skinemax classics such as Warrior Queen starring Sybil Danning and Donald Pleasence and Young Nurses in Love. In 1976, he was part of the entourage in a comedy called Apple Pie. DeForest is listed as part of the cast of 1979's Blond Poison. a film that IMDb provides no information about except that its cast also allegedly featured James Remar. 1980 found DeForest in the Greek production Savage Hunt. The fifth and final pre-Late Night film that DeForest made comes closet to a title people have heard. They filmed the crude comedy Waitress! in in 1981, though it didn't get released until 1982. Its large cast included in small roles Anthony Dennison (under the name Anthony Sarrero) who would find fame on Crime Story and Chris Noth who would go on to Law & Order and Sex and the City. 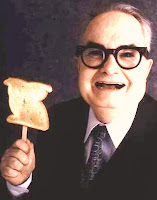 While DeForest might have been his real name, while Letterman worked on NBC, he always was Larry "Bud" Melman (unless he was Kenny the Gardener or Johnny Carson). When NBC screwed Dave over for The Chin, Larry followed Dave to CBS but NBC claimed that "Larry 'Bud' Melman" was part of the network's intellectual property, so on Late Show, he had to appear as Calvert DeForest, which he did through 2002 when his health declined too much for him to continue. DeForest died in 2006 at age 85. Thanks to YouTube, I don't need to try to describe some of the best Larry moments. You can see them for yourself. However, it can't be denied what a key role Melman played in the Late Night phenomenon. Carson played characters. Steve Allen "interviewed" them. Letterman mixed the real and the imagined into a potpourri of zaniness. Writer Chris Elliott provided his string of characters. Stage manager Biff Henderson played himself as did announcer Bill Wendell and his assistant Barbara Gaines. The driver of the NBC Bookmobile was really Kathleen Ankers, the show's scenic designer. Another writer, Gerard Mulligan, often became involved as well. The cue-card guy even got in on the action as did the show's director, Mr. Hal Gurtner "THAT'S GURNEE, EDWARD." CBS turned Paul Schaffer's band into an "orchestra." When they were an hour later on NBC, they were "the world's most dangerous band." One of the first memorable Melman moments claimed that he owned the show, starting it with the fortune made from his bus company.


Larry helps a viewer with insomnia,

From the second Custom-Made Show, they put Larry in a bear suit and send him out in the halls of Rockefeller Center to try to get change for a $10 bill.


Finally, the classic: They sent Melman to the Port Authority Bus Station to greet arrivals with decidedy mixed results which only made it funnier. It comes in three parts.Part I: