A Different Kind of Cop Show 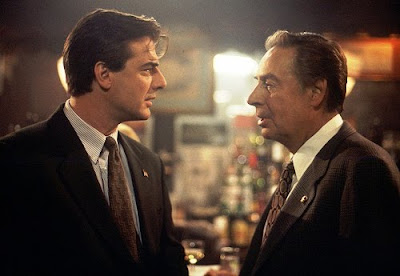 By Brit Lit Prof
“Clang. Clang.” Whether it was the ominous sound of prison doors closing or the repeated raps of a judicial gavel, that brief, signature tone ushered viewers into NBC’s Law & Order from its first episode in 1990. That sound became synonymous with the series itself — its crisp finality (un)comfortably yoked to a purposeful ambiguity. Formulaic, yet realistic; gritty, yet highly commercial; tabloid, yet earnest. This tension between the expected and the unconventional might offer one answer as to how Dick Wolf’s long-running series managed to keep viewers coming back for 20 years and spawned numerous spin-offs.

Within that framework, the episodic formula almost never varied: a crime is discovered; police are brought in to investigate; suspects are arrested, arraigned, and tried; the prosecutors usually win, although the losses are often infused with a moral ambivalence that offers social commentary on the legal system itself. All of this is accomplished within the 60-minute time slot, and viewers can see each episode as an end to itself if they choose. Sounds pretty banal when it’s laid out so systematically — yet, we watched and kept wanting to watch. And will watch every repeat no matter how many times we’ve seen it before. So, I wanted to take my blog entry in the direction of the “why” — Why do I love this series so much? What kept me invested in Jack McCoy after Ben Stone left? In Michael Cutter after years of seeing McCoy do his courtroom best? For me, it always has been the writing. The brilliance of the scripts kept that “ripped from the headlines” tabloid style from going over into parody. Other television series offered gritty backdrops (NYPD Blue, Homicide: Life on the Street); other series had fantastic on-screen talent. But none seemed to have the combination of wit, seriousness, legal conundrums and pathos that marks each episode of Law & Order.

Jerry Orbach and Dennis Farina stand out as actors whose roles offered the most scope for raillery — but never taking it beyond that realm of believability. Lennie Briscoe’s constant punning — particularly at the crime scene — offered a critical respite from the intense earnestness of the series in a way that gave viewers a connection to these characters. We cared whether Rey Curtis cheated on his wife; we cried when Claire Kincaid died; we cheered Mike Logan when he popped a homophobe; we waited to see which direction Jack McCoy’s unruly eyebrows would raise. The balance of these moments of emotional catharsis with subtle (and, at times, not-so-subtle) humor worked.

It’s an overwhelming task to think about 20 years of episodes and to identify a favorite, but one episode stands out. It’s "American Dream" from Season Four, which aired in 1993. It encapsulates everything that is right about Law & Order: the cleverness, the earnestness, the realism, the fantasy of justice. In one scene, Ben Stone is called “Ben” by the serial killer Phillip Swann that Stone is prosecuting. He offers in a characteristically deadpan tone, “In polite society, you don’t call people by their first name unless they ask you to — I didn't do that.” For some reason, that line stayed with me. I know now that, for me, that line symbolizes the show itself — always struggling to show “polite society” in its aspirations (the idealization of justice) while always revealing that very society’s failures. And that duality will keep me (and I hope you) coming back.

With little fanfare, Law & Order's last episode aired May 24, 2010. Had it been renewed, it would have made television history by surpassing Gunsmoke as television's longest running dramatic series. But, as I hope I’ve shown, Law & Order made its own kind of history. So, even though it has passed into the realm of cancelled shows, Law & Order remains one of television’s great gems.

Comments:
L&O was never a show I sat down to watch, but during my extended periods of hospitalization and my imprisonment in my bid, I've grown quite attached to the reruns. With all the cast changes though, I do have my favorites. You really need Jerry Orbach, S. Epatha Merkerson, Sam Waterston, Steven Hill and any othr cop and ADA for me to especially enjoy it.

This was my all-time favorite TV show, ever. It'd been part of my life for 14 years! The writing, the cast and the premise of the show about the idea of justice and fairness are what kept me watching.

Very sad to see it go. Very happy that some seasons are still up as reruns on cable.