"I am a most strange and extraordinary person" 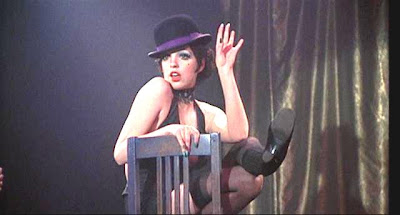 By Michael W. Phillips Jr.
Christopher Isherwood's Sally Bowles, first seen in an eponymous 1937 novella, has been around (if you know what I mean) for 75 years in a variety of media, perpetually on the lookout for a chance to become a star. A young British girl looking for fame and fortune in Berlin in the waning days of the Weimar Republic, just before the rise of the Nazi Party, Sally found her way to the stage with John Van Druten's 1951 play I Am a Camera, then to Broadway with John Kander and Fred Ebb's 1966 musical Cabaret, and finally to the screen with Bob Fosse's film, which turns 40 today. A bewildering array of actresses have inhabited her along the way, I'm sure to varying degrees of success: Julie Harris, Natasha Richardson, Jennifer Jason Leigh, Gina Gershon, Debbie Gibson, Teri Hatcher, Molly Ringwald, Brooke Shields, Lea Thompson, Judi Dench, Jane Horrocks. But perhaps to most people, Sally Bowles is Liza Minnelli and Liza Minnelli is Sally Bowles. Sally got her most memorable actress and Liza got an Oscar.

This wasn't Minnelli's first brush with the material: Darcie Denkert, in her lavish 2005 book A Fine Romance, tells us that Kander and Ebb had wanted Minnelli for the stage back in 1966, but director Harold Prince thought she was too young, too American, and too good a singer to play the young, British, barely talented denizen of the Berlin nightlife. In a way Prince was right: Minnelli is such an astoundingly good singer that Sally's self-confident assurances that she'll make the big time someday don't seem completely groundless. But it's still obvious that Sally won't make it, perhaps for the more subtle reason that her towering talent is unfortunately coupled with an utter lack of judgment, her impetuousness covering a sea of self-doubt. 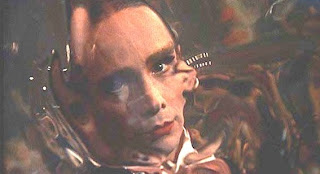 Sally Bowles may be the focus of the film, but the most interesting character is Joel Grey's Emcee, an androgynous, grease-painted sprite with a wicked grin, which Grey originated on stage. Denkert speculates that the Emcee has his roots in a 1930 Thomas Mann novella called Mario and the Magician, about an Italian mesmerist who uses his powers to control his audience. But he reminded me more of another hypnotist, Dr. Woland (Satan in disguise) in Mikhail Bulgakov's The Master and Margarita, who, like the Emcee, seemed less of a fascist cheerleader than a bringer of chaos. The "decadence" of the Weimar Republic is on full display in the Kit Kat Club, and the Emcee gleefully whips his little corner of the world into increasing levels of the very things that the Nazis claimed to be so upset about. This connection is impossible, of course, since Bulgakov's novel wasn't published in English until after the Broadway run started, but I wouldn't be surprised to discover that Joel Grey had it in mind when he transferred his iconic character to the screen.

Because I've never seen or read any of its sources, questions of faithfulness or relative merit are thankfully not ones I can answer. Fosse and screenwriter Jay Presson Allen made several radical changes in transferring the story to the screen, starting with the music. They cut most of the "book" songs from the stage production, removing most of the secondary characters' vehicles for expression of their emotions, pushing them into the background and foregrounding Sally and the Emcee. Now all the songs (with one stunning exception) take place in the cabaret, and only Sally gets a traditional "book" song, wherein the singer gives voice to an inner monologue. This is the new addition "Maybe This Time," which Kander and Ebb had written for Minnelli back in 1963 and which, despite its magnificence, doesn't feel right in the film because Minnelli is unable to restrain her stupendous voice, and the scene starts to feel like she's making a statement about her talent in relation to her famous mother's instead of doing what's necessary for the character. Kander and Ebb wrote several other new songs, and a quick listen to the original cast recording tells me that I generally agree with the subtractions and additions. 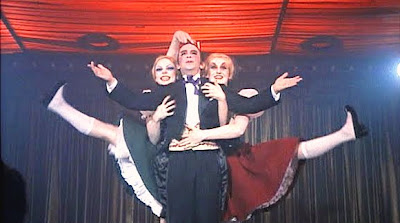 From what I've read, this is less an adaptation than a reconceptualization into something that has roots on Broadway but also looks back to Isherwood's stories and forward into a radical new kind of film musical. It's a thing created from the raw material of the long-running Broadway sensation, but crafted into something that is first and foremost a film. Fosse uses his trademark abrupt editing to do something that would have been impossible on stage: by jarring cross-cutting between the stage and the outside world, he drives home the parallel between the increasing violence and decadence of the Emcee's show and the violence and decadence of the Nazis' rise to power. The boozers and good-time gals who hang out in the Kit Kat Club are there in part to escape reality, but Fosse and editor David Bretherton won't let us forget that the real world is still out there, and it's getting scarier by the measure. Kander and Ebb hated the film at first viewing because it wasn't what they had written, but gradually came to the conclusion that Fosse had created something completely new that was in fact a triumph.

The most triumphant thing for me is how deftly Fosse shrinks and expands the space of the stage. Most adaptations of musicals attempt to shed their "staginess" by setting scenes outdoors or adding new outdoor scenes, and this is no exception. But few, I think, play so adeptly with that staginess. Sometimes the Kit Kat Club seems as big as the Hollywood Bowl, packed to the gills with leering mutton-chopped men and bored women, and the stage seems like it's a tiny thing a mile away. Other times the club feels like it's the size of a telephone booth, and we can almost taste the sour sweat of the patrons and narrowly avoid the swinging limbs of the performers who loom above like giants. Sometimes the stage feels like the whole world. Fosse achieves this through camera placements and movements, use and eschewing of spotlights, and although it's not a perfect technique, it's more often than not a revelation. Much like the film itself: it's not the best musical ever made, and it has its flaws, but it's a wholly original creation that did much to clear away the big-budgeted, uncreative monstrosities that had come to characterize the genre in the late 1960s.

Michael W. Phillips Jr. is a Chicago-based film writer and programmer. He's the webmaster for Goatdog's Movies, and he programs films for the Chicago International Movies & Music Festival and the nonprofit film series South Side Projections.

Comments:
I've never been a fan of the movie and it's all I knew until I saw the magnificent 1998 Broadway revival, which staged it as if it were in a nightclub and stuck to the original book and characters while adding three of the songs from the movie. What you say about Liza's rendition of "Maybe This Time" is quite true, but being lucky enough to see it performed by the late, great Natasha Richardson, it was mesmerizing. Joel Grey was the movie's greatest asset, but Alan Cumming's Emcee was a wonder as well, especially when he gets to sing the haunting "I Don't Care Much." After seeing the revival, I watched the movie again and they are just two different animals, but I prefer the revival by far. I have the OCR, but I never listen to it.