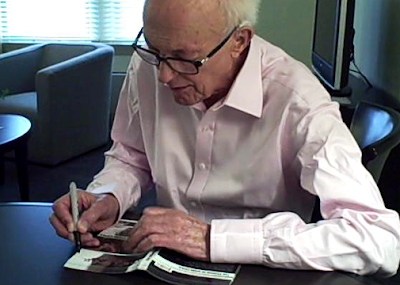 As a director, the Hampshire, England-born Peter Yates embraced a wide range of genres in the stories he brought to the silver screen, running the gamut from police thrillers to science fiction tales, from relationships dramas to beautifully rendered American slices of life, earning four Oscar nominations along the way, two for directing and two for producing. Yates has died at 81.

Though he began his career as an actor, Yates found his greatest fame behind the camera. He started doing second unit and assistant directing work on such notable films as Sons and Lovers, The Entertainer with Laurence Olivier, The Guns of Navarone and The Roman Spring of Mrs. Stone. He made his feature directing debut in 1963 with Summer Holiday, a musical romance starring pop star Cliff Richard. The following year, he turned to comedy with a film called One Way Pendulum.

For much of the mid-1960s, he worked in television, directing episodes of The Saint starring Roger Moore and Secret Agent starring Patrick McGoohan.

He returned to features in 1967 with a dramatization of the Great Train Robbery called Robbery, but it was the film he made in 1968 that made his name: Bullitt. Starring Steve McQueen as a San Francisco cop, Bullitt still contains one of the famous chase scenes in movie history, thanks largely to the hilly environs of its setting.

His next film couldn't have been more of a departure. In John and Mary, Dustin Hoffman and Mia Farrow play two people who meet at a bar, have a one night stand and then spend the next day getting to know one another.

In 1971, he helmed Murphy's War where Peter O'Toole played the title character, the sole survivor of a ship attacked by a German U-boat during World War II who washes up on an island and plots how to take out the U-boat all by himself.

With Robert Redford as his lead, 1972's The Hot Rock took Yates into the heist genre. With a script by William Goldman adapted from a Donald Westlake novel, Redford gathers his crew to steal a big diamond from a museum at the behest of an African doctor who wants it returned to his homeland. The problem: Every time they get it, they keep losing the damn thing and having to steal it again.

Yates filmed a crime classic the following year when Robert Mitchum starred in The Friends of Eddie Coyle. The next year, Yates went in a completely different direction again with the Barbra Streisand comedy For Pete's Sake.

Comedy was still on his plate in 1976 with Mother, Jugs and Speed about the competition between private ambulance companies which brought together the unusual trio of Bill Cosby, Raquel Welch and Harvey Keitel. The next year, he submerged himself with the adaptation of Peter Benchley's thriller The Deep.

His next film though, at least as far as I'm concerned, will be his legacy and remains his best. It brought him those first two Oscar nominations as he filmed Steve Tesich's brilliant script Breaking Away, a film that is as great today as it was the first time I saw it, if not better. He even served as executive producer for the short-lived television series of the movie.

Even though Tesich wrote the screenplay for his next film, Eyewitness, and it starred William Hurt and Sigourney Weaver, the film was a better idea than a movie and bit of a letdown. However, nothing could prepare for his next release, the monumentally silly sci-fi monstrosity Krull in 1983.

Fortunately, he had another 1983 offering to get the taste of Krull out of one's mouth and it earned him those final two Oscar nominations. The Dresser really was an actor's movie (literally) more than anything else as it told the story of an aging and dotty Shakespearean actor (Albert Finney) and his dresser (Tom Courtenay) who more or less serves as his protector. Both Finney and Courtenay were nominated as well.

Following The Dresser, Yates made several films, but nothing to equal those from the early portions of his career. There was Eleni with Kate Nelligan, Suspect with Cher, The House on Carroll Street with Kelly McGillis and Jeff Daniels, the wretched An Innocent Man with Tom Selleck, Year of the Comet, Roommates with Peter Falk and D.B. Sweeney, The Run of the Country with Finney and Curtain Call with James Spader.

His final two projects were made-for-television adaptations of Don Quixote and A Separate Peace.

Even with some dogs on that resume, Yates produced a helluva body of work and an eclectic one at that with several titles that will last for generations.

Comments:
I thought Eleni and Suspect pretty good, if not up there with the better films by Peter Yates. His career seems to parallel that of other directors of his generation, for example John Schlesinger, who was also reduced to being a director for hire. I think for Yates, it was more important to keep working with whatever was made available if one couldn't make more personal projects.

What got me about Suspect was really a script problem more than a directing one with that ridiculous ending about who the killer was.

Peter Yates figures so strongly in my 'movie make-up' -- to the extent that The Dresser made me want to be an actor (I didn't), Bullitt made me want to visit San Francisco (I did), and Krull gave me (aged 15) a place to escape to (also, I did).

Have never seen Breaking Away.
I guess I have somewhere new to wish I was and still to go to.