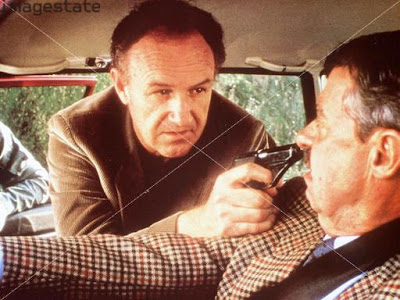 By Edward Copeland
Finally, after having to get discs from two far-flung Netflix shipping facilities, one DVD which turned out to be defective, I've finally been able to see Arthur Penn's Target and complete my journey through his feature films. I'm fairly certain, except for directors who only made one film, this makes Penn the only director with totals in the double digits that I've seen each of their feature films. I think I just lack one Kubrick and one Scorsese, but they are only others who come close. Anyway, that's beside the point. Let's talk about 1985's Target.

Much like Dead of Winter which Penn would make two years later, Target serves more as a pure genre piece than Penn usually made, though this time it's the action thriller. Also like Dead of Winter, it's fairly enjoyable as long as you don't think too hard about the plot. It also marks the third and final time that Penn and Gene Hackman worked together.

Walter Lloyd (Hackman) works at a lumberyard in Texas with his devoted wife Donna (Gayle Hunnicutt) and his estranged son Chris (Matt Dillon). Donna is preparing to go on a tourism package visit to Paris and she asks her men to try to bridge their gaps while she's gone. They will, but in a totally unexpected way. Soon after she's gone, Walter gets a call informing him that Donna has disappeared from the tour group.

We don't start getting the full story until the Lloyd men get to Paris and a man approaches Walter with proof he has his wife but Walter quickly spots a man about to open fire on him and moves the kidnapper in front of him, steals his ID and tells bystanders to get a doctor, the man's had a heart attack. You see, Walter isn't your average lumberyard worker: He's a retired CIA agent and Donna has been kidnapped for some reason by someone who wants to see him which may or may not be related to the people who keep trying to kill him.

Of course, he slowly has to let his son in on the truth of his past life, including the fact that Chris Lloyd is not his real name (He should know that's the actor on Taxi, but surely I jest). Basically, the rest of the film turns into one long combination of a mystery and a chase and Penn moves it along at a brisk pace even if it's pretty obvious early on who the bad guy is if the reason behind the whole affair remains murky.

One thing that is disappointing, and this may be due to the DVD transfer, is that it seems to have come from a very faded, bad print so that the color scheme bears a startling resemblance to old 1970s television series. Given the difficulties I had obtaining a copy of the movie in the first place, I suspect that this is probably the story and it didn't really look this bad in its original 1985 release.

In a way though, it's kind of sad. Though Target turned out fine as did Dead of Winter, Penn was trying so many exciting things when he really launched his film directing career with abandoned in the 1960s, that I feel viewers were robbed of other unmade masterpieces. Perhaps too many disappointments or too much meddling by others led Penn to prefer the theater or like many, he just couldn't get projects off the ground. Whatever the story, it seems as if there should be a longer list of Arthur Penn features than there are.

So, now I have finally completed my Arthur Penn journey. Though I have seen a lot of his films that I hadn't seen before, I still ended up holding the same films of his as my favorites as I did before I became a completist. Ranking the top 4, I'd go in this order: Bonnie and Clyde, Little Big Man, Alice's Restaurant and Four Friends.