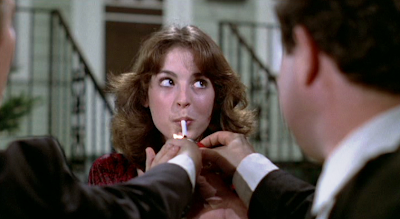 "David, Tom and Danilo were the best of friends and they loved the same girl, Georgia. She lived next door to me on Aberdeen Lane and I loved to watch the boys come to call. They always came together. It kept me young, trying to guess which one she would choose." — Mrs. Zoldos

By Edward Copeland
When I began this blog many years ago, I swore that some day I would get around to writing about Four Friends. It's just a shame that it took Arthur Penn's death to finally get me to do it. Ever since I first saw the movie in high school, it's held a special place in my heart and seeing it again revived that feeling. My regret is that I probably won't have the time to give the film the detailed tribute I've long felt it deserved.

This semi-autobiographical screenplay by Steve Tesich, who won an Oscar for his brilliant script for the great Breaking Away, returns his characters to Indiana, only instead of Bloomington, this time it's East Chicago and the main character Danilo comes to the U.S. with his mother as a child to join his father who arrived first from their native Yugoslavia.

Fast-forward to 1961 and Danilo, now tending to go by Danny (Craig Wasson) is a senior in high school about to graduate with his three best friends: Tom (Jim Metzler), David (Michael Huddleston) and Georgia (Jodi Thelen), the planet the three young men orbit around. Georgia is a life force, convinced that when Isadora Duncan died, her soul transferred to her body. Don't bother her with the fact that Duncan died 15 years before she was born: Her soul just hung out in limbo until baby Georgia arrived in the universe. 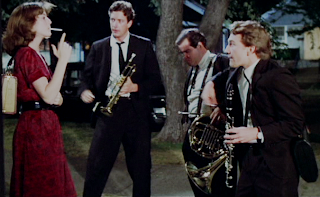 All four friends belong to the Roosevelt High band. Georgia causes a bit of a stir on the night of the senior concert as the music gets to her and she continues playing as she rises out of her chair, flabbergasting the conductor who berates her after the concert ends. "These middle-class minds," she tells her male buddies, "they don't know what passion is." Their musical prowess also provides one of Penn's earliest and best sequences as Danny wanders the streets playing the clarinet until he gets to the railroad tracks where a train is running and his sound soon gets complemented by Tom and David playing on the other side. Once the train clears, the three friends continue playing through the streets on the way to Georgia's house, serenading her with "Georgia on My Mind" and then all three rushing to be the one who gets to light her cigarette.

Danny and Georgia are the two of the friends most determined to get out of East Chicago, though Georgia's exit seems iffy at first. Tom doesn't seem to care, though he does get out of town by way of service in Vietnam. David wants to avoid following his father into the mortuary business, but he sells out for the price of a nice car. Danny succeeds though, heading off to college with dreams of being a writer and a scholar, something that doesn't sit well with his hard-working, blue-collar immigrant father (Miklos Simon) who tells his son that he makes fun of his life with his dreams. 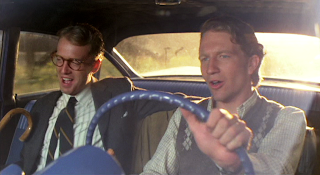 As much as Four Friends means to me and as much as I enjoy it each time I see it, I do have to admit its flaws each time. It seems as if it were either meant to be a novel or that a lot of things were left on the cutting room floor. There may be four friends, but it's really only two who get any development. In fact, Danny's college roommate Louie (the very good Reed Birney), who suffers from some unnamed terminal disease but keeps persevering through life anyway dreaming about space exploration ("When stars collide, it's out of loneliness," he tells Danny), gets as much development and screentime if not more than either Tom or David, especially when his sister Adrienne (Julia Murray) becomes Danny's romantic interest and fiancee. Really, only two friends, Danny and Georgia, count, and it's ultimately Danny's story.

In fact, since the film covers 1961-1969, it does touch on most of the major touchstones of the decade— JFK, the Civil Rights Movement, Vietnam, the moon landing — but for the most part, the events occur on the periphery of the characters' lives. It's not as if Tesich's screenplay tries to march his characters through the 1960s greatest (or worst) hits. They're just window dressing for telling the story of the people and how people grow apart as they grow old and depicts those strange moments when your high school friends intermingle with friends you made in college.

Arthur Penn who so wonderfully captured the era in 1969 with Alice's Restaurant does it again in Four Friends, but grounds it more in a character piece and realism. One of his best sequences comes when Danny, whose life has taken a tragic turn, ends up in a traditional Pennsylvania community and that community's picnic contrasts with a whacked-out New York party that Georgia finds herself at. After the NY bash goes horribly awry, she finds her way to Danny again, finally collapsing in his arms and declaring, "I'm so tired of being young."

Jodi Thelen plays Georgia so well I have to wonder if this were a once-in-a-lifetime role for her. Later, she played the kooky sister on the early Fox comedy Duet and I've spotted in her in an occasional commercial and her IMDb credits are active and full, but she's such a powerhouse here that it boggles my mind that she didn't parlay her Georgia into a great career. If there were justice in Hollywood, she would have. Then again, more people would have heard of Four Friends as well, so you know how that goes.

Some films have an amazing ability to make you feel nostalgic even when the era being depicted isn't your own, but that's because the nostalgia Four Friends engenders is a universal one of friendship and where and when it takes place is irrelevant as long as it's told truthfully.

Comments:
Four Friends was a wonderful movie that has not faded with age. I first saw it with some Serbian-American first generation friends to whom Danny's story had particular currency. Later came Forest Gump and his life amongst the 60's; this movie's story of life during the 60's has a similar appeal. Thanks for bringing this little gem of a movie back to everyone's attention.
Dale Matt (dalermatt@gmail.com Twitter: @lisztnut)

Thanks for this. Four Friends is one of my favorite movies as well. I grew up in that era, and the movie spoke to me -- perhaps because I knew people that approximated both Georgia and Danilo; it was like old home week.

I really liked this one as well. I'm glad it's getting some props.