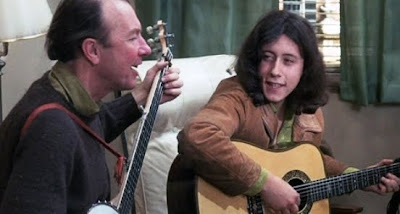 By Edward Copeland
Since I began my journey through Arthur Penn's filmography following his passing last week, 1969's Alice's Restaurant marks the first film I've written about that I have seen before. I just felt like seeing it again and it's just as good as I remembered.

Taking Arlo Guthrie's epic folk hit as its inspiration (and a major portion of its story), Alice's Restaurant earned Penn his third Oscar nomination as best director. He also co-wrote the screenplay with Venable Herndon. It even starred Guthrie as himself. Penn's followup film to Bonnie and Clyde couldn't be any more different than that landmark effort, but it's another great work, a freeform film that encapsulates the waxing and waning of the counterculture lifestyle of the late 1960s..

Guthrie isn't an actor by any means, but he doesn't need to be. His gifts as a musical performer provide more than enough charisma. The nature of Alice's Restaurant isn't one that really requires acting, so Guthrie slipping into character isn't warranted or needed. However, he does possess a natural screen presence. He's wide-eyed and fresh-faced with an innate wit and an inner grin most of the time that provides the perfect vehicle for leading the viewer through this aimless but ultimately poignant and purposeful journey.

As the film begins, Arlo's doing his best to avoid the Vietnam draft. He tries to use the possibility he could develop the hereditary condition Huntington's disease that is killing his father, the famous Woody Guthrie (played by Joseph Boley), in a New York hospital, but the Army isn't buying it, so he enrolls in college in hopes of a deferment. Unfortunately, his long, curly hair doesn't wear well with the college atmosphere and, as usual, "schools seem to have a habit of dropping out around him" and Arlo "seems to have this habit of getting arrested" after a brawl at a pizza parlor.

He decides to head east to visit his ailing father and runs into old friends Alice and Ray (Pat Quinn, James Broderick), who have purchased an old church in Stockbridge, Mass., and converted it into a pseudo-commune for their young hippie friends. Soon, Alice also opens an eatery in the town called The Back Room which inspires Arlo's song which starts life as a radio jingle: "You can get anything you want at Alice's restaurant...except for Alice."

The film is essentially plotless, blending fiction and fact, but Penn makes it flow almost effortlessly, thanks in no small part to the crisp, masterful cutting by the late great film editor Dede Allen, who first worked with Penn on Bonnie and Clyde and went on to edit most of the major films for the rest of Penn's career. It also shows Penn getting a handle on Americanizing the French New Wave stylistics he tried but failed to pull off in the little-seen Mickey One.

Anyone familiar with Guthrie's epic single will recognize some of the movie, but it's still a blast to see them visualized, especially the garbage dump and its aftermath when the Army first finds Arlo to be an exceptional candidate as a killer but then thinks his legal troubles make him morally unfit to kill. Even more fun, since I had forgotten this, a fast-talking Army sergeant in this section is played by M. Emmet Walsh.

The film contains some really wonderful sequences such as when the camera slowly moves into the church's worship area where the kids are singing a beautiful version of "Amazing Grace" that stands in stark contrast to an earlier scene when Arlo sees the gullible stumble through the same song at a roadside evangelist tentshow revival. Another wonderfully shot and edited piece involves an argument in the darkened church where the only light comes from black-and-white images of a home movie of a motorbike race projected on the wall.

It's also bountiful when it comes to music. Not enough to make it a full-fledged musical, but just enough to capture the background soundtrack of its time, including a wonderful moment when the real Pete Seeger plays at the bedside of the incapacitated Woody Guthrie and ends up in an impromptu duet with Arlo when he shows up to visit his father.

Re-watching it again after having not seen it for several years, what struck me is how it paints such an infinitely more interesting reflection of the time and place than the other 1969 film that's always cited as representative of the counterculture zeitgeist of the time, Easy Rider. When you compare the two films, it is not a contest, at least for me. I've always found Easy Rider to be tremendously overrated and more concerned with trying to show the audience at times what a "trip" feels like, pushing the psychedelia too hard. Alice's Restaurant depicts the lifestyle, for all its highs and lows, as even those caught up in the movement see the wavering of the idealism beginning.

The best comparison between the two films is how each treat death. Easy Rider's downbeat ending contrasts with the sad, but evocative spirit of the passings in Alice's Restaurant. More importantly, in Alice, they don't mark the end of the movie, though the finale is admittedly melancholy.

After what should be a celebratory event, Ray gets another idea to keep his youthful dreams alive (it is notable that he has quite a few years of age on most of the young people he hangs with) and it seems to depress Alice further. As Arlo and the others leave for elsewhere, Alice stands almost perfectly still outside the church and Penn's camera holds her in a medium shot while it slowly pans from right to left allowing all objects, mainly trees, to block our view as her position seems to stand firm. It's both lovely and sad, much like the movie and the time period itself.