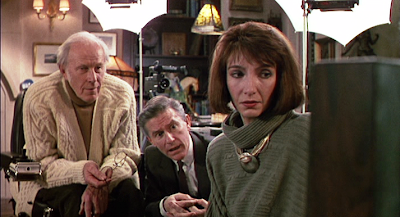 By Edward Copeland
With 1987's thriller Dead of Winter, Arthur Penn throws himself into a straight-on genre piece. True, Penn ventured close to the detective film with Night Moves and made three Westerns, with his first feature The Left-Handed Gun coming closest to a typical example of the genre, but Penn always added unique touches that differentiated his films from others in those areas. This isn't the case with Dead of Winter, which plays pretty strictly by the rules of a thriller and Penn still delivers the suspenseful goods.

Dead of Winter gets off to a suitably creepy start as a trenchcoated woman, further hidden beneath a large hat, does some mysterious business at row of public lockers, removing a key from one and unlocking another and removing a satchel full of cash. She drives her car, though the weather is bad and she's missing a headlight. It catches the attention of an officer at a traffic stop, but he lets her proceed anyway. The woman stops by a phone booth in a parking lot and makes a call, telling the person on the other end that if they aren't there in five minutes, she's leaving. She returns to her car and sees a man's face in the rearview mirror and screams as he begins to strangle her.

It won't be clear for quite some time what this has to do with the rest of the movie, but it's a helluva opening. From there, we move to the crowded apartment of out-of-work actress Katie McGovern (Mary Steenburgen), her husband Rob Sweeney (William Russ), who currently is coping with a leg in a cast, and her brother Roland (Mark Malone, who co-wrote the screenplay with Marc Shmuger). An ad catches her eye for an open audition for a SAG actress for a movie and she decides to give it a shot.

Taking the resumes and interviewing the actresses is one Mr. Murray (Roddy McDowall), who about goes out of his mind when he sees Steenburgen. He asks her to pull up her hair and show her profile and he pretty much offers her the part on the spot. Of course, just about any thriller of this type will have holes you can drive large trucks through and I have to admit that this movie begins with a hole you could sail an aircraft carrier through sideways. That Mr. Murray should be fortunate enough to have Katie show up, since she's a dead ringer for the woman his boss desperately needs a lookalike for, that's damn good luck for him, but let it go and enjoy the ride.

Ecstatic at the chance for employment for the first time in ages, Katie agrees to let Mr. Murray drive her to an upstate New York mansion of a friend of his to tape a screen test for the director. The long drive happens to come in the middle of a nasty blizzard, though when they do stop for gas, they spend more than $10, so they qualify for the station's odd gimmick of free goldfish.

When they arrive at the mansion, they meet the owner, Dr. Lewis (Jan Rubes, light years removed from his role as the Amish patriarch in Witness), who uses a wheelchair and explains the full story to Katie. It seems the film's star had a nervous breakdown and left the set and the director has been shooting around her, but they've been searching for someone who could pass for her for the remainder of the film that needed to be done. Could this missing actress be the apparent murder victim from the film's opening? It doesn't take long for Katie to discover the lies and get suspicious about her host's motives.

To go into much more detail, would ruin the film's twists, though it's fairly easy to figure out that there is no movie being made and Katie has become a prisoner of these two men who are involved in a deadly game with her doppleganger's sister. However, Penn keeps the suspense building and with the wonderful actors at his disposal and even more so the wonderful production design of Bill Brodie with art direction by Alicia Keywan and set decoration by Mark S. Freeborn.

McDowall, who two years earlier turned in such a great turn as Peter Vincent, vampire killer, in Fright Night, scores again here as Dr. Lewis' equivalent of Renfield, only instead of being mad and eating bugs, he's a villain who's exceedingly polite to his prisoner, making him even more frightening.

Steenburgen actually gets to have a blast, though I can't explain why without ruining things. Just let it stand that she just gets better the longer the film goes on and both Steenburgen and Katie get to show off their acting skills.

Dead of Winter really bears no resemblance to most of the films you find in Arthur Penn's filmography, but it's suspenseful fun, even if Richard Einhorn's score does hit its notes a bit too hard at times.