BLOGGER'S NOTE: With this week's passing of Arthur Penn, I thought I'd try to do a mini-festival, seeing films of his I never have and revisiting ones I haven't seen in a long time. 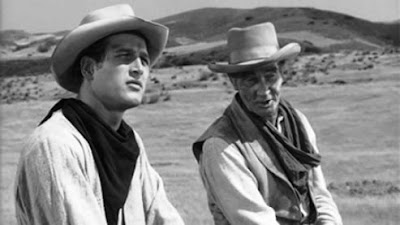 By Edward Copeland
Arthur Penn made it known that he wasn't unhappy with what the studio did with his first feature directing effort, 1958's The Left Handed Gun. The experience left such a bad taste in his mouth that he didn't make another film until 1962, but his first effort, while hardly a great film near the level of his subsequent works, still deserves a look and has some nice, unusual touches.

Adapted from a Gore Vidal play for television, The Left Handed Gun puts Paul Newman in one of his earliest starring roles as Billy the Kid, the infamous, oft-portrayed outlaw of the Old West. Of course, every version of his story seems to have a different take on Billy. Was he a cold-hearted killer like those old Time-Life books in the 1970s used to portray in their TV ads? ("He was so mean he once shot a man just for snoring!" Wait: That was John Wesley Hardin.)) Was the truth more complicated and he was a kid with a taste for vengeance that got out of hand? That's the version The Left Handed Gun takes on William Bonney.

We meet Bonney in the movie wandering across the plains carrying his pack and a saddle when he meets some cattlemen led by an English gentleman named Tunstall (Colin Keith-Johnston), who decides to hire him on, despite misgivings by others on his team. One of Tunstall's men even relays that he'd heard tales of an 11-year-old in El Paso with Billy's name who stabbed a man to death. Tunstall says Billy stays until he gives them a reason not to trust him.

Unfortunately, a rival cattleman who doesn't like "The Englishman" and is in cahoots with the local sheriff murders Tunstall while he's out riding with Billy. Billy, with the aid of two Tunstall's men (James Congdon, James Best) ambush two of the killers and are determined to finish the job on the remaining two. Pat Garrett (John Dehner) helps convince the New Mexico territorial governor to offer both sides amnesty in order to stop the killing, but Billy can't help himself and gets egged on by the other side and the amnesty is soon broken and Garrett agrees to be sheriff and stop Billy himself.

Newman to me was an actor who got better the older he got and since this was one of his earliest performances, it's very uneven at times. He can be intense or fun-loving, but the way those sides are played they seem inconsistent within the same character. The story itself, needless to say, has a much different take on Billy and Garrett than Sam Peckinpah did in 1973's Pat Garrett and Billy the Kid.

One interesting aspect that foretells Bonnie and Clyde and countless other films is the character Moultrie played by Hurd Hatfield, who makes a living selling memorabilia on gunfighters including books that spring up on Billy and first meets Billy when he shows him a false newspaper report of Bonney's demise. While Moultrie's not a writer like Saul Rubinek's character in Clint Eastwood's Unforgiven, both characters even wear similar bowlers. (I always thought it was no accident that Billy's real name was William Bonney while Eastwood's character in Unforgiven was named William Munny, as if perhaps Billy had lived and aged.)

When Hatfield's character runs into a desperate Billy late in the film, he even exclaims to him that he's not like he is in the book and asks where his glory is. It leads to a nice shot because Hatfield is cowering on the street at the time and when he rises and gets up, it reveals Garrett and his party in the distance behind him.

Despite his complaints about the finished product, Penn has many nice moments like that such as when the camera closes in on Garrett and his wife when they are discussing a judge's sentence that Billy should be hanged. There's also a brief moment of dark humor that you wouldn't expect in this type of film in 1958. When Billy escapes from custody and kills a deputy in the street, a little girl comes out and laughs because one of the deputy's boots remains standing upright while his corpse lies sprawled beside it.

Penn would certainly go on to make much greater films, but The Left Handed Gun is hardly an embarrassment for a directing debut.

Comments:
RIP Arthur Penn, a maverick if there ever was one.

We're linking to your article for Arthur Penn Friday at SeminalCinemaOutfit.com

Keep up the good work!