Three strikes and you're out 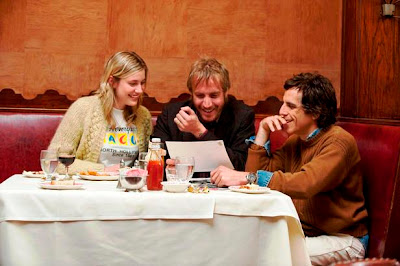 By Edward Copeland
Think how much money could be saved the next time Noah Baumbach seeks financing for a film if instead of someone ponying up for a full-scale production, they simplify the process by simply giving him a cameraman and filming his sessions with his psychiatrist. Better yet: Don't actually film them and spare viewers from having to endure Baumbach working through his issues.

Many artists have worked through their neuroses in their art and done so in astoundingly great works of film, literature, theater and television. While Baumbach has been at it a while and I admit I haven't seen his earlier directing efforts, his last three films do so in such an overt way with such annoying and downright unlikable characters that you wish you could enter the film and slap the whole fucking lot of them.

With The Squid and the Whale, the ensemble of Jeff Daniels, Laura Linney, Jesse Eisenberg and even young Owen Kline were so good that their performances managed to overcome the script's deficiencies and make the experience of watching the film less painful than it might otherwise have been.

Then came Margot at the Wedding, which I would call insufferable if I weren't afraid it could come off as high praise for such a miserable waste of film.

Ben Stiller stars as Roger Greenberg, recently released from a mental hospital in New York, who travels to Los Angeles to housesit for his brother while he and his wife take a trip to Vietnam. This brings Roger in contact with his brother's assistant Florence (Greta Gerwig), the only character in the film that doesn't come off at some point as an asshole.

I do have praise for one scene. When Roger decides to throw a party that somehow attracts throngs of twentysomethings, he launches into a coke-fueled speech about their generation that I do have to admit was quite funny. It was Stiller's best moment as well as the movie's. Also, I'll give Greenberg this much: It's not as painful as Margot at the Wedding was, where I dreamed of a Dynasty-style terrorist massacre to take out the entire wedding party.

I could delve further into the machinations of the story of Greenberg, but it's honestly not worth the effort. Once I finished the torture of watching the film, I would have ejected the DVD, but out of habit I checked to see what bonus features were offered. One was titled "Greenberg: A Novel Approach." In it, Baumbach, obviously suffering from delusions of grandeur, said he hoped to make a movie similar to a novel that would have been written by a Philip Roth or John Updike or Saul Bellow.

Of course, the only thing Greenberg has in common with those writing greats is that their books and Baumbach's screenplay were printed in English. To make the extra more ridiculous (before I shut it off) others involved in the film tried to compare it to classic films of the 1970s, such as something Hal Ashby might have made.

So, it's going to take a lot of convincing to get me to watch the next Noah Baumbach-directed project. I'll be nice and go easy on movies he only participates in the writing of, even though I've only liked one of those, Fantastic Mr. Fox. Next time Noah, maybe you should let your wife do the heavy lifting.

Comments:
So you find Baumbach's characters unlikable, nay, insufferable? Me, too. I still like (most of) his movies. Fine if you wanna leave it at that, but this is a pretty weak (if entertaining) attack.

The only one I've seen that you haven't is Kicking and Screaming, which is angsty in different, more universal ways, I think (plus: Jimmie Dale Gilmore). Squid and the Whale's probably better (like you said, that cast does great things), but Kicking's my favorite. And Margot is too claustrophobic for me to consider revisiting for at least a decade.