He's got the world on a string 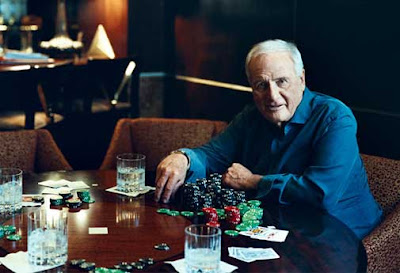 By Edward Copeland
To be perfectly honest, if you asked the average person or even some fairly knowledgeable film buffs what exactly it is that a producer does, they wouldn't be able to give an adequate definition, especially when the list and types on some movies and TV shows has grown so long. Watching Douglas McGrath's highly entertaining documentary His Way about Jerry Weintraub and his rise in the entertainment industry won't necessarily give you a better idea of a producer's role, because Weintraub's portrait as a one-of-a-kind self-made man amazes on a professional level and his private life will make your jaw drop in disbelief at the charmed and unorthodox life he lives.

His Way, which premiered Monday night on HBO, opens with quick shots of some of the luxury items Weintraub surrounds himself with, many emblazoned with the monogram JW while Sinatra sings, "I've Got the World on a String." Then a series of famous figures, including most of the major stars of the Ocean's 11 remake and its sequels which Weintraub produced, as well as others, try to describe Weintraub in a few words. Among those quotes:

Out of high school, Weintraub entered the Air Force, serving in Alaska, where his drive for success led him to get the midnight to 8 a.m. shift so during the day he could go into Fairbanks and work at a Woolworth's where his ingenuity eventually got him promoted to manager.

He had an early failed marriage to a high school sweetheart, but moved back to his native New York where he started his climb in the entertainment industry, beginning as an NBC page, then to the fabled William Morris mailroom and before moving on to the television division of MCA before transferring to its night clubs division. Eventually, he left to manage talent on his own, taking about any act and providing one of the main inspirations for the title character in Woody Allen's Broadway Danny Rose, which makes writer-director McGrath's involvement somewhat ironic since he co-wrote Bullets Over Broadway with Allen.

Weintraub's constant pursuit of more talent to manage led him to the well-known (in certain circles) singer Jean Morgan. Much of her success she gained in Europe, but she'd been performing since she was a child, including in Kennebunkport, Maine, which is how the elder Bushes came to know Weintraub. Weintraub not only became her manager, he also wooed her away from her husband and remains married to her to this date, but to say it's a conventional marriage would not be truthful, but more on that later.

As his acts grew, Weintraub decided he wanted to promote a tour of Elvis Presley. After a year of calling Col. Tom Parker every day and being rejected, Parker changed his tune one day and told Weintraub to show up in Vegas with a check for $1 million and they'd talk. With much scrambling, Weintraub managed to get a cashier's check for $1 million by promising a radio exec he knew that he'd give him half of his concert proceeds for all acts. So Weintraub set up a tour for Elvis, with Weintraub getting 50% of the profits and the Colonel and Elvis getting the other half. Elvis had only two demands: No empty seats and only fans in the front rows, no big shots. When his show sold out so fast in Miami Beach, Weintraub proposed adding a matinee, and Elvis said yes and the venue manager told him it was sold out.

However, when Weintraub arrived, there were all these rows of tickets for the matinee. He asked the venue manager why he lied and he said he told him what he wanted to hear. Weintraub told Parker they had a problem, but the Colonel corrected him that they didn't, he did. In a stroke of genius, Weintraub got the officials at the neighboring Dade County prison to have inmates move the empty 5,000 seats into the parking lot for the matinee and cover them with a tarp and put them back for the evening show. Elvis never said they had to sell out, he just didn't want any empty seats, though later he said they should rethink the matinees because the crowd wasn't as loud and excited as the one at night.

After the evening performance, Parker took Weintraub into a room with two locked briefcases. He unlocked them both which were filled with cash which the Colonel said were from the concessions. Weintraub said that didn't belong to him, but Parker insisted and after making an even pile of cash on a table, used his cane to divide it equally saying that half was Weintraub's. After that, Weintraub was a multimillionaire. It boosted his reputation to the point that Frank Sinatra came calling, saying he'd grown bored with what he was doing and he wanted Jerry to do for him what he did for Elvis.

Weintraub's stable of big music talent grew to include Bob Dylan, Led Zeppelin, Neil Diamond, The Carpenters and John Denver, but as successful as he was with the music management business, he always wanted to make movies. One day, Robert Altman met with him, wanting Weintraub to manage him, but Weintraub surprised him by saying he didn't want to manage him, he wanted to produce his next movie and he did. That movie was Nashville.

Other films Weintraub produced include Oh, God!, Cruising, All Night Long, The Karate Kid and, as mentioned, Ocean's 11, 12 and 13 (those films' director, Steven Soderbergh, is both an interview subject in and an executive producer of His Way). One of his biggest hassles came when he made Barry Levinson's Diner for troubled studio chief David Begelman. Weintraub warned him not to call during the screening, knowing that it had been turned down by all the studios in town, and within seconds of it ending, the phone began ringing. Weintraub ignored it, went to the projection booth and took the print.

He then arranged a special screening for Pauline Kael (after the studio had done a test screening in Phoenix, which obviously was the wrong audience) who loved it and penned a rave. Weintraub took the review back to Begelman and his minions and showed them Kael's review that she planned to run whether they released the film or not, so it was up to them if they wanted to look like idiots or not. Diner was saved.

The one misstep that Weintraub has seemed to have made in his career was when he opened his own independent film studio, the Weintraub Entertainment Group, but his skills weren't suited to be an executive and the company ended up losing him $30 million.

The most iconoclastic aspect about Weintraub actually concerns his family life. Throughout his life, Weintraub has been nothing if not honest. He tells the story of a good-looking young woman who walked into his office one day and told him she wanted to have sex with him. Jean was out of town, so Jerry took the young lady home when Jean unexpectedly showed up. He tried to keep her out of the bedroom, but she figured out what was going on. He tried to call Jean for hours and when she did talk to him, he offered her a divorce, half of everything, whatever she wanted. Jean made a different offer. She didn't want a divorce. She just asked him to open an account for her and deposit $1 million in it. From then on, he could sleep with any bimbo he wanted, but each time, she'd get $1 million.

That's not the strangest part. Later, while making the film Pure Country, Weintraub met a woman named Susie Elkins and they fell in love. Again, Jane didn't feel the need for a divorce and in fact, she and Susie have become good friends and the three can often be seen together. Weintraub's daughter Julie says that it's other people who are more uncomfortable with the unusual situation than they are, and most of the interview subjects seem to back that up such as Barbara Bush who says she'd have killed George if he had ever tried to pull something like that on her.

As George Clooney says, Jerry Weintraub may be 72, but everything about him acts as if he's 15. Brad Pitt closes by guessing, "I'm sure he has his funeral arranged and it will be a great show."