14 months after Katrina (in Treme time)

By Edward Copeland
New Orleans Police Lt. Terry Colson (David Morse) told civil rights attorney Toni Bernette (Melissa Leo) in the fifth episode of Treme that morale in his department had fallen precipitously and crime was getting ready to come back in a big way and the city wasn't prepared. Morse's character was only recurring in the first season, but he's been bumped up to a regular for season two, which premieres Sunday night on HBO, and it appears, based on the first three episodes of the second season, Colson's prediction about a steep rise in crime have come true. However, if you were a fan of the first season of Treme, have no fear that the series has undergone a sudden transformation in its second season into a police procedural: It remains one of the most unusual dramas on the air today with a rhythm wholly its own and music — lots and lots of music. Treme, at least from what I've seen of the second season so far, continues to follow the beat of its own very unique drummer.

Co-creators David Simon and Eric Overmyer set the first season of Treme three months after Hurricane Katrina ravaged New Orleans. A title card informs viewers that we begin season two on Nov. 1, 2006, All Saints Day, 14 months after Katrina, though in terms of the characters' lifespans, only seven months have passed since the first season ended. In the three episodes I've seen so far, Overmyer wrote the premiere (and shares story credit with none other than Food Network star Anthony Bourdain), and Simon writes the second episode, which is directed by Tim Robbins. All the main characters remain pretty much where we last saw them. 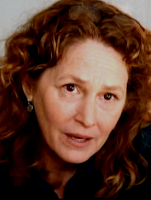 Toni Bernette (Leo) perseveres with her legal practice devoted to the underdog while adapting to the new role of single mom to 16-year-old Sofia (India Ennenga, who has been promoted to the opening credits) following the suicide of husband Creighton (the much-missed John Goodman). If Toni has had difficulty adjusting to being a widow, she hides it well, though at vulnerable moments she'll break. Sofia, on the other hand, definitely has changed since her dad's death, even taking on his role as New Orleans' resident YouTube ranter. While Toni gets an assistant (LaToya Luckett) and attempts to lighten her caseload, her concerns about Sofia's moods and attitudes do seem to be weighing on her. Leo, whom I've loved since her work as Kay Howard on NBC's Homicide: Life on the Street, really has had a chance to show her range and shine in the past few months, winning an Oscar for The Fighter and providing fine support as Kate Winslet's best friend Lucy in the recent Mildred Pierce miniseries, also on HBO. To see her so soon after those roles back as Toni truly shows what a talent Leo is.

When I covered the first season of Treme, I said that I meant this as no slight to the male actors on the show and I still mean it as I write it again now when I say there were three MVPs among the cast of the first season and they were all women: Leo, Khandi Alexander as LaDonna Batiste-Williams and Kim Dickens as Janette Desautel. In fact, the actresses were so good, as was the series, that none of them received Emmy 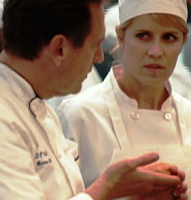 nominations. Then again, now that Treme features an Oscar winner as a regular in Leo perhaps that will change next time (or that will mean they will only recognize her name). I digress. Back to LaDonna and Janette. In season two, both characters remain basically in the places we left them. LaDonna finally has convinced her aging mother (Venida Evans) to abandon New Orleans and live with the family in Baton Rouge, the ammunition LaDonna's husband Larry (Lance E. Nichols) believes he needs to get LaDonna to close Gigi's and stop her commute to run the New Orleans bar, but LaDonna finds herself resisting the idea. After having to finally close her well-received but money-losing restaurant, Janette has staked out a life for herself in New York "with the big boys" of the culinary world as she said she would, working as one of many chefs in the high-class Manhattan eatery of master chef Enrico Brulard (Victor Slezak) who is half tyrant/half lunatic.

Janette's on again/off again ex, Davis McAlary (Steve Zahn), the one-time political candidate and sometime musician has, against all odds, been able to hold on to the disc jockey job he got back at the radio station, though he still pisses management off with his record selection. Even more amazingly, a relationship has developed and continued between Davis and former street violinist Annie (Lucia Micarelli). With the approach of Thanksgiving, Annie wants to know if Davis will take her home to meet the white sheep of his family, but he's hesitant, since the only time he took a woman home, she left the state (she being Janette). Annie's ex, Sonny (Michiel Huisman), who contributed to the weakest storyline of the first season, keeps struggling with his music on the sidewalks of the French Quarter while various druggies use his apartment as a place not only to shoot up and get high but to deal as well. 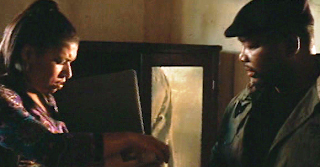 LaDonna's ex, trombonist Antoine Batiste (Wendell Pierce), continues to float from irregular gig to irregular gig while his common-law wife Desiree (Phyllis Montana-LeBlanc) basically supports them and their infant daughter on her meager schoolteacher's pay as the school system barely gets up and running again following years of infighting and corruption that occurred long before Katrina struck the city. During one jam session, Antoine actually puts down his horn and takes to the microphone for some vocals and finds he likes it and begins to get the idea that he should stop trying to find places to plug himself in but should form his own band. Desiree's preference continues to lean toward Antoine getting a regular paying job. One thing I learned since season one that I didn't realize is that Montana-LeBlanc, who always looked familiar to me, is a published author about the Katrina experience who appeared in both of Spike Lee's documentaries about the aftermath of the storm: When the Levees Broke: A Requiem in Four Acts and If God Is Willing and Da Creek Don't Rise.

Albert Lambreaux (Clarke Peters) continues to work odd jobs but his friends and son Delmond (Rob Brown) and daughter Davinna (Edwina Findley) notice a distinct disinterest in the Indian chief in planning any tribal activities as he did when he first returned to New Orleans after the storm following a sudden, forced relocation and continued battles with insurance companies. He doesn't seem to be the same Albert Lambreaux who was willing to take on the city and the federal government over the closed housing projects which received next-to-no damage from Hurricane Katrina yet former occupants were barred from returning to the apartments. It's not that he's bowing down now, it just seems he isn't interested in standing up like he once was and his children are concerned. Meanwhile, Delmond finds himself dissatisfied with the promotion and sales of his latest jazz CD and, unbelievably, a defender of New Orleans to those elsewhere who put it down. Delmond also continues his practice of juggling different girlfriends in different cities. 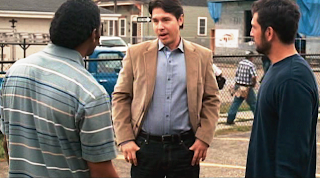 Season two introduces one new regular who does raise concerns on my part, simply because of my general distaste for the actor. If you remember the character of Arnie (Jeffrey Carisalez), the bouncer who followed Sonny back from a gig in Houston, ended up as a roof contractor, fixed LaDonna's saloon's roof and took the crooked contractor who was ripping her off's business, he welcomes his cousin by marriage Nelson Hildago (played by Jon Seda, the actor who helped to ruin Homicide: Life on the Street). Hidalgo comes to the Big Easy hoping the easy refers to money, planning to set up big contracts through business and political contacts so he can get rich. At least he's playing an opportunistic character we aren't supposed to like, but his presence makes me nervous. It makes me feel bad for disliking Sonny so much last season.

Time will tell how this season will develop, but the first three episodes certainly seem up to the quality of season one. Treme premieres at 10 p.m. EDT/PDT and 9 p.m. CDT Sunday on HBO and will air at the same time each Sunday for its 11-episode season.