Second in line to a family's imaginary throne 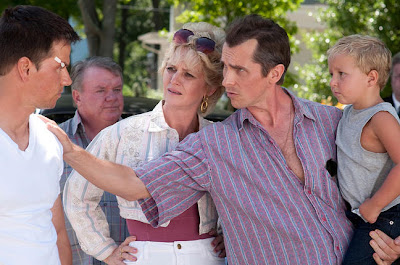 By Edward Copeland
Micky Ward has spent his entire life as the youngest member of a large, brash, blended Lowell, Mass., family, hearing tales of how his older half-brother Dickie Eklund became "the pride" of their working class Irish town during his heyday as a prize fighter when he met Sugar Ray Leonard in the ring. Never mind that Dickie lost or that his life since has been a mess of drug addiction and crime, his family still awaits his inevitable boxing comeback despite the fact he's getting older and older and more addled.

Of course, Micky also is aging and has developed into a promising boxer in his own right, though he keeps missing chances at better bouts and possible title shots because he's managed by his mom who still thinks he should wait until after Dickie gets another chance, however unlikely. The true story The Fighter tells marks a real change of pace for director David O. Russell and provides yet another example of a 2010 film with a remarkable ensemble of actors.

Mark Wahlberg stars as Micky and also serves as a producer on The Fighter. (Wahlberg has practically become a producing machine, mainly on HBO where he's one of the producers of Entourage, How to Make It in America, In Treatment and Boardwalk Empire. He has really grown as an actor, beginning by being one of the weaker performers in good films before becoming the best aspects of lesser films until his talents equaled the quality of many of his movies.

In The Fighter, even though he's the lead, either Wahlberg's instincts or that of director Russell realized that Micky Ward lives in a universe populated with so many colorful characters that gives other actors the chance to be showy, he wisely pulls back, letting Micky be the subtle center of the story. It could very well be Russell's influence since this is their third collaboration (with rumors of a fourth to come) after Three Kings and the strange mess called I ♥ Huckabees, where Wahlberg gave the best performance.

When I say the ensemble supporting Wahlberg truly works overtime strutting their stuff, that is not an exaggeration. In fact, in some cases (mainly the smaller roles of Micky's seemingly endless array of trashy half-sisters) the performers go beyond over the top. Then again, the extended family Micky Ward belongs to makes for such a crowded canvas, they probably had to stomp and scream constantly to get anyone's attention. For the larger roles, the well-known actors may face charges of criminal overacting as well, but it's winning two of them a lot of awards, so I'm sure they have no regrets.

Christian Bale may give his best screen performance as Dickie, avoiding the cliches of a drug addict and modulating the different tones and moods of his character's dashed dreams perfectly. To think that Bale has been consistently good since first being noticed as a youngster in Spielberg's Empire of the Sun and that he escaped the usual child actor traps to keep his career going and his skills getting better as well.

Melissa Leo does a turn as the matriarch Alice Ward unlike any I've ever seen this favorite of mine play. At times, with her blonde-shock wig and a cigarette dangling from her mouth, she resembles an even lower-class version of Anjelica Huston's Lilly from The Grifters. Coming so soon after Leo's triumph on the big screen in Frozen River and on the small in Treme, it's great to see this wonderful actress finally getting the praise that's been long overdue.

Amy Adams also gets a part that doesn't resemble anything she's portrayed before. She plays Charlene, the barmaid who becomes Micky's girlfriend and who can give back as good as any of Micky's family tries to give her, thinking she's a bad influence because she backs his decision to try to go with a professional manager who might help Micky find success and money in boxing as opposed to the ever-controlling Mama Alice.

Finally, it's really nice to see Jack McGee get a solid role as George, Micky's father, after his unjustified dismissal from the series Rescue Me that led me to stop watching that show.

I didn't realize until I watched the credits (or I had known and forgotten) that Darren Aronofsky served as an executive producer on The Fighter, so with this and his Black Swan, he was involved with two of 2010's most interesting movies.

As I mentioned earlier, The Fighter is quite a change of pace for director David O. Russell, but then again, each film he makes seems that way. It's hard to pin him down, but he's made a good one here. His direction isn't showy, but it doesn't have to be with this cast of characters.