When the Levees Broke, Acts I and II

"You had to have your heart broken if you love this country and watched the slow federal response to Katrina."
Historian Douglas Brinkley 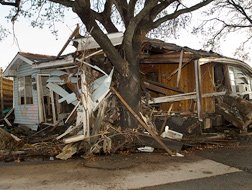 By Edward Copeland
Almost exactly a year after Hurricane Katrina devastated New Orleans and the Gulf Coast, it's easy to forget how sad and angry watching the crisis unfold left you — especially with all the new outrages, examples of government incompetence and personal losses we've endured in the interim. That's what makes Spike Lee's excellent HBO documentary When the Levees Broke: A Requiem in Four Acts all the more timely — so we don't forget the emotions last year's cataclysm evoked. 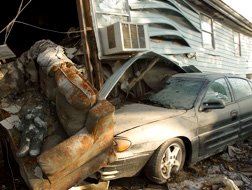 Acts I and II aired last night. The final two acts will air tonight. The way Lee has constructed his film, your anger bubbles and bubbles and bubbles as the documentary progresses — and I've only seen half of it so far. I can't imagine how I'll feel by the film's completion tonight. Lee approaches the material in a straight-forward way, interspersing footage from last year's events with countless interviews with officials, experts and New Orleans residents offering witness testimony. There needn't be flashy tricks or stacking the deck in order to rile viewers — the scenes and the testimony make the case for the amazing human toll wrought by this weather disaster and the failures on all levels of government to respond quickly and effectively to the pleas for help. Rhetoric is unnecessary when you see the harrowing rescues from flooded attics and the haunting images of corpses floating in the flood waters. 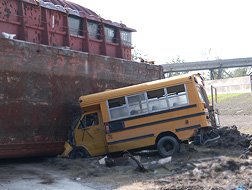 What's most remarkable about the first half of Lee's documentary are the facts and anecdotes that were new to me, especially when you learn how the exaggerations and rumors of crime and government-dynamiting of the levees began, some dating back as far as massive New Orleans flooding that occurred in 1927. There's also more insight into the political infighting between Louisiana Gov. Kathleen Blanco and New Orleans Mayor Ray Nagin: Nagin endorsed the GOP candidate for governor, now-Sen. Bobby Jindal, when he ran against Blanco and Blanco still nursed the grudge, even when it got in the way of helping the citizens of Louisiana. Of course, the biggest outrages fall on federal shoulders as FEMA Director Michael Brown gets in over his head and Dubya plays air guitar while New Orleans burns. As Robert Rocque, a resident of New Orleans' devastated lower ninth ward observes, Bush is the "type of person who gives C students around the world a bad name."

In the end (at least of the first half), When the Levees Broke is less about fingerpointing and placing blame than leaving a historical record of the disaster for future generations to see. It seems wrong to say I'm looking forward to watching Acts III and IV tonight — this isn't a movie you watch for entertainment, it's one you watch for edification and if the first half is any indication, the entire piece will prove a lasting landmark.

Comments:
I think the thing that made me the most angry was that a combination of political and infrastructure failings doomed the city. It just never had a chance. For years, they repainted the facade of the "party town" while the wood beneath was rotten. Insuffecient levees. Inept and corrupt police. Political infighting on all levels. No federal preparedeness. It was angering and frustrating.