Another season, another reason 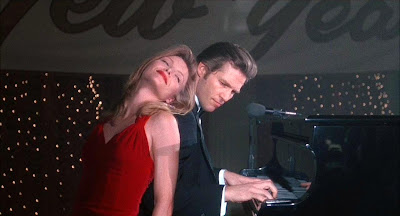 By Edward Copeland
It's a cliche to say, "They don't make 'em like they used to." It's downright depressing when that trite saying is being employed to refer to a film such as The Fabulous Baker Boys that is just marking its 20th anniversary. Has Hollywood really degenerated this much this fast? In 1989, this was a big studio release. Now, we'd be lucky if someone would pick it up as an independent feature. Maybe if the Baker Boys were built out of Legos or transformed into robots.

When I first saw Steve Kloves' film in 1989, while I liked it, I didn't know quite what to think of it because it really was unlike any major studio release I was used to at the time. Here it was though: a film more like a tone poem than a heavily plotted release with Warner Bros. behind it and marquee names such as Sydney Pollack and Paula Weinstein backing a first-time writer-director on a film whose commercial prospects must 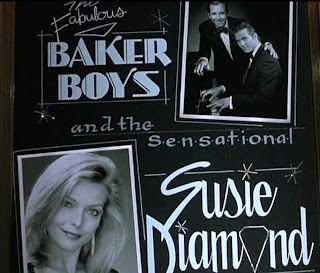 have seemed limited. Before Kloves made The Fabulous Baker Boys, his main credit was as the screenwriter of the good but largely forgotten coming-of-age film Racing With the Moon starring Sean Penn, Nicolas Cage and Elizabeth McGovern. Michelle Pfeiffer's star was just beginning to rise, but she couldn't be counted on to lure in audiences. Jeff Bridges was a much respected actor but hardly box office gold and that was even more the case with his co-star, brother Beau. They even dared to allow a film with an open-ended, ambiguous ending. Still, they took the chance and allowed this film to be made and it is one that grows better and better with each viewing, even though I know deep down that if all the planets hadn't been in alignment at the right moment in the late 1980s, this film gem would never have been made. That makes me sad. It also makes me sadder to think of Kloves' career direction. He made another film as writer-director, Flesh and Bone, a mixed bag of a movie most notable for first gaining notice for Gwyneth Paltrow. Since then, he's been purely a screenwriter, albeit a great one, doing a faithful and solid job at adapting Michael Chabon's Wonder Boys and adapting every single Harry Potter book with the exception of The Order of the Phoenix. He got the job because The Fabulous Baker Boys is one of J.K. Rowlings' favorite films. Still, I wish Kloves had the chance to write and direct his own original work again.

Still, even if Kloves never directs again, he's left us a great one in The Fabulous Baker Boys where seemingly 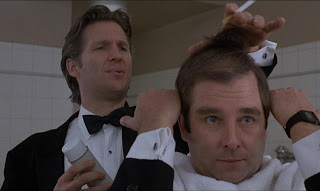 every aspect is top notch, from Dave Grusin's moody, jazz-like score which seems in perfect harmony with Michael Ballhaus' cinematography, full of smoke and shadows, almost creating a color noir look to this tale of two piano-playing brothers. You're never quite certain where this film is heading because plot is almost irrelevant, yet Kloves creates a fictional universe with such complete confidence that it's never a concern. Having real-life brothers Jeff and Beau Bridges play Jack and Frank Baker was a brilliant stroke. Not only do the true siblings have a short-hand that only a lifetime of knowing each other could have brought, Baker Boys also gives each of the actors what may well be their finest feature film roles. Most of Beau's best work came on TV after this, but his Frank is memorable as the passive-aggressive control freak, who fancies himself the business brains behind the act and who works to support his wife and kids, even though he knows that his brother is the one with the greater talent. Jack though is the center of the film and Jeff 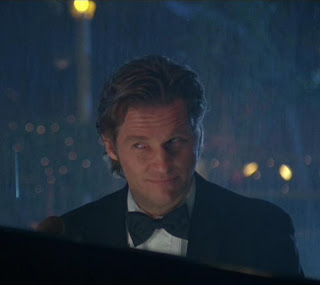 Bridges is superb as the chain-smoking, borderline alcoholic who hates the redundancy of his life and would rather be playing what he wants instead of the same set for the umpteenth time. He can be cruel and as one character describes him, cold as razorblades, yet he still takes time to be a pseudo-surrogate dad for the young girl who lives upstairs from him and frequently is abandoned by her mother for her frequent boyfriends. Bridges has been great so often in so many films sometimes it's easy to forget about him, but I've never forgotten his Jack Baker. Of course, the third member of this acting team is Pfeiffer as Susie Diamond, the singer the brothers hire when Frank decides that perhaps they need a vocalist to jump-start the act. Pfeiffer's work is both sultry and superb and there's a wisp of sadness when you remember when Pfeiffer was on the rise before she began turning down great roles and appeared to commit career suicide in crap such as I Am Sam. Susie not only revitalizes the act, she creates friction about other changes. When one of Frank's kids get sick and he has to let Jack and Susie perform alone, the two relish the chance to change the playlist. When Frank learns later they skipped "Feelings," an argument ensues over whether the song is filet mignon or parsley. In terms of movies, The Fabulous Baker Boys is most definitely filet. In fact, 1989 may be the most recent year to serve up so many delectable entrees and desserts in the form of movies. From the masterpieces to the solid good times, it truly was an amazing year and The Fabulous Baker Boys is another example of what cinematic magic that movie year managed to bestow as gifts to us who worship films.

Comments:
This is a great film in a lovely, understated way. As you point out, the plot really isn't all important as this is a character piece, about two brothers.

I've always been a big fan of Jeff Bridges' work and he really does an amazing job in this film. He's not afraid to play a character who is unlikable at times.

I think that what really gets me every time I watch this film is the mood and atmosphere that Kloves creates. I'm a sucker for films set in smoky clubs and bars and he really nails the vibe of these places.

Edward Copeland's review is the best I've read on this wonderful film. I watched it yet again this evening (this makes several dozen times now). Acting, script, cinematography, sets, and, of course, the music--a mosaic--musical film noir (in color yet). The main theme is a fine haunting composition--written (performed?) by Dave Grusin. Grusin is one of the most under-appreciated and unrewarded composers in Hollywood (though this film did receive well-earned critical recognition; and I belive Michelle Pfeiffer won an Oscar). In brief, EVERYTHING in it worked for me! I hold out hope for a blu-ray release so that I can happily budget in money for two more copies.
Wayne Page

Thanks Wayne. Alas, while Pfeiffer won just about every critics award that year, the Oscar went to Jessica Tandy for Driving Miss Tandy.

Hi Edward, I'm sorry I came across this post rather late in the day but I just wanted to let you know how much I enjoyed it.
The Fabulous Baker Boys has been one of my favourite films for many years and I was starting to feel like the only person who has got anything good to say about it.
Your review does it full justice and I also share your sentiments on the career of Steve Kloves, what a waste of a great talent. I love Flesh And Bone as much as Baker Boys and I can never get enough of these two classic films.
Thanks again for this post, reading it has made my day!

Thanks Paul. Maybe with all the money he has to have made writing the Harry Potter movies, Kloves will be able to set out and do something great again.