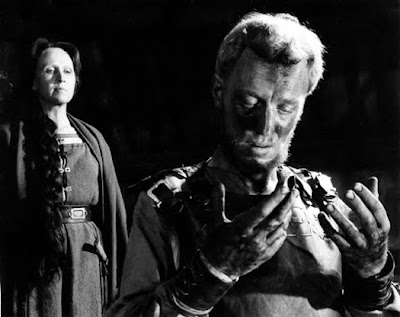 By John Cochrane
Many people will persuasively argue that the division between the classic and modern film periods is the beginning of the French New Wave — that period the late '50s and early '60s, where directors such as Godard, Truffaut and others were taking the world of film by storm with new experimental ways of shooting, editing and storytelling. While this was occurring in France though, Ingmar Bergman also was creating a new film language of his own in Sweden — pushing the art of filmmaking into areas it had never really gone before. Evolving from more conventional work into his own style since the mid 1940s, his one-two punch of The Seventh Seal and Wild Strawberries in 1957 stretched the boundaries of what movies could be about. Instead of just entertaining audiences with escapism, Bergman asked tough questions about God, the meaning of life, mortality and morality. His films were dreamlike, stylized and intellectual. Many of his detractors said he was pretentious. He was not pretentious, but poetic — and he created some of the most memorable words and visual images ever to be projected onto a movie screen. Today marks the 50th anniversary of the U.S. release of The Virgin Spring (1960), Bergman’s 22nd film, arguably his fifth or sixth masterpiece and possibly the most haunting and heartbreaking story he ever told.

The Virgin Spring is based on a 13th century Swedish ballad called “Tore’s Daughter at Vange.” It tells the story of a beautiful blonde girl named Karin, who is brutally raped and murdered by three herdsmen while on her way to church to present offerings from her family. The herdsmen then end up seeking shelter at the farm of Karin’s parents and inadvertently reveal their identities when they offer Karin’s blood-soaked clothing to her mother, Mareta. Tore then traps and kills the three herdsmen. He is later horrified by his own actions and asks God for forgiveness — promising to build a church of stone to atone for his sins.

“Tore’s Daughter at Vange” is a simple story, but Bergman — along with screenwriter Ulla Isaksson and cinematographer Sven Nykvist — elevate it to a great one, by fleshing out the characters and adding emotional complexity to the narrative. Added to the script is the character of Ingeri, Karin’s foster sister — who accompanies Karin on the journey and secretly witnesses her attack. Ingeri is a pagan who has been dishonored by an unexplained illegitimate pregnancy, and hates Karin for being everything she is not. When the film begins, we see her praying to the Norse deity Odin, asking him to bring great harm to her half-sister. She later feels tremendous guilt, and asks Tore to blame and kill her for Karin’s death. Isaksson and Bergman also humanize the killers. It is through the eyes of the third herdsman — a young teenager — that we witness the horror of Karin’s murder. He effectively becomes the film’s conscience — as he tries to cover up her corpse and vomits in revulsion after his brothers have left him at the scene of the crime. In “Tore’s Daughter at Vange,” the sudden spring also wells up under Karin’s body, right when she is killed — but Bergman and Isaksson move this plot point to the end of the story. When Mareta cradles her dead daughter in her arms, the water spring begins to flow — seeming to validate Tore’s cry for forgiveness, as well as provide a cathartic release for the characters of the film.

The Virgin Spring marks the first time that Bergman worked with Nykvist as his director of photography. (Nykvist previously did some secondary work on Bergman’s Sawdust and Tinsel in 1953.) They would go on to make 16 movies together, forming arguably the greatest director/cinematographer partnership in the history of film. In The Virgin Spring, Nykvist seems to be emulating the classical black and white contrasting style of Bergman’s great 1950s cinematographer Gunnar Fischer. (Indeed, the similarities of setting and style to The Seventh Seal, as well as the presence of Bergman veteran Max von Sydow in the lead role, make the two films feel like companion pieces — though The Virgin Spring has a more naturalistic, immediate feel to its story than it’s more iconic and better known predecessor.)

Nykvist’s own unique stamp wouldn’t begin to show up until Bergman’s next major work Through A Glass Darkly (1961). But The Virgin Spring is filled with mesmerizing cinematography. The camera shifts back and forth from presenting shimmering forest vistas that seem to come right out of a fairy tale, to religious imagery from Christianity and Paganism, to harsh violent realism in the murder scenes. Sometimes the camera pulls back in an attempt to give us God’s point of view. At other times, it seems to be penetrating into the souls of the characters - indicating anguish or dread. Ingmar Bergman once said that there was nothing more interesting to photograph than the human face, and by the time of The Virgin Spring, we can see he and Nykvist already were masters of the close-up. The shots of Karin’s face in shock after she’s been attacked and slowly realizing that her self-centered, blissfully naïve life is about to end are chilling, as are those of the young herdsman — whose fear and guilt substantially increase when he discovers whose farm he and his brothers have taken shelter in. Also unforgettable is the stone poker face expression of Mareta when she recognizes her daughter’s bloody dress. It’s not hard to see the influence of Carl Theodor Dreyer’s claustrophobic masterpiece The Passion of Joan of Arc (1928) here, and The Virgin Spring could play easily as a silent film.

The most memorable passages in The Virgin Spring are the killing sequences. The rape of Karin was so controversial, Bergman had to fight tooth and nail to keep it from being censored. Some places — such as Fort Worth, Texas - banned the film for this reason. Others groups cut The Virgin Spring, showing it in truncated 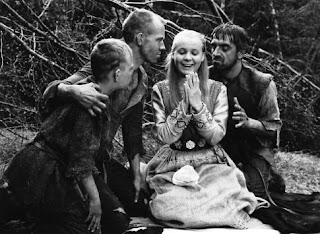 versions — which often became the norm for screenings and video for years. The crime, as Bergman presents it, is not graphic, gratuitous, or gory — but horribly sad. Karin first invites her attackers to eat with her in a friendly gesture, and then is trapped on all sides — her undergarments pushed aside, as the herdsmen hold her down and assault her. In her excellent audio commentary for the Criterion Collection, Bergman scholar Birgitta Steene talks about how the camera implicates the audience as a witness — pulling in for intimate shots and then cutting back as an impartial observer during the scene, which is almost silent. When Karin finally gets up, she barely has the will or energy to scream or cry — instead just whimpering like an animal in shock. She’s bludgeoned to death, and robbed of her clothes and valuables. (Bergman shows restraint here — in the original poem, Karin is decapitated.) It is remarkable how powerful the scene is, bearing comparison to Alfred Hitchcock’s famous shower scene in Psycho (1960). You are horrified, but you think you see more than you do. Both directors knew the power of restraint, and letting the audience fill in the gaps with their own imaginations.

The revenge sequence begins with Tore preparing himself in a samurai ritualistic fashion, and Bergman and Nykvist continue to provide memorable imagery. We see a long shot of Tore struggling with a lone birch tree, before finally taking it down — indicating his internal psychological conflict between Christian morals and his anger and need to avenge Karin’s death. When the first of the herdsmen is stabbed to death, the final resting position of his corpse makes it look like he’s been crucified. The second herdsman is burned to death on a fire pit — the flames surround him and Tore as they wrestle, as if they are trapped with in the confines of Hell. Only after killing the teenage herdsman with a brutal head blow, does Tore realize he’s gone too far. (Mareta’s motherly instincts take over as she tries to shield the boy from Tore, but neither she nor Tore knows that he was not actively involved in Karin’s death.) 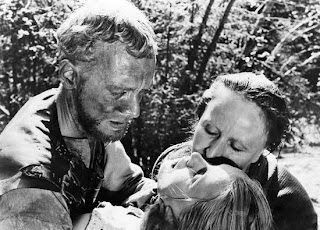 The story ends with Tore and Mareta leading a search group to retrieve Karin’s body. Ingmar Bergman would soon begin making a series of stark, chamber films often referred to as The Silence of God Trilogy (1961-1963), but he already was examining the idea of a distant god in The Seventh Seal and again here in The Virgin Spring. As Tore kneels and prays to God, asking why he has let these horrible things happen, the camera views him from behind and from a distance, much in the same way it viewed the aftermath of Karin’s murder. Tore promises to build a church on the place of Karin’s death, and the spring bubbles forth when her body is moved. Though the characters seem to take this as a miraculous sign of hope, you get the sense that Bergman — one of the cinema’s most famous agnostics — is not as certain.

The Virgin Spring was criticized in France and Sweden upon its release — though it fared much better in the United States, where it earned Ingmar Bergman the first of his three Academy Awards for best foreign language film. It also went on to influence future filmmakers such as Wes Craven — who modernized the story in his debut feature Last House On The Left (1972) — as well as other meditations on violence such as Sam Peckinpah’s Straw Dogs (1971), starring Dustin Hoffman. Some of these pictures may be well made and fascinating to watch in an exploitative kind of way, but they never approach the high art and moral soul searching of Bergman’s work.

Ingmar Bergman — always sensitive to criticism — grew to dislike The Virgin Spring, calling it an aberration in his career. It is also not usually mentioned among his critics or fans as one of their favorites. That’s too bad, because it’s really a terrific film. Bergman would continue to cement his legendary reputation with more psychological, inter-personal masterpieces throughout the 1960s and 70s, becoming one of the most famous directors in movie history — his name synonymous with foreign film and inspiring many imitators and parodies. His work may not be as in vogue today as it once was — probably due not only to changing tastes, but the much easier ability to now view other foreign directors’ movies on DVD. But his films remain a testament to his influence and greatness. The landscape of modern film is unthinkable without Ingmar Bergman, and The Virgin Spring is one of the peaks in an unparalleled career.

Comments:
That's one of the greatest things about Bergman is watching his evolution as a filmmaker. The greatest ones always do while others seem to just hit a level and coast. Is there much that really separates Ron Howard from the beginning of his career to his later projects? I'd feared the Coens were on the same path, repeating the same style over and over again until they took their craft to a higher level with No Country for Old Men and A Serious Man. Richard Linklater is nothing if not eclectic, but not in that colorless Marc Forster way. It's like reading Updike in order and watching his craft and his risk taking grow with him.