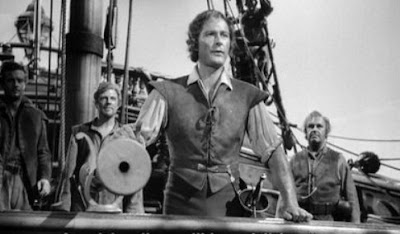 By Eddie Selover
Probably no actor ever got luckier with a first starring role in the movies than Errol Flynn. At the age of 25, he was given the lead in Captain Blood on the basis of his looks, intense lobbying by some well-connected lady friends, and the fact that the film had no leading man and an imminent start date. At the time, Flynn’s experience amounted to a year of repertory theater in England and minuscule roles in about four B-movies. Raw-boned and gauche, he acquired authority and panache as filming went on, so much so that the first sections of the movie were re-done at the end of the shoot.

But what made Flynn lucky wasn’t just the opportunity. Captain Blood is still the greatest pirate movie ever made — thanks to clever, dynamic direction by Michael Curtiz, a stirring score by Erich Wolfgang Korngold, and a strong cast including villainous brigand Basil Rathbone and 19-year old leading lady Olivia de Havilland. De Havilland had as little experience as Flynn, but as Rathbone wrote almost 30 years later, “a more enchantingly beautiful young girl it would be impossible to imagine.”

A big hit, the movie was nominated for the best picture Oscar (it was beaten by the far inferior sea epic Mutiny on the Bounty) and made Flynn a huge star overnight. More than that, it established a template that Warner Bros. followed, more or less, for the next couple of decades. Flynn made 12 movies with Curtiz, seven with Korngold, three with Rathbone, and eight with De Havilland. But as fate would have it, he made only one more swashbuckling pirate movie for Warners: The Sea Hawk, which debuted 70 years ago today. 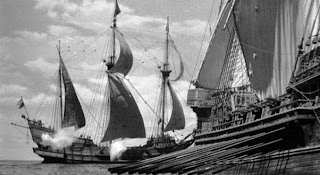 Among movie buffs and Flynn fans, The Sea Hawk is highly regarded. There’s a lot to like about it: Flynn, here at the peak of his career, has far more acting authority than he’d had in Captain Blood; Curtiz and Korngold are back with their typically first-rate work; and Warners poured almost $2 million into the production at a time when a movie could gross half that amount and be a hit. In fact, the studio built a huge new soundstage and tank just for this film, as well as two full-scale sailing ships that were moved by hydraulics. The movie also re-purposed huge, vaulting sets and beautiful costumes from the previous year’s Flynn vehicle, The Private Lives of Elizabeth and Essex.

But as good as it is, The Sea Hawk doesn’t quite make it onto the list of truly magical movies. The cast and crew are in there pitching, and everyone does a professional, workmanlike job. Swords clash, sea shanties are sung, hordes of sailors swarm over the riggings, dark deeds are plotted in castles, galley slaves mount an escape…and yet you don’t particularly care about any of it. The reasons, I suppose, lie in the script and a couple of crucial casting mistakes.

Captain Blood was based on a novel by Rafael Sabatini and had a literary and beautifully structured screenplay by Casey Robinson. The Sea Hawk was ostensibly based on another Sabatini novel, but in fact used only the title. The original screenplay was by Seton I. Miller and in fact had a different title — Sabatini’s was used as audience bait (his name still meant something in 1940) and because, well, it’s a great title.

Miller’s screenplay was rewritten and sharpened by Howard Koch, a fine writer who had an instinct for how to punch up scenes with intelligent, ironic dialogue. Koch had the idea to make the story more timely by turning it into a metaphor for real-life events — England was already at war with Nazi Germany, and in the two years before the U.S. joined them, there was a widespread effort at solidarity and support in Hollywood. Koch’s angle was to turn Phillip of Spain into a Hitler intent on conquering the world, and Queen Elizabeth into a Chamberlain who attempts appeasement and then a Churchill who fights back openly. 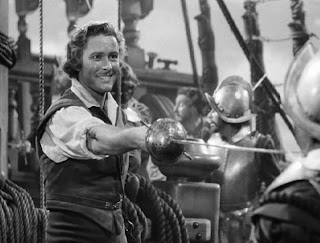 Flynn’s character, Geoffrey Thorpe, is a gentlemanly sea captain who turns pirate in order to covertly serve the Queen and her political needs. Thorpe isn’t a great character like Peter Blood, a foppish doctor sold into slavery who becomes a pirate out of outrage and a desire for revenge — Thorpe is more like one of the anonymous G-men from innumerable Warners pictures of the era. While that may have satisfied the politics and censorship demands of 1940, it robs the movie of some fun…these are the cleanest and most morally upright pirates you’ve ever seen. Flynn, who wanted to be a serious actor and resented swashbuckling roles, plays the role in a restrained and almost dignified way, and you wonder why the inevitable haughty wench on board (the Spanish ambassador’s niece) doesn’t see what a great guy he is right away.

The haughty wench is a problem, too. Maureen O’Hara perfected this part in the 40s; it’s too bad she didn’t meet up with Flynn until 1952, when drink and dissolution had made him a shadow of his former self. Here, the wench is played by Brenda Marshall. Who? Exactly. This movie was Marshall’s big chance, and it must be said that she muffs it. Her acting is wooden and totally conventional, her face a mask of pouting unhappiness that seems more related to her own personality than to the role. Marshall can’t even make you smile at a line like “Uncle, my jewels!” as her bedchamber is invaded by pirates.

Where’s Olivia de Havilland? At the time, she was fighting Warners for respect and better roles, and wanted something more than to be Flynn’s leading lady. She only played with him a couple more times before going on to prestige movies and a couple of Academy Awards. In her old age she seems to have realized, like Ginger Rogers and Myrna Loy, that her romantic partnership onscreen is her greatest claim to immortality. De Havilland and Flynn had a beautiful rapport as actors — his rashness and boldness seem to excite and offend her at the same time, which is quite funny; her gentle sweetness brings out a sensitivity in Flynn that almost seems to surprise him. “I really believe that he was deeply in love with her,” commented their co-star Bette Davis, and the feeling was very evidently mutual.

Marshall and Flynn, in contrast, have zero chemistry. And so you’re left to ponder the rote quality of so many old movie romances: hidden attraction, conflict, cleared-up misunderstandings and declarations of love, separation, longing and heartbreak, reconciliation, kiss, fade-out. The situation isn’t lost on Curtiz, who resorts to director’s tricks to make this non-romance come alive. When the two are parted, he alternates shots of them looking longingly into the distance as Flynn sails away — the movie seems to be shouting “LOOK, THEY’RE IN LOVE WITH EACH OTHER!!!”

The villains aren’t much better. Claude Rains returns from Flynn’s Adventures of Robin Hood, but he has no memorable lines and lets his evil haircut and facial hair do his acting for him. In Captain Blood, Lionel Atwill played basically the same role and gave it dark hints of sexual obsession and sadism (OK, maybe it wasn’t too much of a stretch for him). Rains just coasts here. In Robin Hood, he was beautifully paired with Rathbone, who played the fiery man of action to his sly rascal. Here, the Rathbone role is filled by Henry Daniell, and that’s a pale carbon copy. Flynn’s chemistry with Rathbone was as magical as his rapport with de Havilland — they had the same energy level, and when they hurled challenges and insults at each other, you felt an underlying respect and affection. At some very elevated level, they were playacting, and every scene they shared crackles with exuberant antagonism. 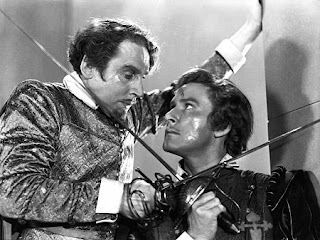 Daniell, on the other hand, apparently was the cold fish he always played, and as an actor he had only one note of sneering superiority. And in fatal contrast to Rathbone, the best fencer in the business, he couldn’t handle a sword. A studio memo from the middle of production reported that “Mr. Daniell is absolutely helpless and his closeup in the duel will be mostly from the elbows up.” As in all Flynn swashbucklers, the climax is supposed to be the big duel to the death, but Daniell seems to barely be in the scene. As with the romance, Curtiz is forced to use director’s tricks to make it come off. Longshots, doubles, heavy shadows, furious cutting. Workmanlike, but unmagical.

Many commentators on The Sea Hawk have also noted the absence of Technicolor, but the movie does have strong black and white photography. This was an economic decision which allowed Warners to re-use battle shots from Captain Blood and a couple of other older epics…It also allows for a nice effect during the movie’s best sequence: a trap laid for Flynn and his men in the jungles of Panama. Sepia gives this sequence a real feeling for the heat of the swamps and the misery that our heroes endure, and it helps break up the movie as well — at more than two hours, it’s rather a long journey. Finally, England is once again purged of treason; the lovers are reunited, the trumpets flare, and the Warners' shield announces The End. You’re left admiring the craftsmanship that went into mounting this sea epic on a soundstage, but you haven’t ever really sailed away.

Eddie Selover is a writer and film buff living in Orlando, Fla.

Comments:
I found "THE SEA HAWK" a lot better than "CAPTAIN BLOOD", which I don't consider to be the best pirate movie ever made.