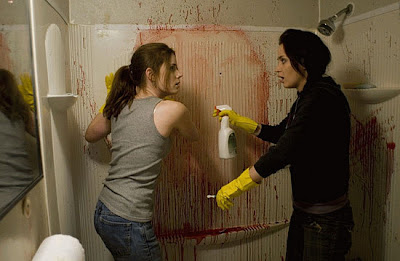 By Jonathan Pacheco
Sunshine Cleaning gets its emotions and characters right, but feels the need to force them into specific situations. It leaves long stretches of story untouched, allowing the characters to be, exist, and reveal, only to intervene at somewhat critical points to steer the story in the direction it planned on going. This results in the audience member yelling at the film, “Get out of the way!”

The idea of the plot intrigues — two sisters, Rose and Norah (Amy Adams and Emily Blunt), decide to go into the crime scene cleanup business — but the way it reached that scenario felt contrived. First, the idea is “casually” tossed out by Rose’s married lover, Mac (Steve Zahn), a cop who claims Rose could make good money off a racket like that. When her son’s principal recommends that she put the boy on medication, Rose neglects caution and pulls him out of the school that minute, insisting he only receive the best education that money can buy. She needs more cash for a school like that. Luckily, Mac’s got an idea: what about that crime scene cleanup racket he casually mentioned before?

Once Sunshine Cleaning gets past this blunt hump, it cruises along nicely as the characters have time to breath, even allowing important plot developments to feel as if they happen on their own. While cleaning a particularly nasty scene at a trailer home, Norah discovers a fanny pack with the deceased’s ID and pictures of her daughter. Norah feels that it might be their duty to inform the daughter of her mother’s passing, but Rose disagrees, prompting Norah to simply do it on her own. The film doesn’t take the easy way out in the relationship between Norah and Lynn, the daughter in the pictures (Mary Lynn Rajskub), who doesn’t know Norah’s true intentions. The story takes some turns, complete with not-so-subtle hints at a lesbian attraction from Lynn which is interestingly neither accepted nor rejected by Norah. Typically in films like this, you get the “Whoa, hey, I think you got the wrong impression” moment, but Sunshine Cleaning intriguingly allows us to instead try to guess Norah’s thoughts. Is she open to this kind of attraction? Is she not rejecting it to keep the relationship alive? I don’t know, and the film doesn’t spell it out for me either. I like that.

The same goes for Rose’s relationship with Winston (Clifton Collins Jr.), the helpful, perceptive one-armed owner of the cleaning supply store. The film nurtures an attraction, especially on Winston’s part, allowing it to grow, rarely forcing circumstances to meet at certain end. Eventually the attraction reaches a level where it’s obvious to everyone that there’s something more to these two, but the film doesn’t draw any conclusions for its audience. Refreshingly, no blatant declarations are made as you are allowed to decide for yourself what happens next. To make things even better, the chemistry between Winston and Rose feels genuine. I looked forward to scenes between the two characters (and actors) because of the pleasing nature of their attraction.

It’s hard to say more about Amy Adams. The material in Sunshine Cleaning isn’t particularly challenging for her, but the character of Rose did have a few small twists that gave Adams a little bit more to do. She’s played many innocents throughout her career, from Junebug to Doubt to Enchanted to even, in a way, Charlie Wilson’s War. Rose is still a sweet character with good intentions, but she lacks the same innocence as the past roles. She sleeps with Mac behind his wife’s back, and while the main point of the affair is that Rose hopes that Mac will one day leave his spouse for her, I also see it for one of the obvious reasons: Rose likes sleeping with Mac. It’s not an overt trait, but Rose is more sexual than most characters that Amy Adams has played before (with the possible exception of her role in Miss Pettigrew Lives for a Day, which I’ve yet to see). Mix that in with the classic Amy Adams charm, and you have an ever-so-slightly different animal in Sunshine Cleaning.

Alan Arkin brings an amusing, if somewhat forgettable, touch to the film as the father of Rose and Norah. Most of his interaction is with Rose’s son, as he ropes him into several of his endless hair-brained business schemes, always looking to make a quick buck. In this light he reflects his character in Little Miss Sunshine, as does the general feel of Sunshine Cleaning (not surprising, as the two films share the same producers). However, it’s hard to find much purpose in his character other than a pleasant, occasional diversion from the main action.

I initially had no interest in seeing Sunshine Cleaning until I watched the trailer. The concept sounded like a great one until the trailer featured moments when the characters forced too much meaning on events. “We come into people’s lives when they have experienced something profound and...we help.” That’s when I got a vibe about the film, worrying me that it would try too hard to have an impact. The actual film is not nearly as sappy or ham-fisted as the trailer, and even takes a few daring steps in certain stories and endings, but it still contains that bit of forced meaning and sentimentality that hinders it from being anything more than just “a nice film.”

Comments:
What did you think of Emily Blunt in the film?

I haven't seen her in much before Sunshine Cleaning (I guess she was also in Charlie Wilson's War, but I'm having trouble placing her. She didn't blow me away in this film (probably why I didn't mention her much in the review), but that's okay because she's still fairly decent. The whole backstory involving the girls' mother (which focused more on how it affected Norah than Rose, I feel) didn't do much for me, so some of Norah's "bigger" moments, such as the one at the train tracks, didn't have the impact on me that the film was going for.

Nevertheless, you could say Blunt still pleasantly surprised me; her looks remind me of Zooey Deschanel, an actress I can't stand simply because she's pretty much terrible in everything she's been in. I think she has talent in there somewhere, but hasn't shown it. Blunt, on the other hand, has some of the looks of Deschanel but shows more talent, as far as I can tell.