A spoonful of sugar helps the history go down 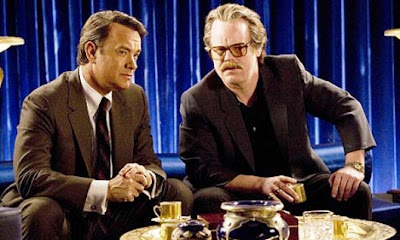 By Edward Copeland
When I revisited Smiles of a Summer Night recently, I was reminded of the line by Desiree's mother that says to beware of good deeds, because they come with a high cost and leave a nasty smell. The phrase seems even more apt when considering the true story of Charlie Wilson's War, Mike Nichols' best feature film in decades. It manages to present history as entertainment and succeeds glowingly on both counts.

Tom Hanks stars as the former Texas representative and once again Hanks gives a performance much better than either of the two for which he won Oscars.

Charlie Wilson was a true product of the 1980s, a hard-drinking, hard-partying member of Congress with a penchant for the ladies, a staff full of big-haired beauties and a slim legislative track record. As he tells one character, he's fortunate enough to represent the one congressional district in the United States that doesn't want anything, so he's free to vote yes a lot and collect a lot of IOUs from other House members.

During a weekend of debauchery in Las Vegas, a 60 Minutes report on the struggles of Afghans in their fight against Soviet invaders catches Wilson's eye. As a member of an important subcommittee, Wilson, almost on a whim, doubles the amount of U.S. dollars being spent on covert activities in Afghanistan.

Wilson's action attracts the attention of a wealthy Houston socialite Joanna Herring (Julia Roberts), who is as right-wing and Republican as Wilson is not but has made the Afghan situation a cause aimed at winning the Cold War. She encourages Wilson to add a trip to Pakistan on to a planned junket to the Mideast so he can meet with Pakistani President Zia (Om Puri), the man who hanged the late Benazir Bhutto's father in a previous takeover in Pakistan.

After an awkward meeting with Zia and his advisers, who were under the false impression that Wilson was an official U.S. envoy, Zia asks Wilson to pay a visit to one of the Afghan refugee camps that have sprouted in his country. The visit is a true eye-opener for Wilson when he sees the plight of the Afghan refugees and meets with the CIA official in charge of the region, who makes it clear that his job is not to draw attention to any U.S. activities or risk making the Cold War into a hot one.

Angered by the station chief's attitude, Wilson flies back to D.C. on a mission, telling his faithful aide (Amy Adams) to get the deputy director of the CIA or higher in his office that morning. The man who arrives instead is a lower-level CIA agent named Gust Avrakotos (Philip Seymour Hoffman), a blustery man with a history of making enemies within the agency.

It seems like a cliche to say that Hoffman gives a great performance since he does it so often, but Gust is another one and he and Hanks bring out the best in one another.

Despite Wilson's anger over not getting the CIA official he wants, he soon learns that he did get the right man and the two set out to increase the budget for covert ops in Afghanistan to help the mujahedeen. Their travels include making unlikely allies in their mission out of Israel and Muslim nations such as Saudi Arabia and Pakistan. Further complicating religious matters, is the boisterous Christian sermonizing of Joanna.

As Gust warns Wilson when trying to downplay Joanna's religiosity, sooner or later, God will end up on both sides of the fight. Roberts' accent as Joanna is a little iffy, but her role is so small that it hardly matters.

The screenplay by Aaron Sorkin is sharp, smooth and never strays from its efficiently told story. Sorkin, whose dialogue grew so generic and predictable on The West Wing, seems to have rediscovered his voice and the ability to distinguish characters from one another.

Nichols, who has concentrated of late on directing on Broadway and in two great play adaptations for HBO (Angels in America and Wit), still has some great moves in his arsenal of tricks.

In addition to keeping the pace perfect, he also has some particularly nice shots, including a stunning pullback view of the refugee camp that's reminiscent of the scene of wounded Confederate troops in Gone With the Wind.

Of course, most people know that the rout of the Soviets that led to the disintegration of the U.S.S.R. had unintended consequences for the U.S., but Nichols and Sorkin still manage to land this denouement like a suckerpunch at the end. As Wilson notes when his pleas to help Afghanistan after the Soviets leave fall on deaf ears, the U.S. always seems to go in places with the highest ideals, but then leaves before the job is finished.

Charlie Wilson's War doesn't make that mistake. It teaches while making you laugh consistently and heartily, then sends you out of the theater to reflect on what was yet to come.

Comments:
I finally got to see this, and I think two things steal the picture: Philip Seymour Hoffman's performance and Julia Roberts' safety pin mascara trick. The latter looked like something out of Dario Argento's Opera, and made me cringe. The former is just great, exactly what a supporting performance should be. If Javier Bardem weren't shooting people with cattle guns this year, Hoffman would be a shoo-in for that Oscar.

The movie itself is fine, Nichols' best since Primary Colors (I hated Closer, and can't see why it got the Oscar nods it did). Tom Hanks showed a little more sliminess than he has in a long time, and the movie doesn't fall into the trap of being overly partisan. I'm surprised this doesn't have more Oscar buzz, as it's the kind of movie the Academy would go for, full of stars, a pedigree behind the camera, and a message.

Tom Hanks and Julia Roberts are a classic combination... Charlie Wilson's War made me feel a little better about U.S. foreign intervention, it seemed to work out that time